CTech will offer comprehensive coverage of Israel’s startup scene, and of Israeli-linked companies traded on stock exchanges in the U.S., Europe, and Asia

First published in 2008, Calcalist is the most widely circulated financial newspaper in Israel, according to a July report by London-headquartered Kantar Media Intelligences Inc., a WPP market research division. 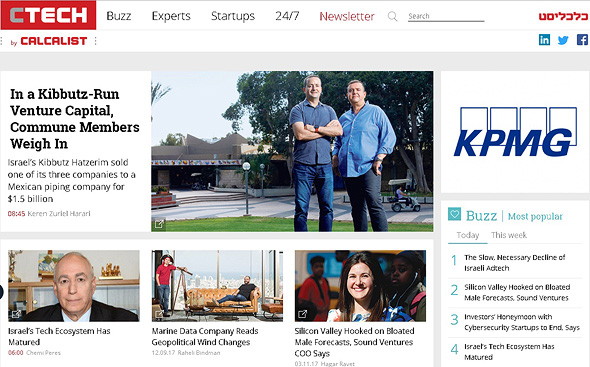 A screenshot of CTech's homepage

Alongside reports about some of the world’s biggest tech companies, CTech will offer comprehensive coverage of Israel’s startup scene, and of Israeli-linked companies traded on stock exchanges in the U.S., Europe, and Asia.

“By launching CTech, Calcalist takes its leading coverage of Israeli tech one step further,” said Calcalist’s founder and publisher Yoel Esteron. “No other publication supplies readers interested in this hotbed of innovative technologies with the width and depth of coverage offered by Calcalist. The newspaper embraces the local tech community as a growth engine for Israel’s economy, and from now on will also be accessible to international audiences.”

“Before the site's official launch, CTech has already signed partnerships with Israeli and non-Israeli entities,” said Steve Shumacher, Calcalist’s CEO. “Like us, our partners know that CTech is the perfect platform to answer the strong market demand for high-quality news about the Israeli tech scene. Like us, our partners realize the business potential of the new platform.”

A CTech app is available on the iOS and Android app stores, and news updates are also available through a newsletter and social media platforms including Facebook, Twitter, and LinkedIn.