Now that the spinners craze is history, it’s time to understand what exactly happened and what lessons can be learned

TAGS:
The story didn’t start on a sunny balcony of a third-floor apartment in Jerusalem in the 1980s.

Catherine Hettinger was spending a summer in Israel with her daughter. After seeing Palestinian kids throw stones at police officers, and since she was looking for something to play with anyway, Catherine came up with an idea for a toy. 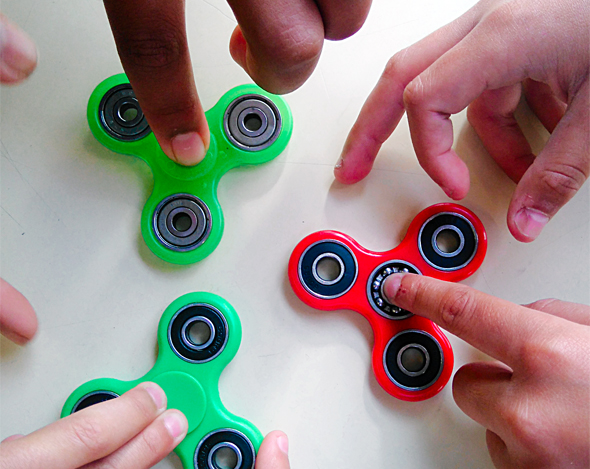 Figdet spinners (Illustration)
A toy that “is designed to be spun on the finger to provide enjoyment” could offer an alternative to throwing stones and eventually put an end to the violence, leading to peace in the Middle East and making Catherine a bit wealthier. A few years later, with a recognized patent in her hands, she went to pitch the toy to Hasbro, Inc., the toy company. The Hasbro people looked at Hettinger spinning her weird little frisbee on her finger but, apparently, they weren’t too impressed. They turned her down. Twenty-something years later, the year is 2016. Kids don’t get bored anymore. They have smartphones and tablets, Instagram and YouTube. When they want to play outside they go hunting Pokémons, the fastest mobile game ever to reach 50 million installs on Google Play. Out of the blue comes a new spinning toy. Last December, Forbes declared: “Fidget Spinners Are The Must-Have Office Toy For 2017.” It took another two months until they made their first major appearance at the North American International Toy Fair in February of 2017, but it was only around April 2017 when spinners suddenly blew up!

By May 2, the 20 most popular items in the games and toys category on Amazon were all different versions of the fidget spinner. 20 percent of all toy and game units sold daily were spinners. People in the toy and retail industry were unanimous in saying that had never seen anything blow up so fast and so huge as the fidget spinners. By the end of June, estimates for the number of spinners that were sold in the world’s 12 richest countries ranged from 20 million to more than 200 million.

Fidget spinners were not the first toys to blow up. A simple plastic hoop did it 60 years earlier.

25 million hula hoops were sold in only four months. Within two years, the number reached 100 million. Wham-O Inc., the toy company that invented and marketed the modern hula hoop gave away free hoops to get the buzz started.

A scene from 1994 film The Hudsucker Proxy, depicts how word of mouth helped the hula hoop catch on. On their way home from school some kids see a boy do his thing with the hula hoop and then they run to get one. They play with it. Then other kids see them and go get their own and so on.

Hula hoops became a signature example of a viral fad that spread throughout the population. The same happened with Rubik’s Cubes in 1981 and with Tamagotchi in the late 1990s, both very popular games that spread by word of mouth.

What changed between then and now is the internet, social media, and smartphone with cameras. This is what caused the spinners to catch on the fastest.

Kids today don’t need to see their friend or neighbor spin in order for the word of mouth effect to happen. They can see a complete stranger do it on YouTube or Instagram, amplifying the effect. More than two million fidget spinner videos were uploaded to YouTube between May and July 2016. Today, there are more than six million online videos of spinners.

Because the fidget spinners are a toy that children discovered and shared on social media the demand came solely from word of mouth. No manufacturer or store or any marketing and PR efforts had anything to do with it.

The sudden out-of-nowhere demand for spinners and the fact that no person or firm had a patent on it and that there were no licensing fees required pushed the toy retailers and manufacturers to rapidly produce and sell spinners. Big Chinese factories, which perhaps previously manufactured smartphone accessories, started producing spinners in huge quantities, but many others started producing smaller amount using 3D printers Small shops that were able to adjust quickly and stock the unbranded goods from wherever they could lay their hand on made a lot of money fast. So did individual entrepreneurs with seller accounts on Amazon. A good example is Allan Maman, a 17-year-old high school student, who started 3D printing spinners in his friend’s basement, making $350,000 within few months.

The spinners case is an extreme example of the short head economy.

In the last several years, since the appearance of social media, we are facing a change in the demand curve. The hits, AKA the blockbusters, on the left side of the demand curve are getting fewer and higher and the long tail on the right side of the curve—the big promise of the internet— is still long but most of it is so close to zero that it is embarrassing. The Pareto 20/80 principle, a symbol for the unfair distribution of anything, is something that we now look back at with Lust. In the "short head" era it is more like a 90/10 or in some cases a 99/1 principle. We would give anything to get back to the just world of the 20/80. On May 4, 2017, one day before the spinners officially reached their peak, Catherine Hettinger, who by then became known and famous for being the inventor of the fidget spinner, launched a Kickstarter campaign, trying to raise enough money to help her manufacture the original spinning toy. On May 5th, the spinners reached their peak. From there it was a slippery slope all the way down to the museum of toys. On June 18, after getting less than 1,000 orders and not reaching her funding goal, Catherine’s project was abandoned.
More By CTech:
In the fidget spinner case, the short head winners were the product itself and quite a large group of Chinese manufacturers, fast retailers, and online sellers. Catherine Hettinger, just like most of us, will remain a bystander.

This column was originally published on The Short Head.

Dan Chen is a digital entrepreneur and business executive. He currently leads business development for Mabaya Ltd., a digital advertising company, and serves as a board member at Dori Media Group Ltd.
Cancel Send
To all comments