TAGS:
The exact net worth of U.S. President Donald Trump is a matter of intense debate and speculation, but, on the blockchain, the sitting U.S. president is worth exactly 151.4 ether, which comes out to about $181,700.

Or rather, that is the price of Mr. Trump’s unique digital token in a new game called CrytpoCelebrites. Calcalist reported last week that a beta version of the game had been launched, and that users have spent a million dollars in virtual currency in 24 hours. 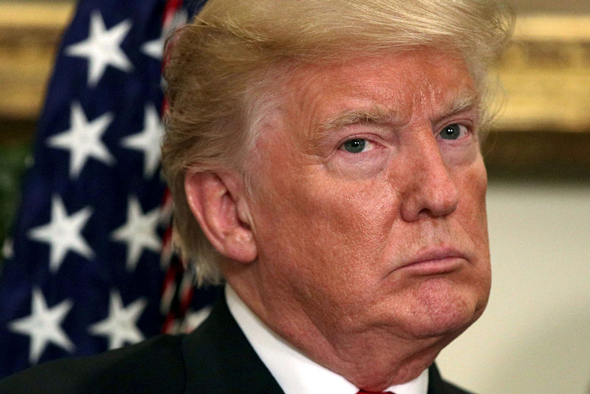 U.S. President Donald Trump. Photo: Getty Images
As its name suggested, the game lets users “buy” celebrity tokens using ether, the cryptocurrency associated with the Ethereum network. Mr. Trump’s is the top-priced token out of 378 celebrities currently on sale. Celebrities have the option of contacting the game’s developers to verify their identities for the right to earn a 3% cut on each sale of their token. After each sale, the price of a token goes up automatically by a certain factor, and someone else can decide to buy the token. Currently, the market value of all the celebrity tokens in the game is about $6.8 million, according to a compilation prepared by one of the members of an online community that has sprung up around the game. That number does not reflect total dollar value of all transactions processed by the site, which is necessarily much higher. A post on CrytpoCelebrities Facebook page says the game has not yet officially been launched and “we are still insisting on a media embargo and refusing any interviews and articles.” Calcalist contacted one of the game’s developers, who said they wish not to be identified because it would put him and his family in danger. “Writing that I'm the creator of the game is like advertising the amount of cash I have around the house,” the person said. The person said that they run of the risk being attacked by someone trying to obtain their private key, a code that could be used to exchange virtual tokens for cash. The fear of being robbed is common in the crypto-community, said Roee Oren, the chief executive of CryptoRated, a website that grades initial coin offerings according to a crowd-sourced analysis of their quality.

Whatever the risk of physical attack, the developers of CrytpoCelebrities say they are confident about the legality of their business.

Related stories:
“CryptoCelebrities is working with top of the line legal consultants to assure that we operate legally according to the laws of the United States,” a post on the company’s website reads. “In short, while it is illegal to use a person’s name or likeness to promote a product or service in a misleading manner, it is perfectly legal to sell pictures or named tokens of any person.”
Cancel Send
To all comments
Buzz