12 boys aged 11 to 16 and their 25-year-old chaperone went missing on June 23 after entering the Tham Luang cave and becoming trapped there by floodwater. On Monday, after more than a week of searches, all 13 were located inside the cave system by divers. It is yet unclear if the boys could be extracted from the cave, as some experts suggest they might have to wait out the monsoon season and be rescued in three to four months when water levels inside the cave subside. 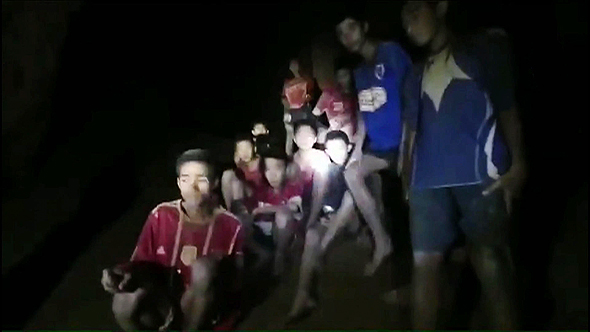 Kids stranded inside a cave in Thailand. Photo: AFP
Ashkenazi, a vendor of military grade mesh handheld radio devices by Israeli manufacturer Maxtech Networks Ltd. and other technologies, collaborated with Maxtech to provide the Thai navy with 17 radio devices, dispatching a team to help rescuers set up the radio network inside the cave. The idea was to start connecting the devices to facilitate searches and hopefully overcome difficulties and create near real-time communications, Ashkenazi said.
Related stories:
Uzi Hanuni, founder and CEO of Maxtech, told Calcalist on Tuesday that the rescuers tried different means of communication inside the cave to no avail. Using Maxtech’s handheld devices that function as relays, and cables to connect devices through underwater paths, rescue forces were able to communicate messages over the labyrinthine caves, he said. Extension of the communication line is far from being complete, and the deployment of physical cables is tough due to narrow underwater passageways barely wide enough to allow a person through. The divers, already carrying oxygen tanks, cannot carry the radio cable as well, he said. On Tuesday, media outlets worldwide reported that a team of rescuers and medical professionals had reached the boys, who have now received drinking water, food, and medical attention. Thai officials said that a rescue would not be attempted until the group regains strength. Rescuers say the only way out of the cave involves diving through a flooded narrow cave system stretching several miles.
Cancel Send
To all comments