Asus to Expand Manufacturing in Indonesia and Brazil, Executive Says

The company is also scouting for collaboration, investments, and acquisitions in Israel, Benjamin Yeh, Asus director for Europe, Middle East, Africa and Asia Pacific said in an interview

TAGS:
Taiwanese multinational AsusTek Computer Inc. is currently expanding its manufacturing facilities in Indonesia and Brazil to answer global demand, according to Benjamin Yeh, Asus director for Europe, Middle East, Africa and Asia Pacific. The company is also scouting for collaboration, investments, and acquisitions in Israel, Yeh said in an August interview Calcalist while visiting Israel.

Taipei-headquartered Asus was the first one to come out with a netbook, in 2007; with the padfone, a smartphone with tablet and keyboard docks; and was also one of the first to launch hybrid computers and dedicated gaming computers. 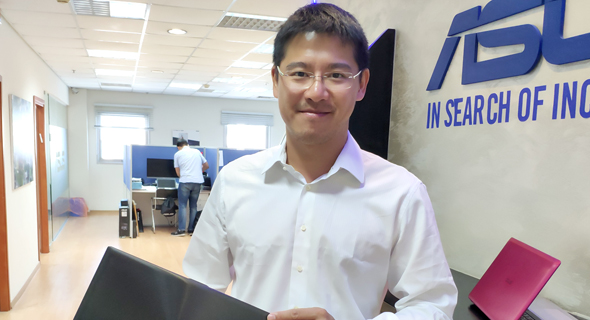 Benjamin Yeh. Photo: Nitsan Saddan
The company reported revenues of around $14.13 billion for the fiscal year 2017, a 7% decrease year-over-year, which Asus attributed mainly to increasing competition in the industry. Yeh declined to comment on Asus' market share in the mobile industry. Asus focuses on consumer products. Unlike Lenovo, HP, and Dell, which get much of their revenues from the business sector, Asus does not offer many enterprise-oriented products, excluding its ASUSPRO series, which is available only in select markets.
Related stories:

Gaming products became a major growth engine for the company in recent years, Yeh said, The company launched the first of its ROG (Republic of Gamers) line in 2013 and has since organized or sponsored many eSports competitions. In May 2017 the company unveiled ROG Zephyrus, at the time the thinnest and most powerful gaming laptop on the market, even though thinner laptops have been introduced since.

The current trend in the laptop market, according to Yeh, is laptops with a thin bezel reminiscent of smartphones. But in the near future users may see laptops with built-in cellular connections, and integrated sensors. Asus revealed a laptop with a smartphone-sized touchscreen instead of a touchpad at the Computex 2018 show.
Cancel Send
To all comments