Back to Back to the Future II

Today marks the 29th anniversary of the worldwide release of Back to the Future II. As such, it is worth considering where the movie got it right, and where it got it wrong, in predicting the future

Today marks the 29th anniversary of the worldwide release of Back to the Future II. The relevance of this and similar films in the promotion and development of technology, or as a touchstone for discussing complex technological innovation, is apparent. As such, it is worth considering where the movie got it right, and where it got it wrong, in predicting the future. Perhaps this knowledge can be applied to help those in government seeking to regulate new and emerging technologies.

It’s clear that the screenwriters were extremely creative in predicting and developing a future 2015 (now the past) and they, like many of their predecessor futurists, got a couple of things right. Even those things that they might otherwise not have gotten right, there have been efforts to push technology forward specifically to achieve the vision of the film. For example, there has been substantial time and manpower devoted to creating the otherwise less than practical hoverboards or self-tying Nikes. This particular power of science fiction to push innovation forward even when it may not yet seem practical or necessary, ought not to be discounted. This vision should be incorporated somehow into the regulatory process.

Additionally, there are some areas of technological innovation where parallel technologies have achieved some form of the future predicted in the film, albeit stylistically different. Consider one of the most iconic parts of the Back to Future trilogy: the flying DeLorean. A future of flying cars is not unique to this movie; in fact it is one of the most consistent tropes of science fiction. The benefits of such a future are obvious: no traffic jams. Flying cars exist but seem to be constantly on the cusp of being introduced broadly. Like most hybrid mashups, they aren’t particularly good at driving and they aren’t particularly good at flying, at least for now. However, with the advent of innovative drone technology, and increasingly powerful artificial intelligence to surmount the obvious safety considerations —for example, those associated with giving everyone the right to operate their car in three dimensions and avoiding the licensing and liability nightmares associated with Jetson-style flying cars— we may soon see safe, efficient, and legal autonomous drones ferrying people above the traffic below.

Another area where the screenwriters got some of it right, is the pervasive use of biometrics. In the movie we see fingerprints being broadly employed, from the instantaneous police identification, to access to homes, to paying for taxi rides. While we do use our fingerprints for instantaneous identification, for example, in gaining access to Disneyworld, we are also likely to use other biometric technologies like face, iris or voice scans to confirm our identity. Also, while many may use thumbprints to access their smartphones, it’s usually those smartphones that actually mediate usability of biometrics by using, for example the phone to open doors, bank online, or to pay for items. Their popularity and pervasiveness notwithstanding, there remain many legal and ethical problems with biometrics including privacy violations associated with collecting and safeguarding this information; keep in mind that unlike a stolen password that can be changed, your biometric information is inherently unalterable, once that information has been compromised there is little you can do. Further, in some jurisdictions, the police can acquire your fingerprints involuntarily to access a phone that is biometrically locked. 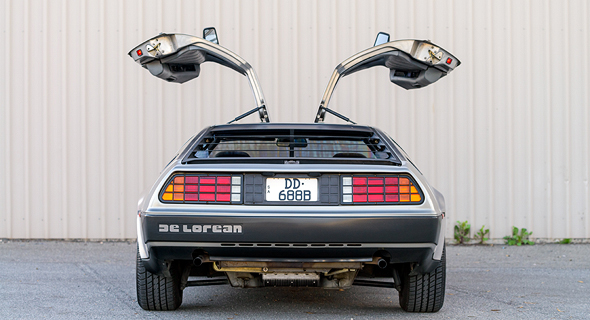 Back to the future style car. Photo: Shutterstock

There are two glaring areas where the movie got things very wrong. The first is the fax machine. In the 2015 of Back to the Future, fax machines are pervasive and are a common source of communication. Although many see this as a major oversight by the film, in some countries fax machines are still widely used. The movie also failed to predict the pervasiveness of smartphones. Even in the late eighties, cell phones had already become part of popular culture, yet the movie’s very capable writers failed to foresee the centrality of internet-connected smart devices in the pockets of nearly everyone in society.

Popular culture can be forgiven for failing to see the confluence of many diverse and distinct technologies and social trends that made smartphones so pervasive today – Apple was trading at a hundredth of its current valuation when the movie came out. Nevertheless, there are real and relevant take-home lessons for those who purposely aim to predict the future for promulgating regulations in the emerging technology sphere.

Regulators, like the film, have to be able to predict with some accuracy the evolution of the technology they are aiming to portray and have to be astute enough to account for societal paradigm shifts that might upend much of what we take for granted. When attained by filmmakers, accuracy in predictions possibly translates into the timelessness of the work created. For regulators, success means they’ll be able to create regulation that will not quickly become outdated or a hindrance to innovation.