The video for the song called “Bassa Sababa”—a combination of two Hebrew-Arabic slang words translated as “bummer” and “that’s cool,” respectively—portrays Barzilai as a bride, who, after being left at the altar, chases her groom around a video game-like city, threatening to ram him with a horn attached to her forehead. She later turns into a pink rhino to complete the chase. 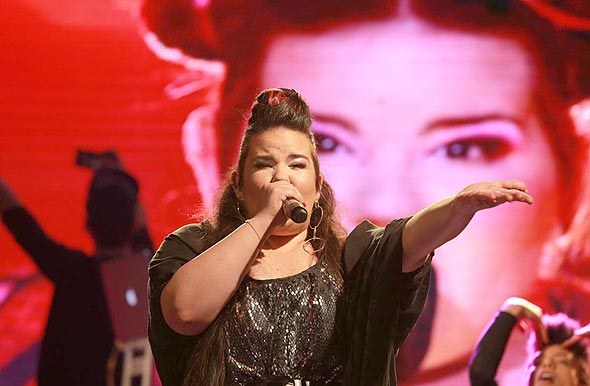 Netta Barzilai. Photo: Orel Cohen
“Bassa Sababa” is the first song released by Barzilai since she took home the trophy at the Eurovision international song contest held in Lisbon in May with her hit “Toy.” In July, Universal Music Group threatened to sue the creators of “Toy,” claiming it plagiarises the song “Seven Nation Army” by the White Stripes. The suit was later settled outside of court, according to an August report by Israeli news website Ynet.

Thanks to Barzilai’s win, Israel was chosen to host the 2019 Eurovision contest for the fourth time. The event will take place in May Tel Aviv and is expected to draw some 20,000 tourists. In January, Tel Aviv posted a tender for setting up a large scale camping site at its northern Yarkon Park to house some 2,000 people for a period of about 6 weeks which includes the Eurovision and the Gay Pride events scheduled for June in the city.