After looking at over 16,000 twitter accounts of registered U.S. voters, newly published research concluded that 80% of 2016 election-related fake news tweets originated with only 0.1% of the users, and read by only 1%

TAGS:
The discourse around the 2016 U.S. elections gave rise to the phrase "fake news," which is now being used globally with increasing frequency to reject unwanted information, credible or not. Social media platforms have become a main target for criticism for their role in the distribution of fake news. But according to a new study published in January by peer-reviewed journal Science, only around 5% of political content published by Americans on Twitter fell into the definition of fake news. What's more, around 1% of users consumed 80% of the fake content, and only 0.1% of people were responsible for this 80%.

The research was led by Nir Grinberg, a postdoc and research fellow at the Harvard Institute for Quantitative Social Science, and colleagues. The researchers studied tweets sent between August and December 2016 by 16,442 accounts of registered American voters, and cross-referenced them with a few hundred websites classified by both the researchers and independent fact-checkers as generators of fake news. 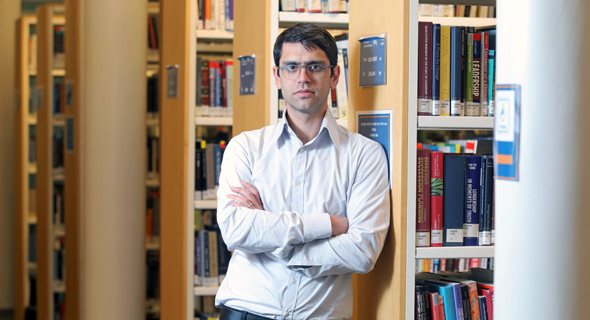 Nir Grinberg. Photo: Dana Kopel
The research refutes a popular claim that "fake news" is more popular than "real news,” Grinberg said in an interview with Calcalist in January. The 5% of circulated news defined by the researchers as fake were incredibly centralized, 80% of the fake news tweets originated with only 0.1% of the users—only 16 accounts. Twelve of those 16, incidentally, were female users. As the researchers used public databases of registered voters, they could determine with certainty that the accounts involved weren't operated by bots. These 16 users had additional profiles on other networks like LinkedIn and Facebook that were fairly consistent across the board, Grinberg said, and they had normative professions outside of social media. They did not have much in common beyond knowledge of how to use the platform effectively, he explained, and they were not doing anything that violated terms of use but rather smartly leveraged the lax rules to push content. The consensus in the academic community today is that the aforementioned 1% of users exposed to this content did not impact the 2016 U.S. election results, Grinberg said. Conservative voters consumed much more fake news, according to the research. "If you look at 99% of the population, separated to left and right, we can see that less than 3% of left-wing voters consumed a significant amount of content from fake news sources," Grinberg said. "In the right, meanwhile, one in seven consumed a significant amount of such content." 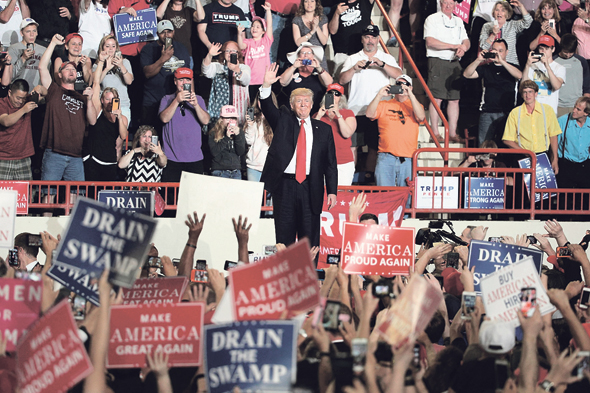 Donald Trump campaigning. Photo: AFP
Less than 5% of left and center users shared fake content, according to the research, compared to 11% of right-wing users and 21% of those on the far right. One thing to remember is that the researchers examined data related to one specific election campaign, and things could look very different during the next elections, Grinberg said. Another correlation the researchers discovered related to age. "Older people consume more fake news, regardless of political leaning," Grinberg said. Older people were also more likely to share fake content. A recent study by researchers at New York and Princeton Universities that examined election-related fake news on Facebook reached similar conclusions.  While the research found that fake news is not overall more popular than "real news," Grinberg said, the findings do raise basic questions regarding the freedom of speech and the way a minority of people can employ the lax rules of such platforms to attempt and influence public opinion. "The fact that we are actually talking about fake news shows that it is working, to some extent."

The pragmatic limitations that can be realistically imposed on political discourse on such platforms need to be discussed, Grinberg said, adding that he doesn't think there is an absolute answer. "There exist today technologies that weren't available when the principles of free speech were laid out, and we need to consider how to balance them against other, no less important principles.”

Related stories:
In the article, Grinberg and his colleagues give an example for a potential policy Twitter can employ: limiting the number of political tweets. "We're not actually recommending it, it's very one-dimensional," he clarified. "But let's assume there was a 20 tweets a day limit. It would've impacted less than 1% of users, but the amount of fake news would have decreased by 30%." People are capable of critical thought, Grinberg concludes, but the social media companies can do more. "The research shows that a very limited number of sources are responsible for fake content. If the platforms enabled users to get a better context for the source of the content, and for how fact-checkers rated it before, than as content consumers, we could deal with the phenomenon more easily."
Cancel Send
To all comments
Buzz