As the Passover holiday draws near, many Israelis are joining in annual spring cleaning rituals, with smart cleaning devices shouldering more of the load

TAGS:
As the Passover holiday draws near, many Israelis—both secular and religious—are joining in annual spring cleaning rituals, which in Israel, inexplicably also includes window washing.

Like other areas of consumer technology, cleaning technologies have boomed in the past couple of years, with engineers and roboticist introducing technologies that seem as if they evolved from the Jetsons’ beloved robo-maid, Rosie. Indeed, many of those working in this space today—including the CEO of iRobot, the maker of the ubiquitous Roomba vacuum cleaner—grew up expecting a smart-talking humanoid robot maids that would make housekeeping chores effortless. 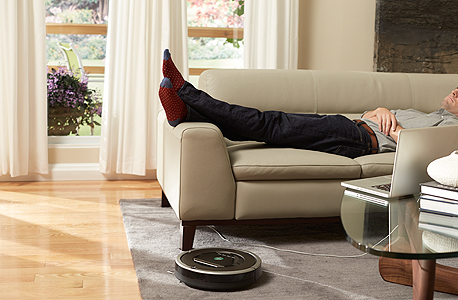 Roomba. Photo: PR
While we have yet to see a real-life Rosie in action, there are several interesting and useful cleaning technologies that Israelis might consider employing as they prepare for the holiday.

Still the paradigmatic device of cleaning technology, the Roomba is a self-propelled robot vacuum cleaner that cleans your house autonomously. Since it was introduced in 2002, this futuristic device—and all of its incarnations and iterations—have been cleaning homes, roof gutters, pools, and yards via sensors and mapping algorithms. Roombas are also very hackable, allowing DIYers to modify their devices to work with other devices such as the Xbox Kinect, or to pursue non-vacuum related projects.

All of their promises of clean homes notwithstanding, in 2017, the New York Times and other news outlets began reporting on the growing concern that Roombas were collecting spatial and mapping data from homes and selling them to the highest bidder. Some feared that after a Roomba cleaned their living room they might start seeing targeted internet ads for sofas, or other targeted ads prompted by new found data on to their presumed socioeconomic status, such as the size of their home. While Roomba acknowledged that they were collecting this data, they promised they were not selling it. This was not the last time these little robots have been in the news: more recently, Roombas have also been suspected of robbery.

Pervasive vacuuming robots are not the only internet-enabled smart cleaning devices. Internet-enabled air purifiers claim to track particulates in your home and devise data-driven purification strategies, but they could potentially report back to other interested parties. Consider having your recreational habits—smoking for example—tracked by your trusted air purifier. In another scenario, these purifiers could be hacked and their datastreams intercepted and viewed by unintended recipients.

Wifi-enabled smart litterboxes may narc on you to the landlord of your ostensibly pet-free building. Even internet-enabled trash cans could let third-parties know how much trash you are using. Your trash production, or lack thereof, could signify to interested parties that you are out of town, as well as advertise that you an unreported sublet in your studio apartment.

Considering the amount of consumer data that could be potentially collected by these devices—whether by design or by malicious hackers—consumer might fear that they are under constant surveillance by their smart cleaning devices. To protect consumers, California passed an Internet of Things (IoT) cybersecurity law late last year. The law, which comes into effect January 2020, requires that all IoT devices sold or manufactured in California include “reasonable” security and authentication systems to protect consumer data. The law is far from perfect. Critics called out the vague wording and said that the bill lacks a private right of action and responsibility by manufacturers of internet-enabled devices for poor security choices made by the consumer. Still, this first-in-the-nation law is nevertheless an effort in the right direction to help protect the privacy of consumers including those that use internet-enabled cleaning devices. Last month the U.S. Senate introduced a similar bill that would require that all IoT devices in government agencies also adhere to standards similar to those set up by California. In lieu of set laws, many U.S. government agencies have stepped up to provide guidance documents.

Smart cleaning devices may fall under both the purview of the Federal Trade Commission (FTC) as well as the Food and Drug Agency, depending on the nature of the technology.

In Canada, IoT devices might fall under the Personal Information Protection and Electronic Documents Act (PIPEDA) provided that the data collected by these devices can be legally deemed to be personal or private. It remains to be seen whether the size of one’s living room or the level of particulates in one’s apartment is deemed personal or private. Although Canada is a global leader in the area of privacy law, there still remains a huge gap in implementation by manufacturers, particularly as crowdfunded devices and other freshmen products by new companies come online. To wit, in Canada, it has been shown that approximately 70% of IoT devices have vulnerabilities that could be exploited, including a failure to require strong passwords, lack of encryption, and insecure web interfaces. Of course, there are other concerns associated with these devices beyond either hacking or surveillance. As consumers increasingly come to rely on such devices there are other social considerations, such as the loss of cleaning skills, akin to how reliance on Waze has caused us to forget our map-reading skills. Additionally, given how many cleaning jobs are taken by those of lower socioeconomic status, or by vulnerable minorities, there is a possibility that they will begin to lose their jobs to this technology.

So buy some innovative clean technologies this Passover, even robot window washers, just remember that until the laws become more protective of consumers, technology savvy rabbis might be hacking into your devices to see whether you have really gotten rid of all of your chametz.