MyPart develops an artificial intelligence-based service that sifts through thousands of data points in a given song, such as chords, lyrical topics, and cultural elements, sorting through songs in a pace that due to sheer volume would otherwise be impossible to achieve. The company’s service prioritizes the songs by relevance according to what an artist or a record label is looking for. The startup then lets artists offer their original songs, lyrics, music, translations, and visual art to musicians of their choice. 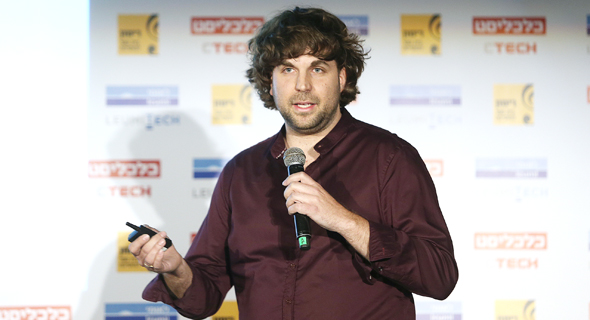 Matan Kollnescher. Photo: Orel Cohen
According to Kollnescher, the company’s service can predict the likelihood that a given song can match a songwriter to musicians or products in the industry, and can thus enable songwriters to connect with others in the music industry on a global scale. The company's platform also acts as a crowdsourcing medium for video, graphics, and lyrics, allowing visual artists to privately offer and produce content to be used by famous artists. The company’s next steps are to provide artists with feedback about how to fit the requirements of their desired artists better, Kollnescher said.
Related stories:
The company is supported by music industry executives such as former President of Interscope Music Ronny Vance, and Israeli pop star and entrepreneur Ivri Lider, who holds a major stake in the company. Grammy-winning songwriter Evan “Kidd” Bogart, who wrote Beyoncé’s hit “Halo” as well as songs for Jennifer Lopez, Rihanna, and Madonna, is the company’s head of business development. Founded in 2016, MyPart has raised $1.3 million to date, according to Kollnescher.
Cancel Send
To all comments