When ET Calls, Who Should Pick Up the Phone?

TAGS:
Last month, the U.S. Navy disclosed that its pilots reported multiple encounters with Unidentified Flying Objects (UFOs) in 2014 and 2015. U.S. governments seem to be taking these encounters seriously and the Navy has now developed reporting guidelines for UFOs.

While the UFOs spotted by the Navy are unlikely extraterrestrial in origin, the U.S. government has long tacitly acknowledged the possibility of advanced extraterrestrial life. Although the infamous Area 51 and its notorious "weather balloons" are likely associated with bleeding edge avionics rather than aliens per se, the government does have unclassified efforts associated with the search for simple and advanced extra-terrestrial life. For example, the Pioneer space probes 10 and 11—sent out by NASA in the early 1970s to explore the far reaches of the solar system—had small metal plaques affixed to them identifying their human origin and providing a bit of background information regarding Earth and humankind, just in case an advanced life form stumbled across them. Pioneer 10 has since been lost, but Pioneer 11 is still hurtling at 11 kilometers-per-second toward the constellation Scutum. 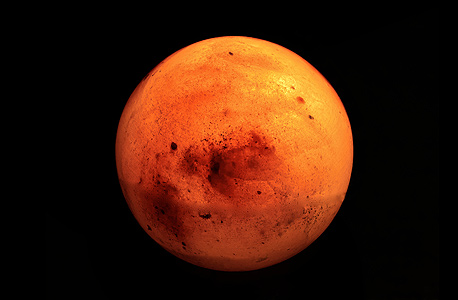 Mars, the only planet inhabited solely by robots. Photo: Shutterstock

In later exploration efforts, NASA added the golden Voyager Interstellar Records to the twin Voyager probes. Imprinted with explanatory images and containing sounds designed to inform extra-terrestrials about Earth, these records provide information about us to alien races. While both Voyager 1 and 2 have left the solar system and entered interstellar space, there is yet no indication that they have encountered any other life. And, Mars, the only planet in our solar system inhabited solely by robots (as far as we know), is teeming with technology seeking out evidence of current or past microbial life.

Having grown up on a healthy diet of Hollywood science fiction, many of us wonder why we have not yet met an extraterrestrial (ET). In fact, some of the brightest minds of the past century have wondered the same. Nobel Prize laureate Enrico Fermi, the acknowledged architect of the nuclear age, famously questioned why, with all the hundreds of billions of stars just in our own galaxy, we have yet to see any evidence of advanced civilization on any other Earth-like planets. There are many scientific theories resolving the Fermi Paradox, many even allowing for the possibility of advanced alien life.

However, the more pressing legal questions relate not to whether there are aliens, but to how to communicate with them, keeping in mind that such communication represents all of mankind. One of the most famous efforts to reach out to neighbors in our galaxy occurred in 1974 via the Arecibo Observatory radio telescope in Puerto Rico. At 305 meters wide, Arecibo was the largest telescope on the planet for more than 50 years. Composed by two of the greatest astrophysicists of the last century, Frank Drake and Carl Sagan, the Arecibo Message was a signal that encoded a simple image, similar in content to the one affixed to Voyager. Notably,

Arecibo is not the only source of outgoing messages from Earth. Both popular tortilla chips brand Doritos and online classified site Craigslist have sent their own (commercial) messages into the ether.

Although the scientists at Arecibo are now, in honor of the 45th anniversary of their original message, polling children to devise an improved universal message, not everyone thinks that reaching out to aliens is a prudent idea. Stephen Hawking famously suggested that an alien interaction with the human race would likely mirror Columbus’s arrival to the new world, which is to say, that it will likely not turn out well for the natives. In fact, there is a robust anti-messaging crowd whose members include tech leaders like David Brin and Elon Musk and popular scientists like Jared Diamond and Neil DeGrasse Tyson.

Not everyone thinks that a directed message to aliens would invite terror and destruction. In any case, even if no intentional contact is made, Earth has been leaking television and radio signals for at least a century, effectively beaming out the worst of humanity to the rest of the universe in an ever-expanding radius at an unrelenting rate of one light year per year. These signals can never be recalled.

While you and I might poke fun of the idea of meeting little green men, our governments, militaries and scientific institutions invest billions in the search for extra-terrestrial life. Most recently, in 2015, entrepreneur Russian-Israeli billionaire Yuri Milner announced a $100 million investment in the Search for Extraterrestrial Intelligence (SETI) program.

Yet, even with all of the money and efforts put into conversing with ETs, surprisingly (or not), there is not much law in this area. While we cannot control what seepages off Earth from our various entertainment sources, the law might want to have a say in who, what, when, and where we intentionally contact. Similarly, the law might want to determine who should respond to any attempt by aliens to contact us, and how.

To wit, in the 1980s, a set of protocols was drawn up with the intention to inform scientists as to how to respond to alien contact. Those protocols were revised a decade later by the International Academy of Astronautics, a 1,200-member society which was initially led by Theodore von Kármán and endorsed by many other relevant non-governmental organizations. Although those revised protocols were submitted to the United Nations, it does not seem as if they have become official, notwithstanding well-publicized rumors to the contrary.

The submitted Deceleration of Principles Concerning Activities Following the Detection of Extraterrestrial Intelligence is but one version of potential post-detection protocols that could be drawn up. There are many non-trivial considerations that should be taken into account: should a representative scientific body draw up the protocols or a political body?; Should every potential distinct group have the right to respond or should humankind respond with one voice?; Should there be a generic response ready to go, or should we create a message that responds directly to a message received? What should be the process of formulating said response?; Should we control all of our outgoing messages or just our responses? It is important to keep in mind that whoever communicates with life outside of Earth will be speaking on behalf of our entire race and you only get one chance to make a first impression.