Suicide Is a Tendency, Not a Destiny, Says Suicide Researcher

Danuta Wasserman, who is a professor of psychiatry and suicidology at Swedish medical university Karolinska Institute and the founder and head of the national Swedish suicide research and prevention center, spoke to Calcalist during a recent visit to Israel

TAGS:
When she was an undergraduate student, one of Danuta Wasserman’s closest friends committed suicide. Searching for an answer as to why a “talented, beautiful woman who was loved by everyone,” would do such a thing, Wasserman became fascinated with the field of suicidology, the study of suicide. Wasserman—who is a professor of psychiatry and suicidology at Solna, Sweden-based medical university Karolinska Institute and the founder and head of the National Swedish & Stockholm Centre for Suicide Research & Prevention of Mental Ill-Health (NASP)—spoke to Calcalist during a recent visit to Israel. Wasserman visited the country to attend a conference held by Levinsky College of Education, Israel’s Ministry of Education, Bar Ilan University, and the Interdisciplinary Center Herzliya (IDC). 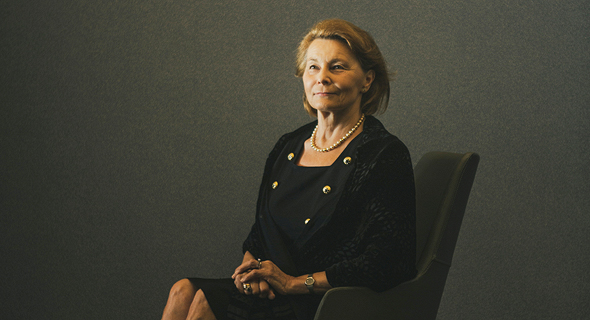 Danuta Wasserman. Photo: Tommy Harpaz
According to Wasserman, suicidal tendencies can be genetic in nature. Research shows that between 30% and 55% of suicidal tendencies can be traced back to genetically transferred traits, she said. Certain hereditary psychiatric syndromes, such as schizophrenia, also raise the risk of suicidal behavior, as do some biological processes that are controlled by genetic makeup, she explained. The group of researchers led by Wasserman is currently focused on examining the hypothalamic-pituitary-adrenal (HPA) axis, a system that controls the reaction to stress in humans through the release of hormones such as adrenaline and cortisol. One of the genes related to the processing of stress is also related to suicidal behavior, Wasserman said. In her research, she found that men tend to react more drastically to stress so that very minor stress levels could drive them to suicide. According to a study published in 2018 by Israel’s Ministry of Health, about 80% of all people that committed suicide in the country between 1999 and 2015 were male. According to Wasserman, the numbers are similar anywhere you look—there are more cases of men successfully committing suicide, but women attempt suicide more often.

But it is not just about genetics, Wasserman said. In women, a suicide attempt is often a call for help and getting the help they need tips the scale, which indicates that the environment and outside treatment could help prevent suicide, she explained. Since they are more prone to suicide, Wasserman’s studies show that men require more help and support in dealing with stress due to their genetic makeup.

In the future, genetic research could help adjust treatment according to the patient's unique makeup, Wasserman said, adding that it could only work in combination with psychological treatment.

Suicide is not a destiny, it is a tendency that affects a person’s personality, their aspiration, and the way they view the world, Wasserman said. The other half of the story is still the interaction between that person’s genetics and their environment, she added, explaining that people could do a lot more for those that are suicidal, if only they were better educated on the subject.

Suicide and other mental health issues are still taboo, Wasserman said, adding she finds it vital to teach the subject in school in order to help students be more aware of the dangers and signs. Kids learn about stress, cancer, and other diseases in school, they can also learn about mental health, as a way to normalize the discourse, she said. Asked if such a discussion might not encourage kids to act on their suicidal urges, Wasserman said she believed a dialogue and open discussions could help such children and the people close to them find more constructive solutions.
Related stories:
The media should use celebrity suicides as an opportunity, not to divulge private sensational details, but to start a conversation on the causes that brought that person to end their lives and especially on ways through which the incident could have been avoided.

A study her team conducted in collaboration with the World Health Organization on patients around the world showed that doing post-treatment follow-ups could decrease the number of suicides by up to 90%. The study ran for 24 months but, according to Wasserman, the first year is the most critical. The follow-ups can be made in meetings or even over the phone by interns or students, providing a sense that somebody cares, she said.

Suicidal thoughts do not normally vanish into thin air, but you do not have to live with them all of the time, either, she said. These thoughts come and go and it is important for patients to be aware of them and remember that they have faced them and prevailed in the past, she added.
Cancel Send
To all comments