After four decades with no new bank in Israel, the digital banking venture of two of Israel’s leading entrepreneurs is expected to be licensed

The digital banking venture of Marius Nacht, co-founder of Check Point Software Technologies Ltd., and Amnon Shashua, the co-founder and CEO of automotive chipmaker Mobileye, has successfully passed the tests of the Bank of Israel's banking supervision division. It is now expected to receive a bank license, according to a Tuesday announcement by bank governor Amir Yaron and Israeli banking regulator Hedva Ber.

The establishment of a new Israeli bank for the first time in four decades, especially a digital one, can change the local banking system from top to bottom. While Israeli banks have started adapting to the digital revolution by digitizing various services, with a particular focus on payment apps, a digital-only bank will be a different thing altogether. 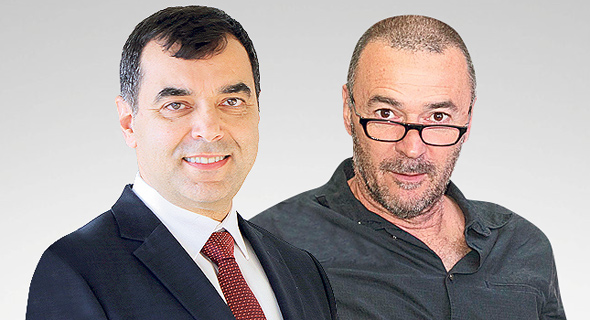 Amnon Shashua (left), Marius Nacht. Photo: Orel Cohen
According to the plan Nacht and Shashua presented, the bank will have no brick and mortar branches, and will focus on banking services for households such as credit lines, deposits, checking account management, and securities brokerage. The tests conducted by the Bank of Israel pertained to the integrity and financial strength of both entrepreneurs, and to the required regulatory preparedness. The banking supervision division stated the approval was made possible following a reform intended to increase competitiveness in the Israeli banking and finance sector. The new bank will be based on computing systems manufactured by Mumbai-headquartered Tata Consultancy Services Ltd. of the TATA Group. Similar to Israel’s other banks, it will be under the supervision of the banking supervision division, and will have access to the Bank of Israel’s various tools and payment systems. Ber stated that the banking supervision division will closely support the venture going forward, as it did for the past year, and will do the same for other entrepreneurs looking to set up new banks. Nacht and Shashua stated that while they are proud of receiving the license, the venture is still in its initial stages and still has a long way to go.
Cancel Send
To all comments