As Online Services Age, Your Memories May Fade With Them

Whether or not our data is lost due to the unrelenting march of progress, as consumers, we ought to think carefully about how we store our irreplaceable information

TAGS:
Last month, it was reported that the U.S. Department of Defense (DOD) quietly ended the use of 8-inch floppy disks this past year. Astoundingly, these disks were, until recently, used by the DOD in the computers that coordinate U.S. nuclear forces via a coded emergency action message system (EAMS).

One of the reasons that the military chose to finally stop using these archaic 1.2-megabyte floppy disks is that, while still surprisingly widely in use in other old and expensive devices in various industries, they are unsurprisingly no longer being manufactured. 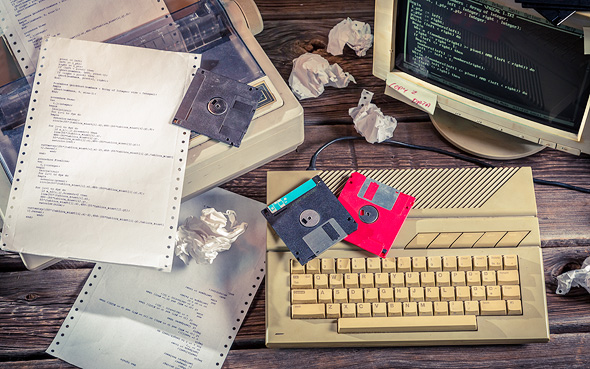 Similarly, until recently, much of the New York City Subway system was running on antiquated technology from the 1930s to the consternation of many straphangers who would never know if or when the next train would be arriving.

But it is not only immeasurably huge bureaucracies that are too unwieldy to keep up to date with changing technologies. Many airlines still employ impact dot matrix printers for printing, among other things, manifests at departure gates. Frequent flyers are especially accustomed to hearing the iconic sounds of the print-head moving across the correspondingly ancient tractor-feed during the boarding process.

Computer hardware are not the only antiquated technologies being used in sensitive industries, and even long-gone computing languages are still in use. During the Y2K crisis leading up to the new millennium, coders that could code in archaic and esoteric coding languages that were broadly employed in legacy machinery were in high demand.

Perhaps, closer to home, many households also rely on outdated technologies to store their data. While the last video cassette recorder (VCR) was manufactured in 2016, millions of consumers around the world still have aging and eventually inaccessible video cassette libraries, some containing irreplaceable home videos.

The problem with obsolescent data storage is not just VHS tapes and floppy disks. The Museum of Obsolete Media, a private online initiative by a U.K. resident, collects and catalogs over 600 obsolete forms of physical media that might nevertheless still be employed somewhere to hold important information.

These examples highlight an ongoing concern in our constantly advancing digital society, as these archaic systems are becoming an increasing burden and expense on industry and government due to downtime from crashes, lack of replacement parts, limitations on productivity and usefulness, security concerns, and legal liability due to all of these and other considerations.

And while corporations and government offices that cling to legacy equipment and software may be costly for consumers and citizens, the alternative also creates copious consternation. Perhaps even worse than having to rely on ancient systems to run important functions, customers also suffer when companies constantly upgrade and update their old technologies in favor of progress. Parsimonious iPhone users experience this every time Apple announces that it will no longer provide operating system updates for older devices.

A similar phenomenon occurs when websites that store our data become inaccessible or shut down. This type of data loss goes against conventional wisdom: we are constantly told that the internet does not forget and we should be wary of posting that picture online as it may come back to bite us. But it is not necessarily accurate, as the internet forgets all the time, especially when sites die, and these memory losses are costly for the public, particularly in terms of lost productivity, lost resources, and even opportunity costs associated with learning and optimizing interactions with a website or online service only to see it fail years later, requiring you to learn and optimize your use of its replacement.

In one extreme example, when the U.S. Justice Department raided German-Finnish entrepreneur Kim Dotcom’s compound in 2012 and shut down his exceedingly popular file-sharing site Megaupload, links to petabytes of files broke and all of that data became inaccessible. Eventually, much of these files stored on Megaupload's servers were deleted. Ironically, while Megaupload did host innumerable pirated files, the U.S. government also used the service for legitimate cloud storage purposes, Dotcom (born Schmitz) claimed at the time.

But less controversial sites and services are also shut down, some with notice, some without. Consider the popular photo-sharing site Kodak Gallery that shut down in 2012, or the lesser-known Facebook Moments app that was decommissioned earlier this year.

Another example is Yahoo Groups, a popular group mailing platform for digital communities that has been around since 2001, hosting over 10 million groups and all of their archived content. Yahoo now intends to migrate parts of the service to its new email system, requiring groups to download their content before the end of the year, to save it, or risk losing it all.

Fortunately, many websites and services that shut down give their users some warning and provide opportunities to access files in bulk before the services go dark. Even those sites that had not been as helpful in the past, depending on their jurisdiction, are now obligated, by the European General Data Protection Regulation (GDPR) to provide such services. Under the GDPR, users have the right to port their data at their convenience to a local computer or even to a competing site.

However, in some instances this still might not be helpful: if the site shuts down unexpectedly or is hacked, you may not know or have sufficient notice to save your irreplaceable digital files. Even when you can retrieve your files, you may find that the way you organized and optimized your files for the specific site is not transferred or is inapplicable for another service. This means your efforts will have to be replicated, once you identify an alternative site. This happened to many users of the popular Google Reader RSS service who lost their complicate file structures when the site eventually shut down in 2013 and they had to migrate to an alternative site.

No site is immune to the possibility of losing your important pictures and files. Google regularly deletes its own apps, perhaps most spectacularly, its failed social media network Google Plus.

Legislation-wise, there isn’t much more than what the GDPR already mandates that can be done to save your precious online data if a site fails, closes, or otherwise loses your stuff. Perhaps though, governments ought to consider treating at least some sites as “too big to fail,” akin to banks and automobile manufacturers during the 2008 Great Recession that were propped up financially by government funds. Alternatively, governments may want to treat some of the most popular sites as public utilities with all their concomitant rights and obligations vis-à-vis the public.

Whether or not our data is lost due to inaccessible technology and the unrelenting march of progress, as consumers we ought to think carefully about how we store our irreplaceable information. You may consider even digging out those old floppy disks and transferring all of those files to what remains one of the most robust data archiving systems: paper.