On Sunday, Fattal announced it has acquired the building that once housed the Palatin Hotel, Tel Aviv’s first luxury hotel, erected in 1926

Israeli hotel chain Fattal Hotels Ltd. aims to restore Tel Aviv’s first luxury hotel to its former glory. On Sunday, the company announced it was setting up an ultra-luxury hotel in the iconically pink building in central Tel Aviv that once housed the Palatin Hotel.

Fattal acquired the historic building on the corner of Ahad Ha'am St. and Nachalat Binyamin St. and will invest NIS 150 million (approximately $43.4 million) in renovating the building and intends to launch the new hotel late this year, under a separate brand. 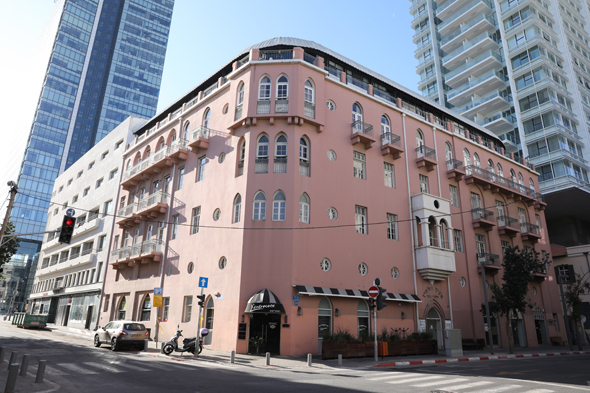 Fattal recently launched another boutique hotel in nearby landmark building Bachar House, also on Nachalat Binyamin St. Fattal, however, did not acquire this property and has instead leased it for a 25-year period.

Fattal, a subsidiary of Tel Aviv-listed Fattal Holdings (1998) Ltd., operates 42 hotels in Israel—10 of them in Tel Aviv—and 213 hotels in Europe. The company has previously announced plans for two additional boutique hotels in central Tel Aviv, both scheduled for launch in 2021—one on Lilienblum St., bordering the city’s picturesque Neve Tzedek neighborhood and another at the former Kabbalah Centre, adjacent to Dizengoff Square.

The Palatin Hotel was first erected in 1926 as Tel Aviv’s first luxury hotel, complete with wood flooring, a concert hall, a ballroom, and one of the city’s first elevators.

The local hospitality industry suffered a significant blow during the Arab revolt in Palestine between 1936 and 1939 and the Palatin Hotel was shut down in 1938. In 1942, it resumed operation as a guest house for allied soldiers during the Second World War. Following the foundation of Israel later in the decade, the building was converted to house offices.