Lampposts light up the night sky, making urban environments safer and helping us find our way after dark, but the people behind Israeli startup ACiiST Smart Networks Ltd. think Lampposts could, and should do much more. The team behind ACiiST wants street lights to enlighten cities with data on the vehicles and individuals traveling down streets and roads. By placing their little black boxes on existing lampposts, ACiiST can turn them into a smart, connected, data-gathering network.

ACiiST’s black boxes, roughly the size of two iPhones and easily attached to existing lampposts, contain hardware and software that can be used to connect with cameras, closed-circuit television, sensors, and wifi, Yoram Shacham, ACiiST co-founder and vice president of systems and software development said in a Monday interview with Calcalist. ACiiST’s black boxes serve to transmit data collected from the various devices to municipalities and law enforcement agencies. 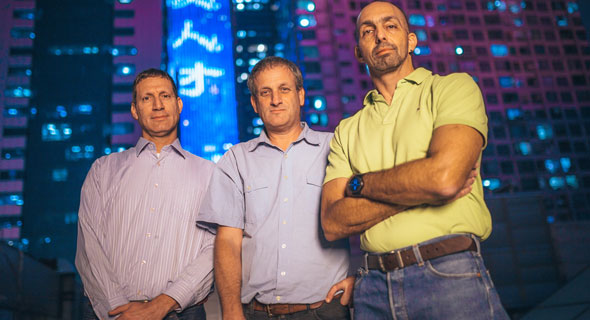 ACiiST co-founders. Photo: Vitaly Vyazovsky
Usually, establishing a communications infrastructure in an urban environment requires new structures, as well as digging and trenching, which affect traffic and impact residents’ quality of life. ACiiST minimizes the disturbances to the nearby population by connecting to existing infrastructure, and as such are also more cost-efficient than existing systems, Shacham said. The company’s technology was rolled out last month on Israel’s Highway 20, also known as Ayalon Highway, near the central Israeli town Rishon LeZion. ACiiST’s technology is also in use in the coastal Israeli town Herzilya, Shacham said. ACiiST was founded in 2016, and has raised several hundreds of thousands of dollars to date, Shacham said. The company’s offices are located at the Highroad Innovation Cente in the central Israeli small town of Azor.