Much of the Israeli economy has come to a grinding halt due to the coronavirus (Covid-19) crisis, but for local retail supermarket chains, business has never been so good.

Tel Aviv-listed Shufersal Ltd. announced on Tuesday that it has recruited 1,500 new employees over the past week alone in an effort to reduce the waiting time for its online deliveries. Shufersal’s stock surged 19% on the Tel Aviv Stock Market between March 12 and 17 but has since fallen by 10%. 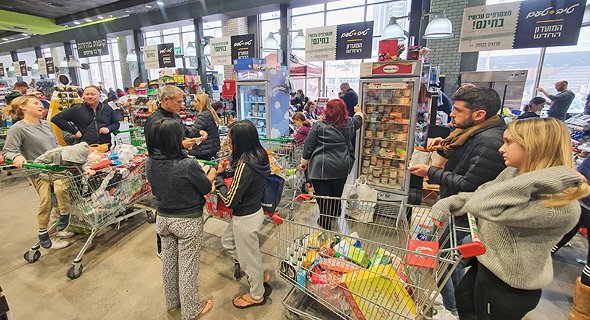 Another supermarket chain, Victory, has also reported the addition of hundreds of new employees. "We are experiencing a jump in online orders of a magnitude we never imagined possible," Victory CEO Eyal Ravid told Calcalist.

According to a report by consumer goods market research company StoreNext Ltd., the past week has seen a 40% jump in sales compared to an average week during the past year, reaching NIS 1.3 billion (approximately $359 million). The lion's share of the upsurge (75.2%) was the result of rising demand for latex gloves, disinfectants, and pasta, StoreNext’s report found. While the reported expenditure for consumer goods was well above average, it was nevertheless 3.9% lower compared to the previous week. According to StoreNext’s report, the biggest winners of the past week were the chains' smaller branches located within residential neighborhoods, recording an increase of 45% compared to an average week, NIS 406.5 million (approximately $111.75 million) compared to NIS 280.8 million (approximately $77.8 million).