A 100-Kilometer Commute to Save Israel's Aging Ventilator Machines

With less than a month to retirement, Rudin Rosenzweig, the head of Medtronic’s Israel lab, makes the long daily commute to fix old decommissioned ventilators and help the country meet its Covid-19 needs

TAGS:
As the number of confirmed coronavirus (Covid-19) cases in Israel continues to rise, one of the country’s biggest concerns is whether it will have enough ventilator machines to support critical patients. According to the Israeli Ministry of Health, Israel currently has just over 2,000 ventilators in its possession, dozens of which are faulty. In the past few weeks, 26 ventilators were admitted for repair at medical device maker Medtronic PLC’s service shop in northern Israeli town Yokneam. 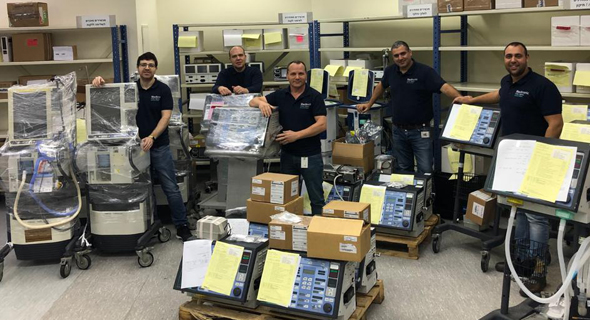 Medtronic's team. Photo: Medtronic
When the crisis first broke out in China, Medtronic estimated coronavirus will soon reach Israel, the company’s Country Director Yaron Itzhari told Calcalist. Medtronic approached local hospitals and asked them to bring in old ventilator machines that have been decommissioned to be treated at no cost, Itzhari said. Some hospitals still use the old models so the company keeps a supply of spare parts for them, he added. Rudin Rosenzweig, 67, heads the Yokneam lab and is due to retire at the end of the month. For now, he still takes the 100-kilometer trip from his home in Rishon Lezion in Israel’s center every day to repair the old ventilators. Some machines take a day to bring up to code, others take several days, it depends on the specific malfunctions, Rosenzweig told Calcalist.

“These devices have been sitting in storage for years, sometimes you need to fix an electronic card, sometimes replacing the batteries or oxygen sensors is in order,” Rosenzweig said. “At the end of the day, we are talking about human lives, you do not play around with that,” he added. All of the lab’s employees recognize the significance and nobody is staying home, they are all here, Rosenzweig said. “We already sent back 15 fully operational ventilators to hospitals and intend to deliver the rest by Passover eve,” he said.

Medtronic is also due to deliver Israel’s Defense Ministry with several hundred ventilators from its factory in Ireland by the end of the month. Up until a few months ago, the factory produced 250 machines a week. It has since more than doubled its production to meet global demand.

Last week, Medtronic announced it has made the plans and schematics for one of its older ventilator models open source to let other companies around the world produce it. The released model has been in circulation since 2010 and can be used on coronavirus patients at the hospital or at home but is not intended for intensive care patients.
Related stories:

Despite Medtronic’s extraordinary announcement, it would take weeks or even months for other companies to produce the machines as they would need to secure a parts supply chain as well as regulatory approvals.

The manufacture of ventilators is now at an all-time high, but companies that get into it now, using Medtronic’s schematics, could find themselves reaching the market long after the number of patients peeks and demand dwindles, which would see the market flooded with these machines for many years. Medtronic, however, as one of the world’s largest medical device companies, will continue to produce and sell its other patent-protected devices, such as its proprietary insulin injectors.
Recently Read