Silicon chipmaker Intel has signed a deal to acquire Israel-based public transit navigation app developer Moovit App Global Ltd. for an estimated $1 billion, according to one person familiar with the deal who talked to Calcalist on condition of anonymity. This deal constitutes a major exit for a company that has raised only $134 million to date.

Moovit was founded in 2012 by Roy Bick, Yaron Evron, and CEO Nir Erez. The company employs some 215 people in its offices in the central Israeli town of Ness Ziona. According to one person familiar with the matter who spoke to Calcalist on condition of anonymity, Moovit intends to share any sums gained from Intel that exceed $1 billion—estimated at between $100 million and $200 million—with its employees, dividing the money according to seniority. 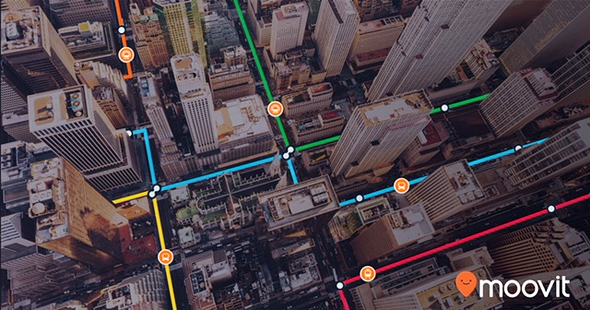 “Intel’s purpose is to create world-changing technology that enriches the lives of every person on Earth, and our Mobileye team delivers on that purpose every day,” said Bob Swan, Intel CEO. “Mobileye’s ADAS technology is already improving the safety of millions of cars on the road, and Moovit accelerates their ability to truly revolutionize transportation - reducing congestion and saving lives – as a full-stack mobility provider.”

Intel Capital is one of Moovit’s main backers and this is not the first time Intel decided to acquire an Israeli company it invested in. In the past few years, Intel has become the most prominent buyer of Israeli tech companies, with its most extravagant purchases being Mobileye—acquired in 2017 for $15.3 billion—and Habana Labs Ltd.—acquired for $2 billion last year.

Intel’s purchase of Mobileye turned the latter's Jerusalem offices into the chipmaking giant’s most important autonomous vehicle center. The Mobileye deal was complemented by the purchase of Habana Labs, which focuses on artificial intelligence chips. In 2018, Mobileye co-founder Amnon Shashua joined Moovit as an advisor.

“Intel’s purpose is to create world-changing technology that enriches the lives of every person on Earth, and our Mobileye team delivers on that purpose every day,” said Bob Swan, Intel CEO. “Mobileye’s ADAS technology is already improving the safety of millions of cars on the road, and Moovit accelerates their ability to truly revolutionize transportation - reducing congestion and saving lives – as a full-stack mobility provider.”

Not all of Intel’s acquisitions in Israel were as successful. Its 2011 merger with Herzliya-based Telmap Ltd., for example, failed to achieve its intended goals. Intel paid around $200 million for the Israeli navigation app developer, an acquisition that was supposed to be its entry ticket to a new industry, but was unable to harness its technology and decided to shut it down after just two years.

It appears Intel wants to be the next Google but is not quite sure how to make that happen, Shmulik Karpf, a global equity analyst for Israel’s Bank Leumi, told Cacalist in an interview. Intel’s acquisition of Moovit is very reminiscent of Google’s merger with Waze in 2013, Karpf said. “In both cases, the acquired company is the developer of a free mobile app providing a navigation optimization service to individuals and companies,” he explained. “Another similarity between the two deals is the acquiring company’s deep pockets—for both Intel and Google the acquisition sum is insubstantial compared to their available cash balances,” he said.

The big difference between the deals, however, Karpf said, is in the acquiring company’s field of activity. “While Google is a software giant with years of experience in the mapping and navigation field, Intel is first and foremost a hardware company that has no experience or special knowledge in software-based crowd-sourced apps,” he said.

Moovit is among the leading players in the field of public transit navigation, reporting 775 million users in 3,100 cities located in 102 countries.

During its first years of operation, Moovit focused on offering end-users a free service but over the past few years, it has expanded its business model to include service to municipal governments. Cities around the world now use Moovit’s technology to map out and improve their public transportation systems.

Other services offered by Moovit utilize the vast amounts of data collected by its app, which is extremely useful now, with the global coronavirus (Covid-19) outbreak. Public transportation operators around the world had to significantly cut back on their service and keep their passengers up to date. As a result, Moovit formed multiple collaborations with public transportation companies in order to make data more accessible and help operators reorganize.

Moovit also developed a management platform that can be customized to suit the varying needs of each operator and city in accordance with local regulations. In some cities, Moovit’s app lets users preorder a seat on a bus or an on-demand shuttle service, similar to the ones operated by ridesharing company Via Transportation Inc.

Before choosing Moovit, Intel was in advance negotiations with Via, according to one person familiar with the matter who spoke to Calcalist on condition of anonymity. After the negotiations failed, Via went on to raise $400 million at a $2.25 billion valuation in march.

Both Via and Moovit, however, suffered a significant blow due to the coronavirus outbreak, as their business models are based on public transportation which has either been shut down completely or significantly downsized in the past few months, with only the most essential services left running.

It remains unclear whether or not Moovit’s valuation for the deal was affected by the crisis but the uncertainty concerning a return to normalcy is undoubtedly looming over any deal signed during this period. For Moovit, this is probably the best deal it could have gotten. For Intel, the merger will be a test of its ability to integrate Moovit’s technology with Mobileye’s and maintain Moovit’s position as a market leader.

Moovit is not the first significant exit seen by the Israeli tech industry since the crisis started. In March, American private equity firm Hellman & Friedman LLC (H&F) agreed to acquire cybersecurity company Checkmarx Ltd. for $1 billion, but Moovit’s acquisition is far more significant, in terms of its nature and timing.

These are unhappy days for most tech companies. Many of them have lost clients and found their international operation had shrunk significantly, especially those companies operating in the most vulnerable industries, including sports, entertainment, and travel. Intel, however, much like other giants, including Amazon, Apple, Facebook, and Google, is carrying on at full speed to take maximum advantage of business opportunities.

Unlike startups, these multinationals are not forced to make significant layoffs or cutbacks and most of them are even continuing to hire top talent in Israel and around the world, focusing not only on the days ahead but also on maximizing the potential of the crisis. Apple and Google, for example, are collaborating on mapping patients and the virus’ spread and Amazon is at the forefront, delivering essential products to home-bound consumers. All of these companies also launched multi-user video chat tools, which are becoming increasingly popular for both business and leisure activities.