The heads of Anodot, IntSights, Kaltura, and Workiz speak about running companies during a crisis at Calcalist and Google’s Startup Week conference

TAGS:
“A layoff strategy eventually ends up costing money. If you are dealing with a temporary event that lasts several months, recruiting people later is even more expensive, especially when you are talking about quality workers,” said David Drai, founder and CEO of autonomous analytics platform Anodot Ltd. Drai spoke on a panel of CEOs during Google and Calcalist’s Startup Week Conference. The panel was hosted by Calcalist journalist Hagar Ravet and featured the CEO of Workiz Adi Azaria, Michal Tsur, co-founder and president of Kaltura and Guy Nizan, co-founder and CEO of IntSights Cyber Intelligence Ltd. Drai added that instead of adopting a layoff policy during the height of the coronavirus (Covid-19) pandemic, his company opted to cut its managers’ salaries over cutting back on its workers and that too only for a limited time. “It was an immediate solution that was born from the understanding that we would rather reduce salaries than fire workers. We are re-setting our course every month,” said Drai. “The outlook is positive, things are looking encouraging. We managed to reduce marketing and new recruits and took several steps with the realization that we would experience painful setbacks on one hand and successes on the other. Our product is a platform and it works with many verticals—some of them not only haven’t been harmed but actually expanded.“ 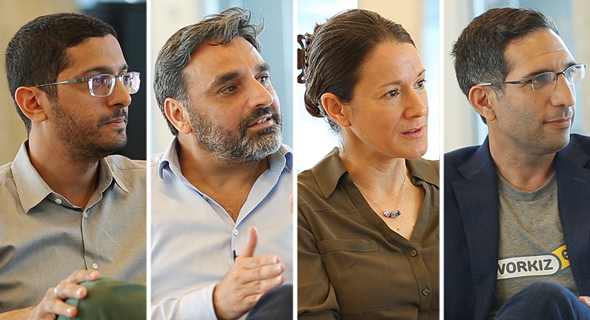 Adi Azaria, Workiz (Right) Michal Tsur, Kaltura; David Drai, Anodot; Guy Nizan, IntSights
How did you cope with the crisis when it began? “You need to differentiate between what’s going on in terms of the disease and what it means for the world of video technology, where we are seeing a positive impact on business,” said Tsur. “Video is becoming an extremely important tool for presenting information, communicating with clients, and communications within companies. Demand has increased substantially. At the beginning we were balanced, now we are seeing that our vision that sees video as a critical tool for all communications is becoming a reality and will likely stay with us long after the crisis. The crisis saw sharp stock market drops and financial pressure. How did you cope with that in terms of personnel cutbacks? “When the crisis began we made two immediate decisions: the first was to freeze marketing and travel expenses, the second was not to go overboard when it comes to protective measures,“ said Nizan, whose company’s product detects and prevents remote threats. “We realized that lots of things, even education, were going online. The risks and threats of fake websites are becoming more significant and we decided not to rush to lay people off. We started to examine the new business opportunities the market opened up and saw that the opportunities overshadowed the challenges and the slowdown. Now we are in a good place and even started recruiting again,” he said. “I think this is a very positive event for all tech companies around the world when it comes to valuations and wages,” said Workiz’s Azaria. “Our first step was to see where most of the money was being burnt. We are an international company and we went into a defensive position that dictated that we cut marketing by two thirds and, as a result, cut back on sales too. I can say in retrospect that it did the company good. It is very painful to say goodbye to people, and clearly you don’t say goodbye to your best people, but unfortunately, you have to do it. We also cut salaries across the board, naturally more from the management’s salaries, but at the end of the day, survival is the goal, to buy time until the next surge because we don’t know when it will be.” “The world we deal with is a world of plumbers, of electricians, of trash disposers, they had to adjust to a world where you can’t pass on a piece of paper anymore, so we played on that, shifting our messaging, integrating with Zoom and letting them consult people remotely. I am pleased to say that the company has grown, so I guess the processes the world is experiencing are not that bad,” said Azaria. Do you think there is an opportunity here for a correction in terms of salaries that in the tech sector may have been too high?

“I don’t believe in corrections. I don’t think Covid-19 should impact salaries. There is supply and demand, that’s life. If there is a good worker that deserves to be paid handsomely, pay them. There are also alternatives. For example, we determined wage presets that we don’t deviate from,” said Azaria.

“The tech world’s impact is not something that is going to go away. Many other sectors are turning to technology, for example, the medical world and the retail world,” said Tsur. “The tech sector is driving growth and change across all sectors right now, so I don’t think salary adjustments are just.”