The U.S. secretary of state’s irregular visit to Israel last week was meant to signal that the trade war with China is escalating in the wake of Covid-19

TAGS:
In Israel, defense has always been the number one item on the agenda, so when U.S. Secretary of State Mike Pompeo made a rushed visit to Jerusalem at the height of the coronavirus (Covid-19) crisis, most people assumed it had to do with matters of defense or Israel’s recently announced plans to annex the West Bank. But, as opposed to Israel, where defense reigns supreme, for Americans it is always about the money. Israelis were surprised to find out that the reason Pompeo exited lockdown and took a plane to Israel at this time was to warn Jerusalem against extending its economic cooperation with China. The warning was particularly meant to address a desalination plant but that is just the tip of the iceberg. The unusual visit was meant to signal to Israel that the war is already here and it will soon have to pick a side. 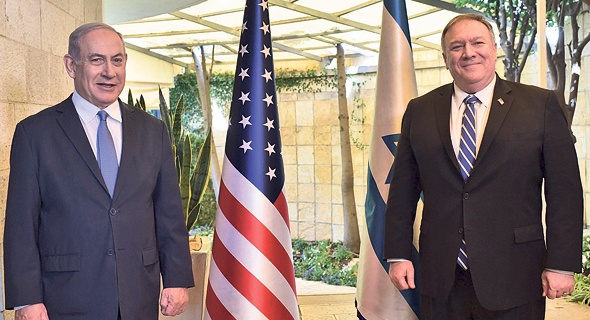 Benjmain Netanyahu and Mike Pompeo at his residence in Jerusalem. Photo: Kobi Gideon/GPO
This time it won’t only be a trade war. A new cold war between the U.S. and China is in the cards and like in the original cold war with Russia it will be impossible for Israel, which is unquestionably a U.S. ally, to be in the unaligned camp. Navigating the treacherous waters of the conflict between the U.S. on one side and China, which before the crisis was expected to bypass the U.S. as the world’s largest economy, on the other, will be a daunting task for Israel’s incoming Minister of Foreign Affairs Gabi Ashkenazi. Israel has worked hard over the past few decades to expand its trade relations with China, an effort that has borne fruit in recent years. The events taking place on the global stage may force the Israeli government to hit ‘delete’ on these processes. The next war will be dubbed the “supply chain war” and the pieces have already started moving on the board. "These stupid supply chains that are all over the world—we have a supply chain where they're made in all different parts of the world… And one little piece of the world goes bad, and the whole thing is messed up," U.S. President Donald Trump said in an interview with Fox Business Network that aired Thursday, while Pompeo was traveling to Israel. "We should have them all in the U.S.," Trump concluded. A few hours after the interview, New York and Taipei-listed Taiwan Semiconductor Manufacturing Co. Ltd. (TSMC) announced it would build a new $12 billion manufacturing plant in Arizona. It was not a coincidence, rather the result of constant pressure by the Trump Administration that does not want TSMC to provide its chips to Chinese mobile phone manufacturer Huawei. TSMC also makes chips for Apple, NVidia, and Qualcomm. Apropo Hauawei, on Friday, the U.S. Commerce Department said it was moving to restrict Huawei's ability to manufacture and obtain semiconductor chips using American-made software and technology. The response from Beijing was swift, hinting that it may retaliate by including major American companies, the likes of Qualcomm, Cisco, Boeing, and Apple, on China’s unreliable entity list. Such a move would strike a particularly severe blow to Boeing, which is already in a dire financial situation due to the flaw in its fleet of MAX 737 aircraft.

The establishment of the TSMC factory in Arizona marks the start of an onshoring campaign, a term that will become prevalent in the coming years. Decades of globalization, which began after the end of the cold war and the fall of the Soviet bloc, pushed for the distribution of manufacturing operations to locations with low production costs. That is how the pre-Covid-19 world found itself with China and East Asia as its factory.

The global pandemic and the supply chain disruption it caused exposed the high level of dependence on that part of the world, most notably when Apple said it would not meet its first quarter targets because of the cessation of activities in its Chinese plants.

It is not only TSMC. Intel is already significantly expanding its old factory in Arizona and is reportedly in talks to establish another manufacturing plant there. In a recent conversation with analysts, Teva Pharmaceutical Industries Ltd.’s CEO Kåre Schultz was asked about onshoring of production facilities to ensure the raw materials and active agents needed for the drug industry are safely on U.S. soil in case of future crises.

The White House is currently drafting an order that would force the manufacture of certain types of medicine to take place within the U.S. a move that could rearrange the supply chain map. Today, 72% of the raw materials for the U.S. drug industry are produced abroad.

Schultz did not rule out the possibility of moving part of Teva’s production, which is currently done mostly in China and India, to the U.S., but said it was a political issue. He did not shy away from saying that such a shift would require significant waivers and benefits for Teva since the U.S. was unable to compete with Asia when it comes to production costs.

Coincidently or not, this week Teva cut off settlement talks with the U.S. Justice Department’s antitrust division over the generic drug price-fixing scandal. If the issue reaches a criminal indictment against Teva, it will no longer be allowed to sell drugs as part of the U.S.’ national social insurance program Medicare. It seems like Teva is counting on the administration not pushing for an indictment as long as there are talks of opening new production operations in the U.S.

Either way, onshoring is just in its early days and will likely take as long as the reverse trend took. Japan too has announced that it was establishing a new fund aimed at reviving production within its borders.

For the time being, the U.S. and China are still considered adversaries and not enemies, but the Chinese need robust tech production and export in order to meet the five-year plan that ends next year. They may not care if textile or toy manufacturing plants relocate to other countries, like Vietnam or Bangladesh, but computer chips and drug industry raw materials are a different story.

It is too soon to determine how the government in Beijing will react to the U.S. government’s policies, after all, the two countries were on the verge of signing a new trade deal that would reduce Washington’s trade deficit and raise taxes on Chinese products, but the deal was supposed to have a second phase the future of which is currently uncertain. 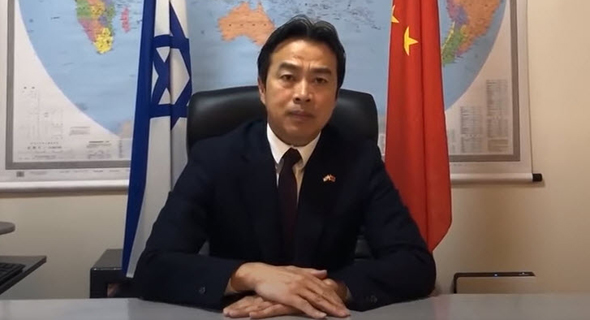 Being a tech powerhouse, Israel finds itself deep in the brewing cauldron, mostly because China sees Israel as a means to attaining the technological superiority that the U.S. fears so much. The issue is so important to Beijing that the Chinese embassy to Israel wrote an open letter in response to Pompeo’s visit which was published by Israeli English language newspaper The Jerusalem Post to ensure that Americans could read it too.

In the letter, the embassy official rebuked Pompeo’s anti-China rhetoric, referred to Israelis as “Jewish friends,” and explained that the Americans were to blame for their current dire situation because they “missed the opportunity window,” despite Beijing’s warnings. But the crux of the letter came to show how small Israel’s share in Chinese investments is.

The reference to Intel is no coincidence either. A large portion of Israel’s export to China is the result of the work of the American semiconductor giant, which also makes up a central part of those “stupid supply chains,” Trump was referring to.

Although exports to China are infinitely smaller in volume than Israeli exports to the U.S., Israel's largest trading partner, they are growing rapidly. Trade in commodities increased by 140% between 2014 and 2018. The services sector also saw rapid growth with an increase of 9% totaling $ 735 million in 2019.

This number is interesting because it mainly reflects the work of research and development centers of Chinese companies in Israel, which may be one of the sensitive points Israel will have to address as the China-U.S. conflict escalates. One of these development centers is Toga Networks Ltd., a subsidiary of Huawei.

The numbers suggest that Israel has much to lose if it is forced to unequivocally choose a side. The best case scenario may be hoping that Trump gets distracted by his re-election campaign and Israel can continue to walk the fence in the meantime.