TAGS:
Such has been Australia's success with containing the coronavirus (Covid-19) pandemic that it has committed to removing most social distancing restrictions by July. With fewer than 20 new coronavirus cases each day, a little over 600 active infections as of Friday, and a total of 101 deaths from the virus, Australia is even seeking an exemption from a requirement that travelers arriving in the U.K. quarantine for 14 days. "Australia has led the world in the successful containment of Covid-19, which clearly means that travelers coming from Australia would pose a low risk to the rest of the world,” was how Trade Minister Simon Birmingham put it in a statement on Friday. Australia's entrance into the new normal makes it an especially intriguing trade destination for Israeli companies, either those searching for new markets during this time of crisis or those aiming to build on the business they are already doing Down Under. 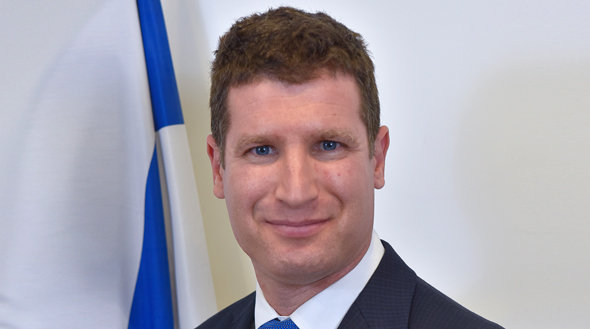 Shai Zarivatch, head of the Israel Trade Commission in Australia. Photo: Shlomi Amsalem/GPO
"Australia is in the midst of its exit strategy, and unlike in other places, when there is a crisis or downturn they believe the way to move forward is through adaptability and innovation," Shai Zarivatch, head of the Israel Trade Commission in Australia, the commercial and investment arm of the Israeli Embassy in Australia, told CTech last week. "The Australians are telling me that the faster they move and the faster they adopt new tech, the quicker they will get out of this situation." Zarivatch and his team, one of 44 economic missions operated globally by the Ministry of Economy and Industry, spent much of the start of 2020 preparing for the visit of Israel president Reuven Rivlin, who was also accompanied on his visit by a trade and business delegation. "My year had two main pivots, the first was the President's visit which kept us busy from the beginning of the year. Two weeks after that we were already in a state of lockdown," said Zarivatch. "At the end of February everything was just fine and functioning regularly and our office had one of its peak events of recent years, with the historical state visit of President Reuven Rivlin. That was the last week of February and after that everything changed." 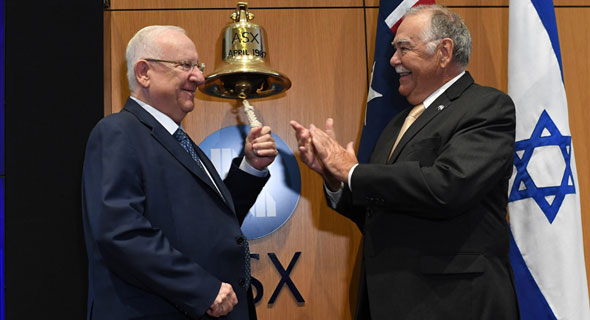 Israeli President Reuven Rivlin visits the Australia Stock Exchange. Photo: Kobi Gideon/GPO
Zarivatch elaborated on some of the differences in the way Australians dealt with the pandemic compared to other countries. "The Australians are not familiar with a state of national crisis. Culture wise it is something Australians are not familiar with. They have never had anything like this in their country's history. It is a mentality of complacency and reality took time to sink in," he said. Nevertheless, the government acted quickly, including from a financial standpoint. Australia announced a record $80 billion jobs-rescue plan in late March, pledging to subsidize workers’ wages. The package sees the government pay wage subsidies of around $980 (A$1,500) every two weeks per employee to help struggling businesses. It took the total fiscal and monetary stimulus during the pandemic to A$320 billion (around $209 billion), or 16.4% of gross domestic product. "All in all this seems like a remarkable success," Zarivatch said. "A lot of people lost their jobs and there is a lot of uncertainty, but generally it is working very well. With everything that is non-essential closing, a lot of people were immediately in trouble. The country introduced a massive emergency stimulus package that is supposed to help companies avoid shutting down, by offering massive financial support to companies not laying off employees and extended benefits to those who lost their jobs. The aim is that instead of companies laying off millions of people and the state giving them unemployment benefits, the government stepped in and started to provide funds so that the companies can continue to pay the employees." Zarivatch said there are more than 200 Israeli companies that have operations in the Australian market, mainly in the fields of cyber, agriculture, retail, mining, drones and fintech. "They are facing the same hardships and difficulties like any other company in the country, but if they are locally registered and based they are entitled to all the benefits and stimulus support granted by the federal government of Australia," he explained. Zarivatch said the number of requests for assistance received by the economic commission over recent months has increased considerably. "There is a wave of Israeli companies that created and developed solutions that could be relevant to the time of the pandemic which they would like to introduce to the Australian market," he noted. "We are seeing a surge of interest in the Australian market. From the Australian side, there is a strong appreciation of Israel and Israeli companies and a very strong appreciation of technology and innovation. That culture isn't as developed as it is in Israel and other countries so there are always opportunities in the Australian market." Zarivatch explained that the Australian economy is largely characterized by big corporates, predominantly in the field of mining, the largest industry in the country. "The reason Australia is so wealthy and successful is because of the mining industry," he said. "There is no mining industry in Israel but all the Australian corporations are very open to innovation. They don't have their own innovation, so they don't have solutions for issues like water, energy, cybersecurity and AI. It is all new to them but they are very open." The Australian market provides some unique challenges for Israeli businesses. "One needs to realize, and I say this many times when I speak to Israeli businesses, that in Australia you have to be present in the market. You cannot just send emails or hold Zoom calls. There are many challenges, but then again it is a promising and competitive market that is open and has appreciation to Israel and Israeli technologies. "In a way, things move slowly and you have to create a level of trust with those you are doing business with. A lot of Israelis are sure that we have the best technology in the world and all they need to do is show their demo and the client will buy or invest. It doesn't work that way. You have to invest time and energy and build trust." The mission had planned to bring a delegation from Citibank Australia to the FinTech Junction conference that was meant to take place in Israel in June. But with the conference canceled, they instead decided to put together their own online event. "The conference will be not just with Citibank officials, but also with their clients and members, including private equity funds and pension funds," said Zarivatch. "It will include three Israel-focused panels and we are expecting between 50-100 Australian companies to tune in. This will be an invite-only event and won't be open to the general public."

Zarivatch said there are essentially two main pillars to the work of the commission, which aims to provide support from start to finish to Israeli businesses. "We provide individual support to every company that approaches us and we are working with them, guiding, navigating, opening doors and then following up," he said. "We also create value for industries that are relevant to the Australian market, sectors in which Israel has a competitive advantage like agriculture technologies, cybersecurity, AI, water technologies, drones and fintech. These are all very relevant and very interesting to the Australian market.

"We essentially serve as a bridge. When I start to explain who we are and what we do I say we are a business development office and that we provide business development services in different shapes and forms to Israeli companies, businesses, entrepreneurs and investors who want to operate and be successful in the Australian market,” Zarivatch added. “We are here for you guys. We are happy to find information and identify potential partners, connect with them, introduce and open the door and work with you, hopefully until a deal is done."
Buzz