TAGS:
Watchful Technologies Ltd. announced on Wednesday that it has raised $3 million in a seed round led by Israel venture capital fund Vertex Ventures, alongside several Israeli angel investors. Watchful develops technological solutions for competitive intelligence. The founder of the company is Itay Kahana, who was also a co-founder of Any.do. Watchful has 25 employees, 14 of them in Israel, three in Ukraine, and seven in the Philippines. 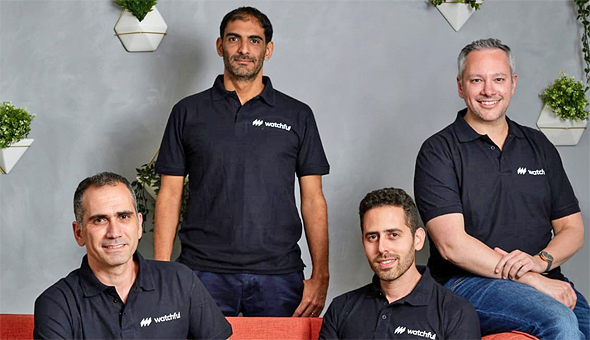 Watchful's management team. Photo: PR
"I take the application and run it in multiple different ways and with varied sources of data. As soon as I have full visibility of the app, I offer my capabilities to say what the app includes, from different collaborations to changes in the terms of use agreement,” Kahana told Calcalist. “In many applications, we revealed small and hidden issues that can sometimes be very significant." “The intelligence solutions currently in the market track external variables like traffic, downloads and users," said Yanai Oron, General Partner at Vertex Ventures. "Watchful takes a different and unique approach in that it provides insights into what is happening inside the app and enables companies to truly understand what their competitors are developing, checking, and planning."

Watchful's platform provides a solution that is focused on uncovering the product strategy and providing companies with detailed information on the changes that the applications of their competitors are undergoing. Watchful can uncover hidden features, A/B testing, changes in the user interface, and even data on performance like how long the app takes to open and how much battery power it uses. The platform also provides companies the same information on their own applications, allowing big organizations to receive a full picture of the progress being made by the competing development teams and to compare the products.

In January of this year, Watchful made international headlines when it revealed that social video application TikTok added a sophisticated deep fake component to its app. The revelation ultimately led TikTok to remove the code from the U.S. version of its application.