When opposites attract: Can Japan help the Startup Nation become the Scale-up Nation?

TAGS:
Economic relations between Israel and Japan have experienced unprecedented growth over recent years. However, the potential is so much greater, especially considering the challenges the world faces in the post-Covid-19 new normal, says Minister Kazuhiko Nakamura, Deputy Chief of Mission of the Embassy of Japan to Israel and the head of the Embassy's Economic Department.

Over the past five years, Japanese companies have increased their presence in Israel substantially, with only 26 companies having offices in the country in 2014 compared to 92 last year. Prior to Japanese Prime Minister Shinzo Abe's visit to Israel in January 2015 with a large delegation of business leaders, Japanese companies and corporations made on average of fewer than 10 investments per year in Israel. In 2019 that number reached 51.

"It is very simple and clear to us. Israel is important to us particularly from the perspective of innovation," Nakamura told CTech last week. "Maybe the biggest challenges in the coming decades for the Japanese economy will be the improvement of our productivity and we considerably need innovation for that. In this context, we really lend particular importance to cooperation and partnership with Israel which is a startup nation and has a really marvelous capacity to innovate." 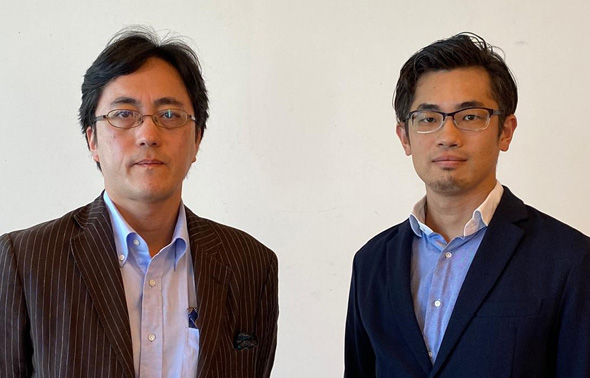 Minister and Deputy Chief of Mission Kazuhiko Nakamura (left) and Commercial Attaché Motoki Kurita of the Embassy of Japan to Israel. Photo: Courtesy

Motoki Kurita, Commercial Attaché at the Embassy of Japan, believes that Israel and Japan are a perfect combination for innovation. "The cultural difference is very large. Sometimes it is said that we even have opposite cultures. Israelis are high-risk takers, fast, speak frankly and casually while the Japanese consider all the risks before starting. These differences sometimes make both parties frustrated, but I think that because of this difference the combination of Israel and Japan is perfect for innovation," explained Kurita. "Innovation is created by the collision and fission of two different things. So I believe that we can create truly disruptive innovation together."

Nakamura feels that the collaboration between Israel and Japan is especially promising as "Israelis are very good at creating 1 from 0, while Japanese are better in increasing 1 to 10."

"By combining Israeli startups and Israeli business and academic communities capacity to create innovation with Japanese business communities capacity to mass-produce, standardize products and marketing capacity worldwide, we believe that Israel and Japan are able to do far better in the future when it comes to creating and selling products worldwide with Israeli technology," he said.

According to Nakamura, the fact that Japanese and Israeli business representatives stopped traveling back and forth over recent months due to the coronavirus pandemic has stalled, at least temporarily, Japanese efforts by either newcomers to Israel or those who had yet to engage in concrete business relations. But it isn't all bad news. "On the other hand, being here in Israel we observe that those Japanese VCs who already have a solid presence and relations in Israel haven't really reduced their activities or reduced their investment in innovation, or their efforts in looking for further new innovations in Israel," added Nakamura. "This is a good and positive sign for our bilateral economic relations. I would also add that generally speaking most Japanese companies established a quite high level of internal reserves in their respective companies due to past experience from previous economic crises, which means that we believe that most of those Japanese companies will survive the current economic crisis relatively well. In the global context of very low interest rates, and in the context of the global efforts that must be launched in coming years to reshape global society to adapt to the new normal after Covid-19, Japanese companies will certainly be encouraged to relaunch their search for innovation. I believe that in this context Israel remains the top priority."

Most countries, including Japan and Israel, did their best to tackle Covid-19 internally, but Nakamura believes the way in which they will cooperate going forward is far more significant. "I believe that what is more important and crucial is not the cooperation until now but rather the cooperation in the coming months and years," he noted. "There is a need to create a new set of rules and principles, or way of life, by introducing technologies, innovations, and designing and creating new products that would be able to sustain our way of life even amid the Covid-19 propagation risk which will, unfortunately, persist in the coming years. We will certainly need several, or in some cases many, international partners to continue to cooperate and even deepen our cooperation to forge together the new way of life, the new society in which we would be able to pursue the values and principles to which we have attached importance, such as transparency and free flow of capital and people. From this standpoint, and not only from the technological point of view, we think Israel is one of those important partners for us."

While Japanese companies are invested in many different industries in Israel, two specific sectors that received additional focus in an industrial Memorandum of Understanding (MoU) were cybersecurity and digital health. Nakamura said this reflects the Japanese government's interest in these sectors, which also corresponds to the country's needs in coming years, particularly after the Covid-19 pandemic. "In the post Covid-19 world, we in Japan have to establish or improve our society's economy to better integrate information and communication technologies (ICTs) in fields like remote work, remote health, and remote education, which will also result in a need for improved cybersecurity."

Nakamura encourages Israeli companies to go and do business in Japan and has some advice for them. "Israelis take risks and are very rapid in making decisions and judgment and express themselves very frankly. Japanese are more prudent in taking into consideration every possible risk in a business and putting in many cases more importance on the quality of the goods and service than on speed. They express themselves in a rather indirect manner in many cases in order to be polite to everyone. So I think Israelis when doing business with Japanese counterparts should take those aspects into consideration," he explained. "Maybe for the Israeli business communities the Japanese way of doing business seems to take too much time and be frustrating, but once the genuine relation of confidence is established with Japanese business counterparts, I can assure you that the relations are really solid for the long term and the Japanese business counterparts would really do anything and spare nothing to support their business counterparts. I would advise Israeli business leaders to be a bit patient and to profit from long term relations with Japanese companies."

Nakamura also stressed that Israeli companies should make the most of the many medium-sized businesses in Japan and not just focus on working with giant corporations like Toyota and Nissan or the mega banks. One such medium-sized company by Japanese standards is the world’s largest automotive headlight manufacturer, KOITO Manufacturing Co. which last June led an investment round of $25 million in BrightWay Vision, a spinoff of Elbit Systems based out of Haifa, which develops a gated imaging system for vehicles.

The culture barrier also presents difficulties for Japanese companies working in Israel, resulting in some of them hiring an Israeli to head their local branch, so as not to miss out on top-tier opportunities. “I wouldn't say it is a trend, but I noticed that several Japanese enterprises are opting for that option," said Nakamura.

While the nickname of startup nation has stuck, Israel is in many ways transforming into scale-up nation, with numerous companies rejecting a quick and lucrative exit in favor of building a unicorn. Kurita thinks this presents even more opportunities for upgrading the already blossoming relations between Israel and Japan and take them to new heights.