The government is trying to boost the tech sector, which is suffering from the Covid-19 crisis, with a series of new and old proposals

TAGS:
The chapter dedicated to the tech sector in the draft of Israel’s annual economic arrangements law, a catch-all government-backed bill that includes various items of disconnected legislation and policy proposals, rests on already existing policies and attempts to revive previously debated actions, alongside lessons learned from the coronavirus (Covid-19) crisis, namely tax cuts for those who invest in the tech sector.

If in previous years the Israeli tech industry’s main challenge was a shortage of labor, the Covid-19 crisis pushed it aside. There are increasing signs that tech companies, like traditional industries before them, are on the verge of a significant wave of layoffs that will see experienced workers enter the market and perhaps even flooding it. The arrangements bill includes a clause related to increasing the supply of skilled labor, but it mostly deals with budgeting universities in the relevant fields to the tune of NIS 273 million (approximately $80 million) and doesn’t address providing rapid solutions to acute shortages by activating various training programs. 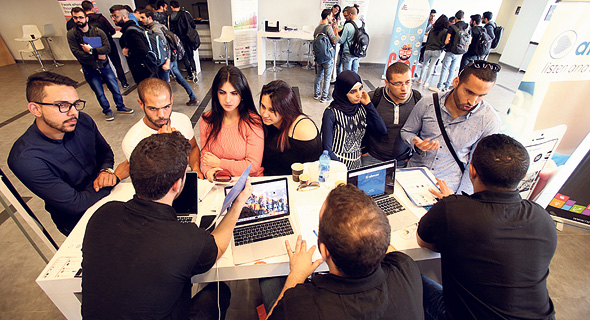 The Israeli tech industry is hoping to receive a boost from the government. Photo: Elad Gershgoren

The draft law mostly addresses what it defines as ‘removing obstacles’ in the tech sector, highlighting three different aspects: angel investments, acquisitions made by Israeli companies, and provision of loans by foreign financial entities.

The focus in the bill is on simplifying the definitions in the “Angel’s Law” (Angels are individual investors, commonly entrepreneurs or former entrepreneurs, who profited from previous exits) that posed obstacles to investors. The items discussed include erasing or changing some of the definitions of types of companies, canceling the requirement for pre-approval by the Israel Innovation Authority, and obligations for annual reporting to it. The changes offer a response to an emerging trend in the Israeli and global investment market of reduced investment in early-stage startups in favor of investment in growth companies.

Additional tax and regulatory relief is offered to Israeli companies that acquire an Israeli or foreign company. These benefits are vital amid the Covid-19 crisis that produced a bounty of purchase opportunities. The goal is to encourage Israeli companies to make acquisitions, rather than be acquired or to give them a boost of inorganic growth and establish them as significant players in the post-pandemic economy.

To that end, the bill proposes to cancel the requirement that no merger between companies is to take place in the event of an acquisition of an Israeli company. In the case of acquiring a foreign company, it is emphasized that the benefits will be granted provided that the intellectual property owned by the foreign company has been transferred to Israel, as well as rules to ensure that the transaction has led to value creation for Israel. The aim is to take advantage of the current crisis in order to encourage a wave of acquisitions by Israeli companies. Naturally, this requires available capital, and there is a clause in the bill that is dedicated to that, proposing to provide foreign financial institutions with tax-exemptions on loans they approved for technology companies.

Nowadays, foreign lenders roll the deduction payments they are obligated to, on the Israeli loan applicant. In order to allow the company a non-capital financing channel, which dilutes Israeli holdings in it and may also result in the transfer of a significant portion of its operations abroad, the proposal seeks to facilitate obtaining financing in the form of a loan.

The most significant clause in the bill in financial terms is the "Advancement of Israeli Technological Leadership” clause, which is dedicated to the implementation of a national $360 million five-year Science and Quantum Technology program for 2020-2025. This is an attempt to advance the 2019 program that has not yet been launched and will be budgeted by the government and participating academic and industry institutions. It will include investment in quantum technology researchers, the establishment of research and development centers for that purpose, and more.