Sealartec aiming to disrupt hundreds of years of maritime tradition

TAGS:
The fact that Amitai Peleg and Alon Cohen are aiming to disrupt a practice dating back hundreds of years is all one needs to know to understand the mammoth challenge they have taken upon themselves.

The deployment of unmanned vessels across the maritime domain has been growing at a rapid pace. But the issue of how to place and collect these USVs from the sea has been neglected, making launches and recoveries of the unmanned vessels extremely complicated and limited in different sea conditions while also involving considerable risk to the crews and potential damage to the launching platform. 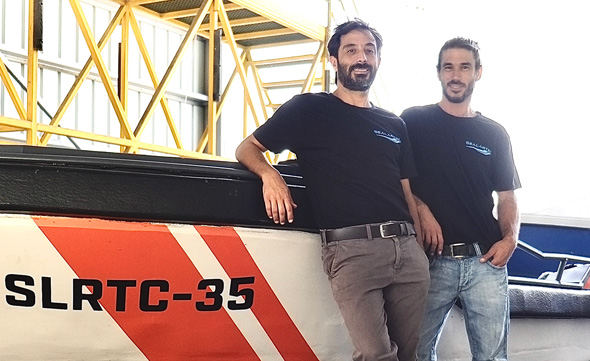 "In the past decade, there were big companies that tried to automate launch and recovery but as there were always humans who could do this it never really came to fruition," Peleg, Sealartec’s CEO told CTech earlier this week. "I always knew that this was a problem that one day someone would have to solve and I had an idea of how to do it and basic principles on how it should work.

"Shipping is one of the oldest professions in the world and has been around for thousands of years,” Peleg added. “Our field of expertise is launch and recovery and that is also something that has existed for hundreds of years. This entire process is dependent on the professionalism of the crew while taking great risks, resulting in injuries and damage to equipment. Essentially launch and recovery right now comes down to two people in a choppy and windy sea tossing a rope at each other hoping that it will be caught. This is how it is done right now and how it has always been done."

Sealartec also provides a solution for the manned boat market, in which human lives are put at risk every day in missions in rough seas. Based on patented technology, Sealartec's system is capable of recovering any manned or unmanned vessel up to Sea State 6 (4 to 6-meter high waves). The system includes a hydrodynamic floating structure with a robotic capture device and an autonomous processes control decision-making algorithm. This combination allows for safe recovery at severe sea conditions while in motion.

"Everyone understood the need and advantages of having autonomous boats but everyone ignored the problem of how we place them in the sea," said Peleg. "The companies that developed the autonomous boats said that they are a tech company and that this is a problem for crane companies. We were in touch with crane companies who are in the business of launch and recovery and they said that they will only research the issue after receiving a specific order."

During a series of trials that took place in recent weeks off the Israeli northern shore, Sealartec demonstrated the capability of its system with a 5m Deep-V mono-hull classic design, autonomous vehicle. The sea conditions were at Sea State 4 with gusting winds.

Amitai Peleg is a trained mechanical engineer specializing in the field of marine engineering and served in the Israeli navy. He met Alon Cohen while working on maritime projects at a previous company and approached him in 2015 when he realized that he might be onto something with his solution for simplifying launch and recovery.

"We self-funded the development of a smaller scale robotic boat and managed to prove in a lab at the Technion - Israel Institute of Technology that our system works flawlessly. We spent a couple of years developing the system without funding until we found a warm home at Incubit, the technological incubator of Elbit Systems, who saw the potential and believed in our technology and helped us complete our seed round. We managed to raise one million dollars between the seed round and self-funding and that allowed us to do a full-scale demonstration in real conditions," explained Peleg.

Peleg believes their product is at least one step ahead of the competition, but he hopes to expand that gap in the coming year.

"We managed to solve several acute problems regarding the interface of moving bodies in the sea that our competitors haven't managed to solve. They took shortcuts and skipped a very important stage so their system is really risky," said Peleg. "But our biggest advantage compared to our competitors is that our system was made for the existing market. We started with the aim of solving the need to place autonomous boats in the sea. But while we were working on that we discovered that the bigger problem is with manned boats. There are tens of thousands of different platforms, from oil rigs to ships, that are placing and collecting boats while risking their men every day. We developed our system so that it is essentially an add on, a missing link. We invented a product that can be connected to any crane and can lift any boat. In half a day’s work and with the addition of just 10 kilograms, which doesn't affect the boat's capabilities in any way, we can make your vehicle compatible with our system and that is a huge advantage."

Peleg said that Sealartec wouldn't have managed to reach its current position without the help of Incubit, which goes far beyond funding. Incubit, which operates within the Israeli Innovation Authority (IIA) incubators program, focuses on early-stage startups and provides a $1.3M equity investment divided into equity investment for two years of operation. It also grants startups the ‘InKind’ package provided by Elbit Systems and an option for a third year of operation without additional equity.

"Incubit only invests in civil startups that innovate in technology that has a synergy with Elbit," Ayelet Ben Arav, VP Business Development at Incubit, told CTech. "This is a win-win situation because Elbit is focused on the defense market so it will never compete with the startups, but only support and complement them. Sealertec, for example, develops products to be used at sea, which is something Elbit is also involved in. Every entrepreneur receives the 'InKind' package that provides all his needs such as office and labs, accounting and legal services, business and marketing mentoring, and supporting future rounds of investments. Sealartec, for example, has been working in the past year out of Elbit's private port in Haifa. What other private company has its own port?"

Sealartec, which has five full-time employees, is currently working on its round A with the help of Incubit and is hoping to complete it within the next six months, although the Covid-19 crisis has definitely complicated matters.

"We have been working recently with an investment bank Incubit put us in contact with and together with them we built our business plan. They approached all the potential investors for us and they told us that there has been a very significant drop in investment, mainly by private investors," said Peleg. "But there is still interest and we have two meetings with potential investors this week. I think that after the initial blow of Covid-19, people are beginning to recover and get back on their feet and are once more seeing the opportunities rather than the risks."

Peleg added that Sealartec is also busy working opposite clients and that there has been a surge in interest since the company revealed the success of its trial.

"Our goal is to use the round A money to accelerate our development and to be two steps ahead of the rest of the market instead of just one. We already have better technology, but we still have a lot of work to do in commercialization," said Peleg, with Sealartec targeting the completion of 2-4 projects over the next year. "The marine industry is very conservative. You need to build trust with the captain of a ship to convince him that this robot can do the job his sailors have been doing for the past 20 years. So we are treating these upcoming projects as a proof-of-concept. We are planning to do 10 of these projects the following year and after that grow significantly."