Similar initiatives, including by Uber, have so far been rejected by Israel's Ministry of Transportation, InDriver says "app is currently not operational in Israel"

The ride-hailing inDriver app has begun offering Israelis to drive additional passengers in their car in return for payment, similar to the Uber model. The company, which operates in more than 30 countries, offers a unique model by which all conditions of the trip are determined over the app as a result of a bidding process between passengers and drivers.

The app allows passengers to determine the amount they would like to pay for a certain journey and then receive offers from available drivers. The company has launched an advertising campaign to promote the use of the app for social media users in Israel. 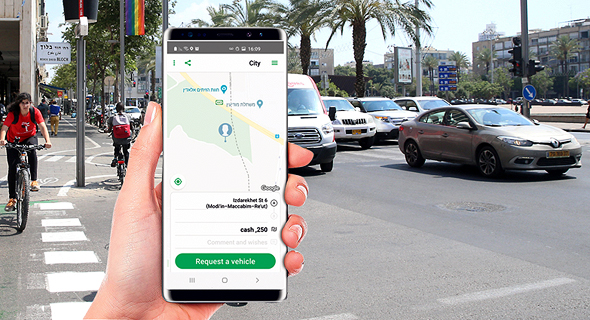 Similar initiatives, including by Uber, have so far been rejected by Israel's Ministry of Transportation and there is no indication that inDriver has received regulatory approval, with the company also not making any official announcement regarding its activity in Israel. Uber has been trying to enter the Israeli market since 2017, but hasn't managed to overcome the influence of the taxi drivers’ lobby among members of parliament and the ministries.

InDriver was founded in Yakutsk, Russia in 2012 on Russian social network VK after local taxi drivers simultaneously doubled the cost of trips around the city. Payment for rides can only be made in cash or bank transfers, with inDriver claiming it doesn't accept credit cards due to the cost of commissions. The company doesn't clarify the status of the driver and passenger from an insurance standpoint and whether the driver is considered a company employee or a freelancer. According to inDriver, it has more than 50 million users in more than 30 countries, including India, Brazil and South Africa.

Indriver said in response that "the inDriver app is not operational in Israel. No one can order a ride, and there is no interface in Hebrew. You can check this if you download the app. We recently conducted market researches. We will inform reporters about our new starts in advance."