Before the ink dries: Everything you need to know about the UAE’s economy

Israeli companies aiming to break into the UAE market will find a local thirst in several sectors, including retail digitization, cybersecurity and health

TAGS:
The United Arab Emirates is an impressive economic success story. The sovereign state at the northeast end of the Arabian Peninsula on the Persian Gulf established 50 years ago with the unification of seven small emirates, has undergone a transformation that has made it a top global business destination. It is no coincidence that it is regularly placed high in global business rankings over recent years, especially when it comes to ease of doing business. According to the Doing Business 2020 report, a World Bank Group flagship publication, setting up a business in the UAE is far simpler than in most Middle East states, with the country ranked 16th in the world in ease of doing business, while Israel is only in 35th place. According to the World Bank, setting up a company in the UAE takes just eight days and requires completing six simple procedures.

This is one of many examples that show that when it comes to business, the UAE does things very differently than most countries in the Middle East. This is the result of the basic premise in the country that it is better to vary income sources and remain up to date with global trends, and not be too dependent on oil production. Considering the above, it is no surprise that the UAE’s market provides exporters, investors, and entrepreneurs an abundance of opportunities with minimum bureaucracy, low taxes, generous incentives, and modern infrastructure - and all to create the ideal environment for growth. The free trade zones in the UAE, which allow for a 100% foreign ownership model with zero taxes, are a prime attraction for foreign investors. 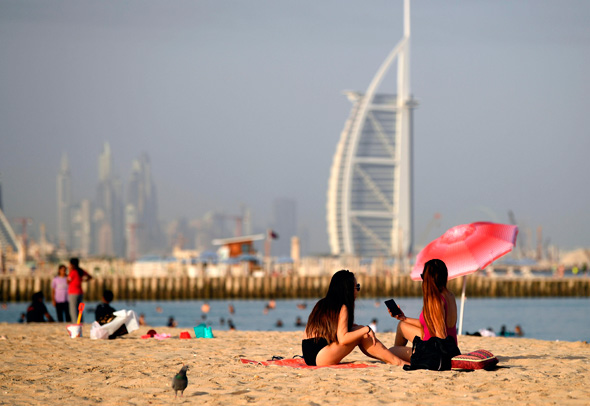 Tourism is among the sectors the UAE is trying to promote in an effort to diversify its economy. Photo: AFP

The leading investment destination in the Arab world

Despite the many global economic crises, over the past decade between 2010 and 2019, the UAE's economy has maintained stability and grown by a total of 45%. That doesn't mean that the UAE hasn't faced its challenges, with the 2008 financial crisis leaving Dubai, considered to be the crown jewel of the Emirates, on the verge of bankruptcy, which it only ultimately escaped from thanks to $20 billion worth of support from Abu Dhabi.

Over recent years the country's growth plans were hampered by regional instability created by the clash between the West and Iran, and it is of course also currently suffering due to the Covid-19 crisis. Nevertheless, the UAE's economy is still regarded to be stable and promising in the region thanks to its meticulous adherence to some basic rules.

The first of these principles is openness. Over recent decades the UAE's economy has been built on financial, liberal and competitive openness, which is expected to encourage Israeli entrepreneurs who are looking to enter its market. This policy is based on the attractiveness of the local market to the global business community and it is no surprise that it became the leading destination in the Arab world for foreign investments. Between 2010 and 2018 the annual sum of foreign investment jumped by 160% from $4 billion to $10.5 billion.

At the same time, the UAE government's strategic plan over the past 30 years has reduced the dominance of the oil sector so that it made up only 25% of the GDP in 2019. Retail accounted for 12.5%, tourism reached 12% and insurance and finance combined for 9%. The diversification of the economy is meant to protect the local economy from fluctuations in the price of oil, with the UAE still having one of the world's largest oil and gas reserves at 100 billion barrels and 350 trillion cubic feet, respectively. The diversification is also evident in the fact that the different Emirates which make up the UAE, focus on different sectors, with Abu Dhabi, for example, the leader in the energy field while Dubai is a center for trade and finance.

The investment in advanced transport and logistic infrastructure has helped make the UAE a global world trade center. Over the past decade, the country's trade without oil more than doubled from $205 billion to $450 billion, $380 billion of which is in import, which testifies to the market's potential for exporters. The UAE also controls several massive funds that provide it with financial solvency. These funds have assets valued at around $2 trillion, with the Abu Dhabi Investment Authority, with assets valued at $700 billion, consistently ranked among the top three largest sovereign investment funds in the world.

As of March 2020, the foreign currency reserves of the Central Bank of the UAE and the country's other banks reached $120 billion. The solvency in the local market was at an all-time record of $480 billion as of the end of April, supported by a powerful banking sector in control of assets estimated at $860 billion. The combination of all the above has helped the UAE overcome financial crises and also provides it with security going forward. In addition, the country's debts are relatively small and are estimated at 20% of the GDP, with the UAE dirham considered to be among the world's most stable currencies. It has been pegged to the United States dollar since 1973, and since 1997 the exchange rate has been set at a rate of 1 U.S dollar to 3.6725 AED.

High investment in the shift to the online world

The UAE's strategic plan for the coming years is focused on additional financial diversification, promoting the country as a global center for trade and tourism, developing local industry and creating opportunities for the locals by developing education and deepening scientific and technological research. Israeli companies have many routes to get involved in these sectors, and in many ways, the UAE's economy is much better suited for Israeli exports than the likes of the neighboring Jordan and Egypt, both of whom it has signed peace accords with. The relatively high standard of living in the Emirates is similar to that in Israel and the local government invests in long term projects. However, some of the world's leading companies are already operating in the UAE's market, which means Israeli companies that plan to break into it will encounter a tough level of competition that could prove to be a major stumbling block.

Israeli companies aiming to break into the UAE market will find a local thirst in several sectors coming on the back of the consistent growth in the retail sector, including in luxury products. Online retail is shaping up to be a sector that will receive plenty of attention in the coming years, with the UAE ranked first in the Arab world, and 12th globally, when it comes to digital competition.

Israeli companies have so far operated under the radar in the country, but their activity is set to receive a boost following last week's announcement. Israeli tech has a strong reputation in the Arab world the way it does across the globe and there are countless opportunities for the sector in the UAE, from app development and online marketing to cybersecurity.

In addition, the quality of the logistical infrastructure and the UAE's strategic location is ideal for entering new markets and reducing costs. The port of Jebel Ali and Dubai's International Airport have given the Emirates an important role in the global supply chain and companies that can help the country strengthen its international status in this aspect are expected to be in high demand.

In parallel to the diversification of the country's economy, the UAE has also allocated massive budgets to the development of the education sector and financial research. While the prospect of Israeli entrepreneurs setting up educational establishments in the country in the near future seems unlikely, remote learning has certainly become far more relevant due to the Covid-19 crisis and can serve as a prime opportunity for Israeli companies.

The health sector and the level of services in the country have made it a destination for many patients from neighboring countries. Dubai has become a center for the global health sector, having the world's largest free trade center in the medical fields. There are currently some 200 companies operating out of that center, and the Covid-19 crisis has only increased the local appetite to deepen the development of that sector.