Deals under the radar: These are the Israeli tech companies already operating in the UAE

Cooperations in the fields of insurtech, biomedicine, fintech, agtech and cyber lead the way, but the potential for future purchases and investments is vast

TAGS:
"I'm very active on Linkedin, I have tens of thousands of contacts and I receive around 10 new requests a day, but something weird happened last Friday. I was swamped with new follower requests. I thought my account was hacked, but when I began looking through the names and the account's analytics I saw that they were all businessmen and senior executives from insurance companies in the United Arab Emirates," Yariv Yanay, Director of Business Development and Innovation at Hachshara Insurance Company Ltd, told Calcalist.

Yanay is one of the founders of the go Digital Insurance application developed by Hachshara for digital car insurance. "I approved all the requests and already set Zoom meetings with them. They ask serious questions that show that they know what they need from us. A representative from a big insurance company there asked me a very specific question about one of our developments in UBI (usage-based insurance) while someone else was interested in learning about dealing with claims digitally, and another inquired if the product suits a B2C market. It was apparent that they had done their homework."

Israel has become an insurtech powerhouse over recent years, even though local consumers aren't aware of the services being offered by many of the companies. "Right now I feel like they are checking us out because they have heard that Israel is an insurtech superpower," noted Yanay. "The potential isn't just in the possible sale of products to the UAE, but that this can also lay the infrastructure for entering the rest of the Arab world and places like Jordan and Egypt. I take part in many international conferences and until now it was very obvious we were outcasts." 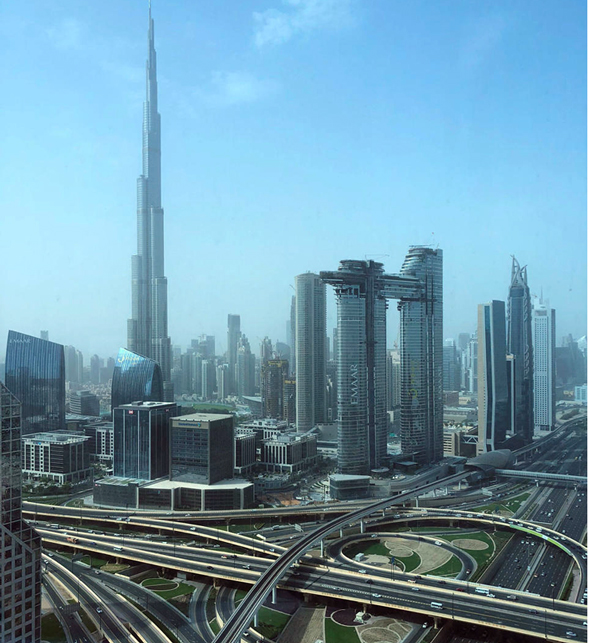 Dubai in the UAE. Photo: Courtesy

Alongside insurtech and biomedicine, the fintech sector has also generated plenty of interest in the UAE. The Israeli fintech sector, which includes 530 startups, attracted record funding of $2 billion during 2019. "This looks like a match made in heaven," said Shmulik Ben-Tovim, president of the Fintech Community of Israel. "While Israel is regarded as a tech powerhouse, but an undeveloped financial center, in Dubai there is the exact opposite situation. Israeli fintech companies will literally be entering a desert."

"Israel nowadays is mainly known in the Gulf states for its aesthetics medical innovation as Dubai and Abu Dhabi have a young and rich population," noted Adi Nov, deputy manager at ICIC - Israel Credit Insurance Company. "Another strong sector is agtech, specifically irrigation technology. There is also business in the plastic industry and some fashion, mainly swimwear and underwear."

According to Paris-based insurance company Euler Hermes, which holds shares in ICIC, Israel's areas of expertise are similar to those of the U.S. which is the third-largest exporter to the UAE after China and India and is responsible for 10% of the imports in the weapons and tech sectors.

Israel's tech companies weren't waiting around for Donald Trump's announcement that Israel and the UAE had agreed to normalize ties, with many companies doing business in the region for several years. Most of them do so via a local distributor, but companies like Cybereason, which is based out of the U.S., have offices in the UAE. "The UAE is a very special and significant market," said Shai Horovitz, Chief Revenue Officer at Cybereason. The leading investor in Cybereason' is the Vision Fund, with half of its $100 billion under management coming in from the Persian Gulf and Saudi Arabia. As a result, the Israeli cyber company has relationships in the region dating back many years.

There are several Israeli cybersecurity companies currently operating successfully in the UAE, including Check Point, which states on its website that it has representation in Dubai; CyberArk which works with a local distributor, and IntSights that has significant sales in the region.

"There is a clear need for cybersecurity products due to geopolitical reasons. The Emirates encounter the same threats that our western clients are facing. The same actors that threaten large financial institutions and government agencies in Europe and the U.S. are also acting against the UAE's interests," explained Horovitz.

Guy Nizan, co-founder and CEO of IntSights, said that Israeli tech is received very well in the region. "It is an advantage because the client recognizes Israeli tech as a brand. moreover, they understand the importance of security and are willing to invest a lot in the sector."

And it isn't just Israeli cybersecurity which is prospering in Dubai. There are several other Israeli tech companies that have made a name for themselves, including Cato Networks, whose core product is a cloud service and operates a server farm in Dubai. Israeli giant Monday.com has also become well known in the UAE over the past three years and is partnering with several companies in the region. "We have over 700 clients in the Persian Gulf and over the last year the company increased its sales in the region by 300% and is planning on reaching sales of $5 million by the end of 2021," said Barak Zigdon, partnerships and global resellers manager at Monday.com. Software company JFron Ltd is also selling to clients in UAE.

One sector with a great potential in the area is agtech, mainly due to the dry climate in both Israel and the UAE. "We have been talking to different actors in the UAE about promoting desert agriculture projects," said Or Haviv, partner and head of ventures at Arieli Capital. "There is no done deal, but we were already discussing it prior to last week's announcement. The UAE wants to learn how to do agriculture in the desert and gain produce which is at the level of that grown in Israel. There is a plan to send a delegation from the UAE to Israel so that they can undergo training at Ramat Negev."

Alan Feld, co-founder and managing partner at Vintage Investment Partners, believes that the UAE is open to investing in Israeli tech in addition to purchasing its products. "I believe that we will very soon see investments in VCs and Israeli companies. They have a VC industry and they also want us to invest in their companies."

"The entire region is a desert and in the middle of it they built an amazing airport and one of the best tourism systems I've seen," added Feld, who was in the UAE in February. "They want to diversify their sources of income and not be so dependent on the price of oil. They see themselves as a regional technology center and Israel is a good source of technology for them."

Boaz Dinte, managing general partner at Qumra Capital, added: "Over the past two years we have received more and more approaches from people in the region who are interested in investing in Israeli funds and Israel in general. From a personal standpoint, I was a little wary as I didn't know what the consequences would be for the fund if we received money from the Gulf. I was uncertain what it would mean and if it would put constraints on the fund, but now it has clearly become legitimate."