Israeli and U.S. officials arrive in Abu Dhabi on historic flight from Ben-Gurion

TAGS:
A delegation of Israeli and U.S. officials arrived in the United Arab Emirates capital of Abu Dhabi on Monday afternoon on the first-ever direct commercial flight conducted by Israel's flag carrier to the Gulf state.

El Al flight LY971 took off from Ben-Gurion Airport at 11:15am, following a 45-minute delay, and soon after entered Saudi Arabian airspace after the kingdom agreed Sunday to the special request made by Israeli officials.

The delegation is meeting with UAE officials to discuss the details of the historic peace deal between the two countries announced earlier this month. Security officials have not joined the delegation, with matters concerning defense set to be discussed at a later date. 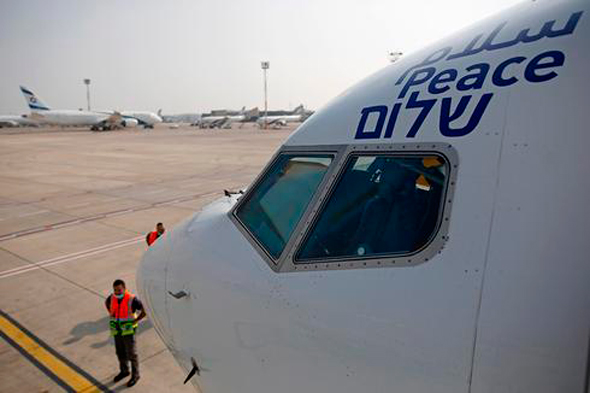 Flight LY972 will return to Israel on Tuesday. The numbers for the two flights include the UAE and Israeli international dialing codes, respectively.

The aircraft carrying the delegation to the UAE was a Boeing 737, equipped with a special missile defense system. The plane has the word "peace" written in Hebrew, Arabic and English on its front.

The plane's captain, Tal Becker, said he has not worked for several months due to the Covid-19 pandemic and received a call out of the blue asking him to prepare for the flight. He said it took about a week to get up to speed.

The 45-year veteran, who is the senior captain in El Al's 737 fleet said he never dreamed of flying to Abu Dhabi, calling it a "very special feeling."

The visit is expected to last two days and will include meetings on a variety of topics, as well as the signing of agreements on cooperation in the civic and economic field.

"I prayed yesterday at the Western Wall that Muslims and Arabs throughout the world will be watching this flight, recognizing that we are all children of God, and that the future does not have to be pre-determined by the past," Kushner, who is also president Trump’s son-in-law told reporters on the tarmac at Ben-Gurion airport.

"This morning the traditional greeting of 'go in peace' takes on a special significance for us," Ben Shabbat said before takeoff.

The Israel-UAE agreement to normalize ties was announced by Trump on August 13, making the UAE the first Gulf country and only the third Arab nation to establish relations with Israel, after Egypt and Jordan.

Earlier Monday, at least three people were killed and several others were injured in two separate explosions in Abu Dhabi and Dubai, the police and local media said. A gas cylinder exploded in a Dubai restaurant and killed one person, local media reported. In Abu Dhabi, two people died when a blast hit KFC and Hardees restaurants on the city's Rashid bin Saeed Street, the National reported, adding that other retail outlets were also damaged. It remains unclear whether the explosions on the main street leading to and from the airport had any connection to the visit by Israeli and U.S. officials.