Edouard Cukierman, managing partner at Catalyst Funds and the chairman of Cukierman & Co Investment House, is convinced the relations between Israel and the UAE have a very bright future

Edouard Cukierman, managing partner at Catalyst Funds and the chairman of Cukierman & Co Investment House, returned to Israel from the UAE on Monday with a twinkle in his eye. After spending a week conducting business meetings in Dubai and Abu Dhabi, Cukierman is convinced the relations between Israel and the UAE have a very bright future following the signing of a peace agreement between the countries at the White House on Tuesday.

"They really see us as a true long-term partner," Cukierman told CTech on Tuesday. "I think that beyond the geopolitical significance, there is also the economic significance of this deal. The main sectors in which they are invested suffered from tough blows recently. Oil, air travel, tourism and real estate have all taken painful hits and they saw during the Covid-19 pandemic that there are other sectors like tech which they hadn't invested much in." Cukierman said that one of the issues that came up in almost every meeting was food security. "In their region, just like in other countries across the world who depend on imports for food supplies, they only maintain backup supplies for a month-and-a-half. The reliance on import is a problem and they made a strategic decision to build an infrastructure that will give them local food production capabilities to at least ensure that they can provide for their citizens for a longer period of time," noted Cukierman. 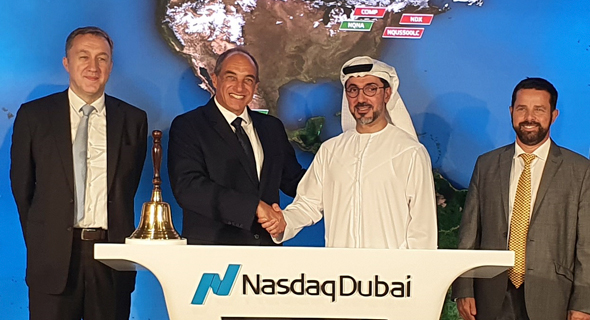 "They have a clear interest to promote their economy and they see us as the right partner," he added. "They could go to California, but that is far less accessible. We are just 3.5 hours away by plane and we have very much in common. Of course, there is the geopolitical aspect of the agreement and their relationship with the Americans, including the military relationship. There is also the joint challenge both countries face in Iran. There are many interests involved, but I think that for people in the business world the main issue is how can they leverage being the first movers. Similarly to Singapore, which sees itself as a hub to all of Asia for Israeli companies, the UAE sees itself as a hub to the entire Gulf region."

Cukierman & Co. Investment House is considered one of Israel's leaders in cross-border investments, mainly through a strong network of leading corporations, investors and financial institutions in Europe and China. The firm provides a full range of investment banking services, including mergers and acquisitions, private placement, IPOs, asset management and strategic consulting to Israeli, European and Chinese companies, and has been involved in over $7 billion in deals with the largest corporate finance team in Israel. Catalyst Funds was founded in Israel in 1999 and manages more than $300 million, supporting the long-term growth of medium-sized Israeli companies. Cukierman noted that he's looking at the Gulf region as a potential new center of activity for his company. "Their willingness to do business and the welcome we received, coupled with the affluence that exists there in many sectors means there is an opportunity to build something really meaningful," he explained. "We began our activity 27 years ago, the first 20 years focusing on Europe and in the last seven years also entering China. We are in it for the long term and we are already planning our next trip to the UAE." Cukierman noted that Israel is looked upon as a role model and a startup nation, with the UAE understanding that the era of oil will one day come to an end and that they need to use their resources to build the industries of the future. He also had some advice for Israeli companies and funds looking to do business in the UAE. "The financial activity is very centralized and they have a very top-down approach. You need to reach the people with influence from the ruling families. There are also many sovereign funds and even non-sovereign funds invest according to guidelines from the leader so you need to be very aware of what they need and want," he explained. While the visit to the UAE was a resounding success, the fact Cukierman can't currently return the hospitality due to the Covid-19 crisis in Israel is seriously dampening his excitement. "All the people we met, including some very influential people, would like to visit Israel. These are people that can make an impact, but they can't visit since Israel remains closed to foreigners," he said. "We saw in our visit to the UAE how a country safeguards its citizens' health. I underwent three tests in the UAE. I had to be tested before flying out. I was given another test when I arrived in Dubai and had to do another test when I traveled from Dubai to Abu Dhabi, which is a drive of an hour-and-a-half, and another one before I flew back. There are ways to deal with the pandemic. We received such a warm welcome and there is a willingness to create strategic partnerships, but we can't even host them here and that is absurd. There is no one in the Israeli government to talk to as this isn't on their priority list. This isn't a political issue and is completely about economics. This means nothing to the politicians and it really angers me that we find ourselves in a situation in which we are given an amazing welcome but we can't return it and interest them in investments in Israel."
Buzz