Only essential factories and services will be able to continue operating during the closure. Outdoor prayer services and protests, two hot-button issues dominating the country these days, will be limited to groups of up to 20 people and can be held within only 1 kilometer from home

Israel will enter a full lockdown in an attempt to stem the Covid-19 outbreak in the country beginning from this coming Friday until after the Jewish holiday season in mid-October, the government decided early Thursday morning.

According to the outline that was brought before the government, only essential factories and services will be able to continue operating during the closure. Outdoor prayer services and protests, two hot-button issues dominating the country these days, will be limited to groups of up to 20 people and can be held within only 1 kilometer from home. Synagogues will only be open on Yom Kippur, the Jewish Day of Atonement, and subject to the government's health directives. Public transport is set to be limited to a minimum while Ben Gurion Airport will only be open to incoming flights and emergency outgoing flights. The cost of the lockdown for the local economy is estimated to be in the region of NIS 35 billion (approximately $10 billion). 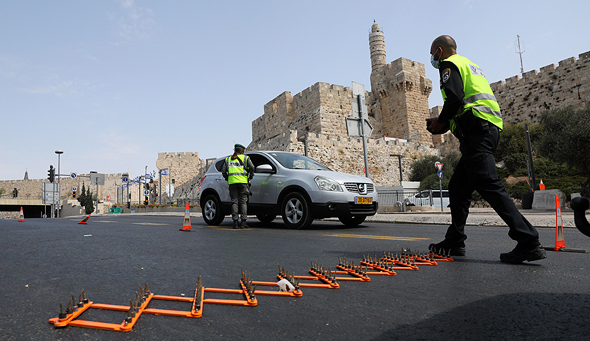 Israel will enter a lockdown starting from this Friday. Photo: EPA

The decision was made in an alternative cabinet composed of Prime Minister Benjamin Netanyahu, Defense Minister Benny Gantz, Interior Minister Aryeh Deri, Foreign Minister Gabi Ashkenazi and Justice Minister Avi Nissenkorn, bypassing the coronavirus cabinet. The rest of the members of the coronavirus cabinet, which leads the government's response to the pandemic, and Attorney General Avichai Mandelblit, were only informed of the agreement after the fact.

Many pundits have claimed that the new limitations were politically motivated, with Prime Minister Benjamin Netanyhau pushing to end weekly protests against him on one hand, claiming they are a hotbed of infections, and succumbing to pressure by his ultra-Orthodox coalition partners to keep synagogues open on the other. Out of the 54,990 coronavirus tests conducted in Israel on Wednesday, 6,826, roughly one in seven, returned positive. It was the second day in a row that the number of positive tests approached the 7,000 threshold. Since the onset of the pandemic, over 200,000 Israelis have contracted the virus and more than 1,300 have passed away due to its complications. The new lockdown, the second since the initial outbreak of the pandemic in late February is expected to have dire implications for the economy, with tens of thousands of people joining the ranks of unemployed daily and businesses shutting down at an alarming pace. According to a new OECD report, the Covid-19 pandemic has thrust Israel into "a severe economic shock." In its latest Economic Survey of Israel, the OECD says government support to cushion people and businesses from income losses should continue and adapt as the health and economic situation develops. Training and job-search assistance would help those who have lost jobs to find new ones while improving education and infrastructure and boosting competition would strengthen the recovery. “The global coronavirus crisis hit just as Israel’s economy was performing well. In the 10 years since joining the OECD, Israel has halved its unemployment rate, raised living standards and reduced public debt,” said OECD Chief Economist Laurence Boone. “Israel needs to keep up its efforts to protect people and firms, revive growth and avoid the crisis aggravating key challenges of high inequalities and productivity disparities between high-tech and traditional sectors.” With uncertainty over the virus still high and global demand weak, the survey, which was published on Wednesday, projects only a gradual recovery of GDP growth to 2.9% in 2021, after a drop of 6% in 2020. Unemployment is set to remain above pre-crisis levels at the end of 2021.
Buzz