However, the arrival of the limited delivery is just the first stage on the way to the ultimate goal, which according to Minister of Science and Technology Yizhar Shai is to reach an agreement with Visby Medical to manufacture its kits in Israel. A computer engineering graduate of the Technion - Israel Institute of Technology - de la Zerda co-founded Visby in 2013 and serves as its CEO. The company had been working on developing a personal disposal PCR kit to rapidly test for various infectious diseases but said its first commercial application came about as part of the battle against the spread of Covid-19. The company has previously raised $300 million, but it only came out of stealth mode after receiving the FDA's approval. 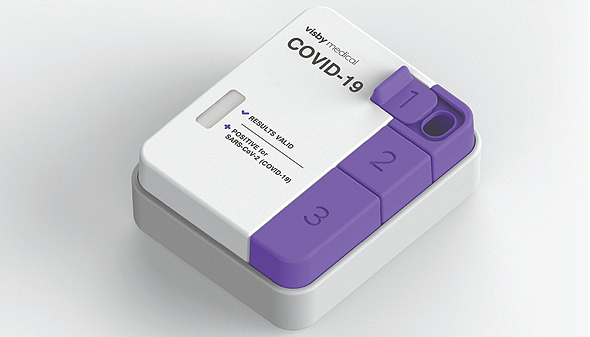 Shai told Calcalist that initial contact with the company was established four months ago through Ittai Harel, a managing partner at Pitango Venture Capital, which led Visby's series C round of funding.

"Harel told me about the company when it was still in stealth mode" said Shai. After talking with de la Zerda, Shai approached Minister of Defense Benny Gantz in order to promote a partnership with Visby. Gantz brought on board the Ministry of Defense and the Israel Institute for Biological Research, whose experts were also impressed with the new device. Even though it had yet to receive regulatory approval and was still operating in relative secrecy, Visby already had serious demand for its device at that stage. "De la Zerda asked me to present him with compelling use cases for the device which he could present to his board," said Shai. After further discussions the two selected two use cases: testing parliament members before they enter the Israeli Knesset and testing laborers at the Israel-Gaza crossing before they enter Israel for employment. Visby liked the idea and agreed to send Israel kits. "As far as I know we are the first country that will receive these kits," said Shai. "The next stage is to turn this into a big commercial partnership with the Ministry of Defense and the Ministry of Health and that is why we are already looking into additional places we would like to use these rapid tests." You have mentioned the great demand for these kits, how do you plan to ensure that Israel will have enough of these kits? "We have begun discussing the possibility of manufacturing these kits locally and are trying to reach an agreement with the company." The cost of a single kit is currently about $50, but local manufacturing is expected to reduce it significantly. Following the initial pilot with the upcoming delivery of several hundreds of kits, Israel is set to receive several thousand more kits to be used per the agreement between the sides. PCR is a process of exponentially replicating DNA or RNA. It works by controlled heating or cooling of samples in the presence of specially designed enzymes, creating billions of copies of the desired genetic material. Without the replicating process, samples with a small viral load, such as those collected from an asymptomatic Covid-19 carrier, would not be detected. For that reason, PCR is considered a mandatory standard in tests meant to provide a diagnosis. It is extremely specific and sensitive and therefore provides the best chances of detecting the pathogen.