TAGS:
The gap in the polls between Joe Biden and Donald Trump continues to grow. Despite the U.S. President's apparent swift recovery from Covid-19, Biden holds an advantage of 51.9% to Trump's 42.1% according to the latest RealClear Politics average of national polls. On the same date four years ago, Hillary Clinton had a lead of 44.8% to 39.8%. But the numbers aren’t that significant. The polling fiasco of 2016 only increased the concern regarding the attempt to predict the political future in the U.S., as well as that of financial markets, according to polls. Wall Street has already decided that these numbers are insignificant. In theory, markets are supposed to suffer during a week in which the Democrat nominee has seen his chances increase. After all, Democrats traditionally like to increase taxes, make life difficult for oil companies and generally be less accommodating for the business sector. Nevertheless, Nasdaq climbed 4.6% last week in one of its best weeks since July while the S&P 500 jumped 3.9%. This time the rise wasn't only enjoyed by tech stocks, with the Dow Jones even climbing 3.3% and moving into the green for 2020. 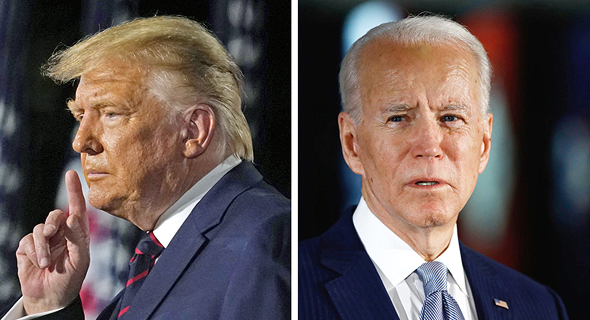 U.S. President Donald Trump (left) and Democratic Party presidential candidate Joe Biden. Photo: Reuters and AP
The reason is the increasing understanding that the Covid-19 crisis and its economic implications are blurring the classic differences between a Republican and Democrat president. Both Biden and Trump will have to approve an additional incentive package to kickstart the American economy. The gap between the parties currently stands at $400 billion. The Republicans raised their offer to $1.8 trillion while the Democrats are targeting $2.2 trillion. The markets are internalizing that the compromise will be in the region of $2 trillion. Until the fires started by coronavirus are put out, taxes aren't expected to become a top priority, which again means there isn't much of a difference between Trump and Biden. The differences in approach are only set to surface once the economy begins to recover. Nevertheless, most countries that are dealing with the economic crisis are creating deficits that will need to be covered, likely from taxes. Therefore, current estimates are that the Republicans won't be able to act the way Trump did at the start of his presidency when he cut the corporate tax rate from 35% to 21%. Biden's plan to increase the rate to 28% is also likely to change, with the next president having to balance between their policy and the economy's delicate and complex situation,

One scenario which is really frightening the markets is the lack of a clear-cut result on November 3rd. Trump has hinted that he may not accept the results of the elections, an exceptional comment that is raising fears in the U.S. Following the unequivocal results in the race between George W. Bush and Al Gore in the 2000 elections, the S&P 500 fell by 10% over a three week period and created an anxious market, and that was even without Trump’s unconventional character playing a role.

If 2020 taught investors something it is that nothing goes according to expectations. Therefore, there is no point in trying to guess who will win and coming up with an investing strategy accordingly. The element that will end the volatility, and will also allow investors to select their strategy, is an effective Covid-19 vaccine. Until then, even U.S. presidential elections are no more than background noise.
Buzz