TAGS:
Images of synagogues crowded with worshippers during last month’s Jewish High Holidays had health professionals and public officials warning of the catastrophic results from the potential super-spreaders events. But for one Israeli pharmaceutical company, the close-contact indoor gatherings provided an opportunity to test out its coronavirus-battling treatment. While the route toward producing a vaccine to the coronavirus (Covid-19) is still unclear, Israel-based Nasus Pharma is working on a nasal spray device to halt the spread of the disease. Currently, the company is still testing the treatment, most recently on a group of worshippers in the central city of Bnei Brak, over the Rosh Hashanah holiday last month. 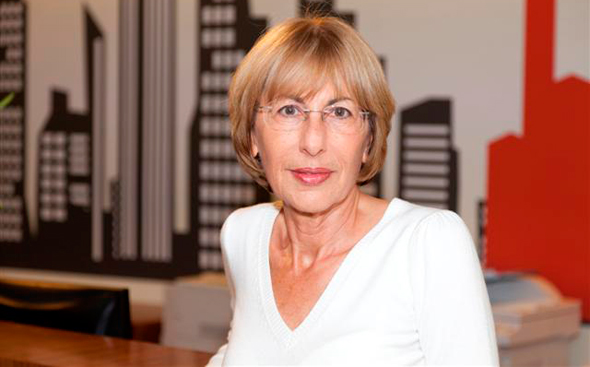 Nasus Pharma CEO Dr. Dalia Megiddo. Photo: Nasus Pharma
Taffix, is a powder-based nasal spray (PBI) that is administered to the nose, and blocks viruses from entering the nasal passages, preventing an infection. It isn’t a cure, however, merely a precaution offered to those in close-knit communities with high rates of infection, or to people at risk, such as the elderly and those with underlying conditions such as diabetes or chronic lung diseases like asthma.

“We know that most diseases affect people by entering the nasal passages,” Dr. Dalia Megiddo, CEO of Nasus Pharma, said during an interview with CTech. She explained that upon the outbreak of Covid-19 last year, Chinese doctors began taking samples from patients’ blood, nasal passages, and mucous, and found that the highest concentration of viruses was found in the nasal passages. Scientific journals published articles based on research that detailed the easiest way for the virus to enter and connect to cell receptors was in the nose, where they have the highest amount of concentration.

For the past three years, Nasus Pharma has been concentrating on treating outbreaks during emergency situations that require a fast response, such as in the case of patients who go into anaphylactic shock or opioid overdose, by developing other nasal spray devices that are released into the body as soon as possible. With the outbreak of the coronavirus, Megiddo said that the company began looking for new ways to protect those fragile cells from the invading virus, and created Taffix. 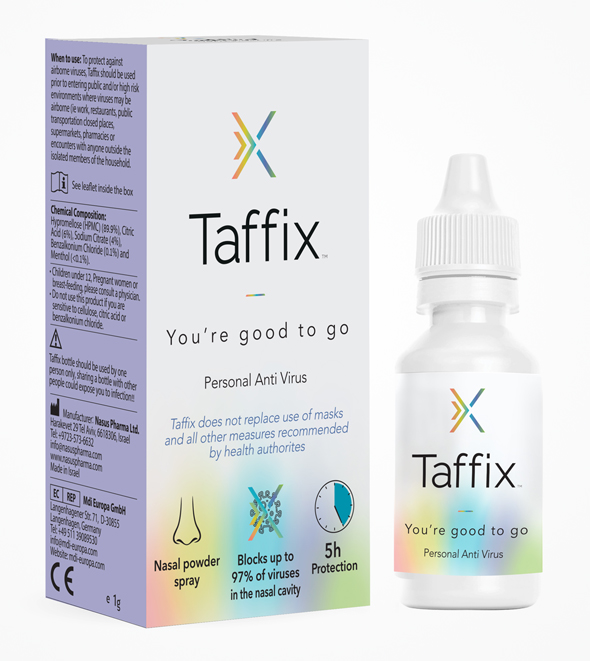 “This is a medical device but it is not a drug,” she reiterated, “because it does not contain any active ingredients. “The mechanism of action is not specific for the treatment of covid,” she said, and can be used for limiting the spread of influenza as well. “Taffix is a powder that when it is inhaled covers the nasal passages to create a protective layer around the cells so that the virus cannot reach the receptors cells in the nose.”

Taffix needs to be used every five hours, particularly before one encounters a populated area, such as a supermarket or park.

The spray has two mechanisms, she explained. While the first is mechanical – the powder that is sprayed turns into a gel-like consistency that covers the nasal passages, by absorbing water from the nose. This micro-gel coats the nasal passages and acts as a protective barrier against incoming viruses. Additionally, she noted that the gel is acidic and viruses cannot survive in an acidic environment.

“It is an extra precaution, but it does not replace masks or any recommendation from the Health Ministry. Even with all the cautionary measures we are now taking, we are not 100% protected,” she noted.

The group started with a laboratory study, where they simulated what happens in the nose, by first spraying the powder in a closed area, and then spraying various types of viruses over them. “Our results consistently showed that the virus cannot penetrate the gel, leading to a disinfecting grade of between 97%-99%.” She noted that this simply provides an extra layer of protection in the most vulnerable part of the human body.

As most people are concerned with the outbreak of the virus in Israel, certain communities are at a much higher risk, she elaborated. “Bnei Brak has 27,000 people per every 12 km, which is a very high density rate – twice the rate in Gaza and three times the rate in Tel Aviv.” Even if people do take extra precautions, they can still get infected because the virus is present.

Prior to the Rosh Hashanah holiday, Nasus Pharma offered to test their device in one community with a very high concentration of virus carriers. In the study, the synagogue was divided into capsules and congregants sat behind plastic dividers and wore masks. A population of 243 people were present, where a third took the drugs as administered, while two-thirds did not. After a period of two weeks, in which that same one third continued to take the drug (some 83 people), only two were infected. The two infected individuals did not take the spray three times a day, as recommended. However, of the 160 non-users, the rate of infection was 16 persons 10%), and that was significant. 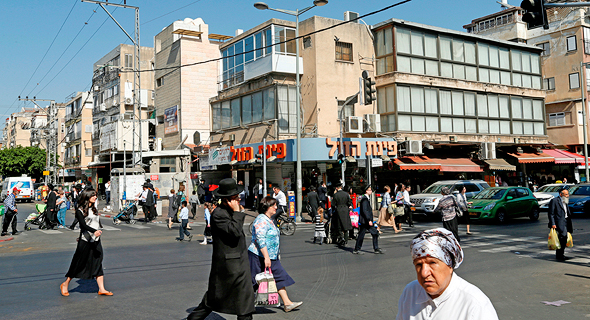 A busy street in the city of Bnei Brak. Photo: Amit Shaal

“This is not a clinical study but a user survey” she reiterated and noted that Taffix has been approved in Europe, the Dominican Republic, and in Israel. “We are currently developing additional clinical information. This is a user survey and brings critical information to us, but it is not the end of development,” she explained.

“We are continuing to look at other populations as well. There are a number of other circumstances with which this spray can be administered and protect people,” she added. The company hopes to test this drug in future instances, specifically during a SARS (Severe Acute Respiratory Syndrome) outbreak.

While ethical questions may be raised such as how the company is able to justify using a drug on a designated group of people by exposing them to promote “herd immunity,” the company reiterated that the product had been approved by other countries, prior to the holiday.