Delivery drones edging closer to becoming a reality in Israel

TAGS:
The pilot for a national network of delivery drones in Israel continues to expand, with the Ziv Medical Center is Safed recently becoming the latest health organization to use UAVs for deliveries within its premises. The pilot began at the Dorot Geriatric Center in Netanya several months ago and the drones will be used at the Ziv Medical Center to deliver medicine and test kits within its complex, reducing, as a result, the contact between people, and the workload on the hospital’s manpower, as well as accelerating the time of delivery. The main goal of the pilot is to allow the state to test out the regulation it is currently creating for the sector as part of the pilot programs for testing and demonstrating drone technologies in managed airspace (UTM). 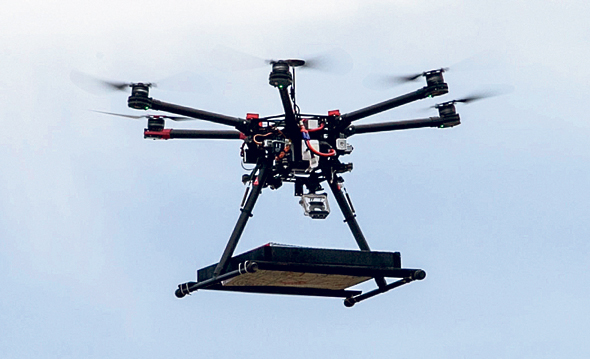 A delivery drone. Photo: Ohad Zwigenberg
Israel's Ministry of Transport (MOT), Ayalon Highways, the Civil Aviation Authority of Israel (CAAI), C4IR Israel at the Israel Innovation Authority, and the Fuel Choices and Smart Mobility Initiative have collaborated on the program that is intended for Israeli technology companies in the fields of drone operation, drone control and monitoring, as well as technologies designed to locate and manage drone networks intended for operation in urban environment. One of the state's demands from the companies participating in the program is to have the ability to cope with one of the increasing threats in the drone sector: the disruption of GPS signals which drones depend on in their navigation. "This is a very well known problem to armies across the world and could also endanger big investments in the civilian sector," said Yaki Baranes, who heads Baker Tilly's strategy and management consulting division, which recently advised several companies regarding the worthwhileness of operating drones in the civilian space. GPS disruptions are split into two groups: the jamming of satellite signals, and spoofing, in which fake signals are sent to the drone. Spoofing already became prevalent in 2016 when augmented reality mobile game Pokemon Go was growing in popularity and players used spoofing to send other players in the wrong direction. "Transmitters that were bought on eBay or constructed at home have managed to disrupt the activity of critical infrastructures like airports," added Baranes. "It is estimated that there are hundreds of spoofing attacks a day conducted by criminal and terrorist groups. It is also possible to take control of a civilian drone and land it in order to steal its cargo or to cause it to crash on purpose in order to endanger human lives."

Unlike military or recreational drones, autonomous delivery drones aren't controlled by humans at all times. Disrupting their GPS reception could cause them to lose their way and crash into a dense urban area. The goal is that in the case of a loss of signal the drone will automatically return to its launch site, or land at predetermined points along its route. However, in the case of a spoofing attack, the drone may not recognize that it has lost its way and could continue to fly according to its new instructions.

There are several companies that currently offer anti-jamming systems in the defense sector, but these are expensive and aren't suitable for civilian and commercial activity. "The sector of protecting civilian drones from disruptions is in its infancy and will grow together with the regulation in the space," added Baranes.