Pollution clogging up the oceans? Plastic-eating enzymes to the rescue

“We still have time to save the world,” says Prof. John McGeehan who discovered a super-enzyme capable of breaking down plastic waste at garbage dumps

TAGS:
Loscenteier is a secluded beach on the Scottish island of Harris, a quiet picturesque place. One day in November 2019 it made headlines for tragic reasons. A sperm whale’s carcass, weighing some 20 tons, and 15 meters (16 yards) long was found on its shores. The deceased whale was swept to shore, where rescue workers uncovered 100 kg (200 pounds) of plastic garbage in its abdomen. “The waste created a giant hole in its stomach,” explained the Scottish Marine Animal Stranding Scheme, an environmental group. “Some of the contents included plastic netting, strips, gloves, bags, cups, and straws.” The young whale, who was estimated to be around 10 years old, isn’t the first and certainly won’t be the last victim of marine pollution. A conservative estimate says there are 14 million tons of microplastic covering the ocean floor, accounting for over 80% of marine waste that causes serious damages, worth $75 million annually in GDP. The pollution leads to massive deaths of sea turtles and marine mammals, damages hundreds of ecosystems, and even affects the fish that we eat. According to a recent report by Frontiers in Marine Science, at the current rate worldwide marine pollution will triple by 2030. 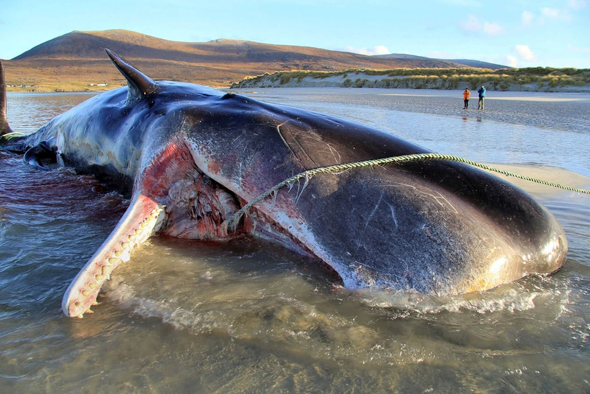 However, there is some encouraging news. As Scottish rescue workers brought the beached whale to shore, on the other side of the United Kingdom a scientist was set to publish a discovery that could solve the world’s waste problem. Prof. Joe McGeehan, who specializes in structural biology at the University of Portsmouth, created an enzyme cocktail that is capable of breaking down plastic into smaller components of oil and gas, all at an incredibly fast rate and without artificial intervention. “We still have time to save the world, if we can unite countries to address the issue of plastic pollution,” he said in an interview to Calcalist. “We already have the technology, and that’s why I’m optimistic. I have to be.”

Finding a miracle in a landfill McGeehan’s revolutionary idea came to him after he heard about researchers who visited a landfill in Japan. In March 2016, he read an article in the “Science” journal written by researchers at the Kyoto Institute of Technology and Kyushu University whose headline read “Some bacteria think plastic is fantastic.” The authors dove under giant garbage dumps, and surprisingly discovered a bacterium that feeds off PET plastic, which most soft drink bottles are made of. “They took samples to see whether the bacterium could be regrown in a lab and fed plastic,” McGeehan explained. “In these dumps, bacteria typically begin to grow on plastic bottles due to leftover sugar residue from soft drinks which it feeds off of and other organic matter.” Surprisingly, the bacterium - which was named Ideonella sakaiensis - actually chewed up the plastic. “The fact that this bacterium is able to nourish itself with something no other creature in nature is capable of is astounding,” he said. “Think about it: plastic has been in use for the past 50 years.” In other words, within 50 years a new bacterium has formed that survives off of an industrial product. “This is a very short time for the development of a food chain, it really is evolution in real time.” Immediately, McGeehan emailed his colleague across the sea, Dr. Gregg Beckham at the National Renewable Energy Laboratory in Colorado, and discovered that he, too, had read the article and fallen off his chair in excitement. The pair decided to collaborate and take the research one step further. “Even though we didn’t have a budget, we decided to put together our teams for collaborative research, because this opportunity was too exciting to miss out on,” he reminisced with a smile. “You could say it was a good decision.” McGeehan and his colleagues examined PETase, an enzyme that helps create the bacterium that breaks down plastic. In an attempt to trace its evolutionary origins, the team succeeded in accurately mapping its structure and its active site (the area of an enzyme that binds to a substrate and creates a chemical reaction which accelerates activity), and the exact position of its atoms. Despite both scientists having plenty of experience in similar research, they found their answer where they least expected it: by altering the structure of the enzyme’s active site and making it resemble other enzymes, they created a mutation of the enzyme that efficiently breaks down plastic at a rate 20% higher than the original version. “Imagine loops that are connected to one another, and suddenly you take a pair of scissors and cut the strands linking them - that’s how enzymes work,” explained McGeehan. “That is how the enzyme releases its original structure. It’s really cool.” And that was only the first step. 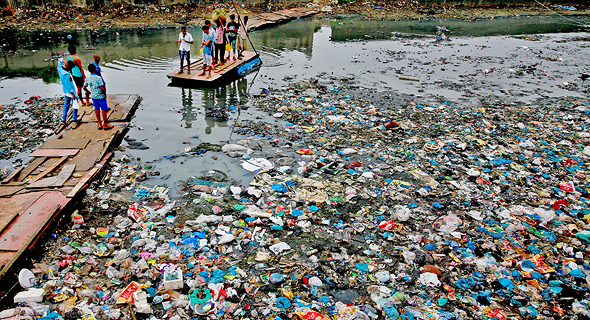 Large amounts of hazardous microplastics pollute the Indian Ocean. Photo: Getty Images
The sensational discovery, which was published in the prestigious scientific journal PNAS and reviewed around the world, granted McGeehan and his colleagues GBP 5.8 million for further experimentation from Research England, a government fund. McGeehan used the funds to establish the Center for Innovative Enzymes, or CIE at the University of Portsmouth, which employs 30 scientists, while Beckham was appointed the CEO of BOTTLE, a U.S. consortium. The two continued to mix enzyme cocktails until they created a super-enzyme that breaks down plastic at an accelerated rate - six times faster than the original enzyme which the Japanese researchers discovered. This time, news of the super-enzyme made loud headlines worldwide. “If last time, the news reached 200 million people, this time we reached 10 times more,” he said. “It’s insane.” “Our discovery is a big step forward,” he said and explained that it has even greater potential. “Now, the super-enzyme can break down plastic within a few weeks, and if we can further accelerate the process every year, we’ll be able to whittle it down to a few hours.” A groundbreaking solution for breaking down plastic McGeehan, 49, was born in the town of Largs, Scotland, and speaks passionately about protecting the environment - so much so that he bumbles his words. He’s been passionate about the subject since childhood. “As a boy, I loved to surf near the cliffs of the Mull of Kintyre,” he said, “even back then, 30 years ago, I remember that I found pieces of plastic in the water. The amount of plastic in the oceans has probably grown exponentially since then.” McGeehan holds a bachelor’s degree in microbiology and a doctorate in virology from the University of Glasgow. During the last few years, he worked as a laboratory manager at the University of Portsmouth, in southern England. For many years he has been working tirelessly to find green energy solutions. Before the discovery of Ideonella sakaiensis, McGeehan tried tracking down other enzymes that break down wood into sugars which can be fermented and later transformed into bioethanol (a clean commercial fuel). The super-enzyme has revolutionary potential since it is doubly-effective: it breaks down plastic waste into oil and gas and creates energy. Breaking down plastic could be used to create higher quality recycled versions, he explained. “If you burn a plastic bottle, the flame creates a lot of energy. Currently, we’re just throwing away that energy, which is bad. Our enzyme can break down plastic into its core components, namely oil and gas. If we can purify them, then we can keep producing high-quality versions of recycled plastic an infinite number of times.” 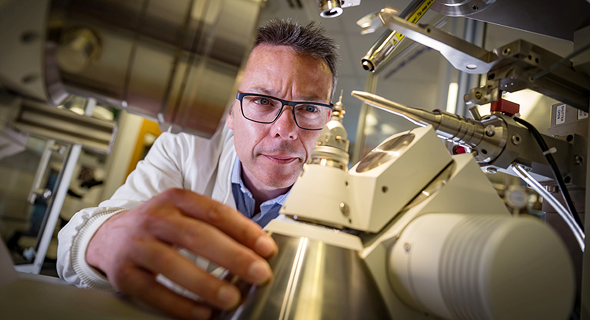 Prof. Joe McGeehan is working to find a solution to reduce ocean pollution
So, what’s wrong with current recycling practices? “Currently, only 9% of plastic waste is recycled, but existing processes aren’t economically practical. Oil and gas are cheap, and that’s why making byproducts from them is cheap, while producing recycled plastic is very expensive and of poor quality. The super-enzyme’s decomposition of plastic can lower the cost of the raw materials, and drive more people to recycle. Most worldwide companies prefer to use recycled packaging since there’s a demand from consumers, and it’s only a matter of time before legislation is passed on this subject. My mission as a scientist is to produce fast-acting cheap enzymes that can make this a reality.” How long will it take to market the super-enzyme? “A year or two, but it depends on how many people we can recruit to our side. We aren’t looking to commercialize the development ourselves, and prefer that others take care of that. For example, gas and oil companies have the facilities, manpower, and technology needed for the mission and on a wide scale. If they join us, the process will go a lot faster.” “The last paper we published was signed by 20 scientists from five different academic institutions,” McGeehan explained. “Although we’ve led the latest developments, it’s largely a group effort of a few teams around the world, a fact that I’m proud of. Gregg and I agree that this problem is too big to solve alone, and we must unite the environmental community to do so, and work closely with industrial facilities to create real solutions.” In the meantime, they strive to provide complete transparency about their discoveries. That’s why their article in the PNAS journal included a 40-page guide, a type of open-source code that included precise instructions on how to break down plastic using enzymes “so that everyone can take part and do some science, that’s important to us,” he said. Looking for talented bacteria strains So what’s next? McGeehan is continuing with his efforts to accelerate the rate of the super-enzyme, which could help alleviate ocean pollution. “It does work in water, but to make it work efficiently it has to be used within a recycling facility. It would not work in the open ocean as it would be too diluted,” he said. But the research team isn’t content with simply looking to create a better version of the super-enzyme, and is looking for other solutions at landfills and recycling plants as well, in the hopes of finding versions that work similarly on different types of plastic. “There is evidence in nature that natural enzymes can break up polyurethane, the substance from which nylon and propylene are made from, and products such as plastic chairs,” he said. In the future, an assortment of enzymes could be used to eliminate the need to sort through waste. A bunch of enzymes could be simply thrown into recycling facilities and take care of the rest. “The Brits are very bad at recycling,” he admits with a smile. “We have 20 different recycling schemes, and people just put things in the wrong places.”
Buzz