First-place in the competition, which calls on students to invent innovative solutions for common health issues, went to Alon Rabinovitch, a PhD student at Tel Aviv University who developed a way to digitally treat hearing problems. According to his study, one in five people need the assistance of a hearing aid but aren’t aware of it. In his design, he developed an algorithm that can be embedded in a microphone system and placed inside a hearing aid. People often have trouble processing audio, and the algorithm helps quickly process audio in real time, and improve sound on hearing aid devices, perfecting both the accuracy of the sound as well as the ability to differentiate between frequencies. 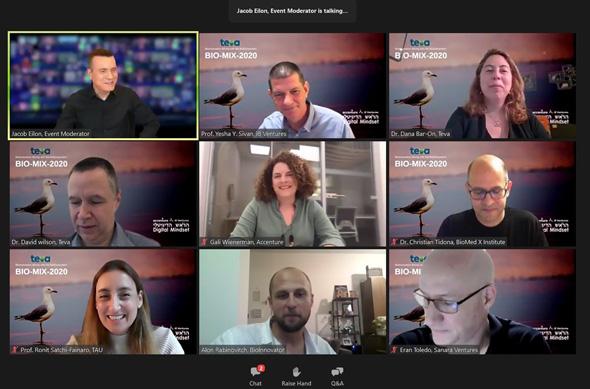 Students and judges participate in the virtual competition during a Zoom session. Photo: Teva
An additional prize, selected by the audience, went to Noa Mandelbaum, a PhD student at the Technion Israel Institute of Technology, who developed an app to help women track their ovulation cycle, by using a sensor placed on the skin in sticker form to track the presence of LH hormones, and predict the beginning of a cycle. At the onset, users will receive a notification through their cell phones. Three additional projects impressed the judges, among them a group of students who offered a way to treat early onset Alzheimer’s disease, a neurodegenerative brain disorder, by enacting preventive measures to combat the virus early-on. Another group suggested a unique healthy diet, with particular attention to promoting healthy gut bacteria, which can positively affect the body’s ability to combat a wide-range of diseases, including viruses. Finally, the last group proposed a way to block virus cell “entry channels” to the brain, and suffocate violent cancer cells. Judges on the panel included senior executives from biomedical fields and Teva. The event was held virtually over Zoom due to the pandemic.