Meet the Israeli company that is revolutionizing Disney’s streaming distribution

The entertainment giant will use technology developed by Qwilt to improve its streaming quality and free up bandwidth; Qwilt CEO calls the deal a “significant breakthrough”

The video streaming industry has famously flourished during the Covid-19 era with Neilsen figures indicating an 85% leap in the number of users and a 60% increase in the number of total hours streamed since March. The revolution taking place in the broadcast world is just getting started and as lockdowns continue and movie theatres remain closed, the number of people streaming content is going to grow. More and more companies are currently choosing streaming services as their central viewing option, even at the expense of future movie theater screenings and building new media distribution and revenue models.

Israeli company Qwilt, Inc. is at the heart of that revolution, capable of significantly altering the way video reaches people’s homes. The Israeli company, which is headquartered in San Francisco, recently signed a substantial deal with media and entertainment giant Disney, which will use its software solution to transfer video and improve its VOD and live broadcast continuity. Qwilt’s technology will be integrated into the Disney+ streaming service, which was launched last year and already boasts more than 75 million subscribers worldwide. Disney’s streaming service, which is considered the biggest competitor to Netflix, includes content by the likes of Marvel, Pixar, Star Wars, X-Men, and The Simpsons. 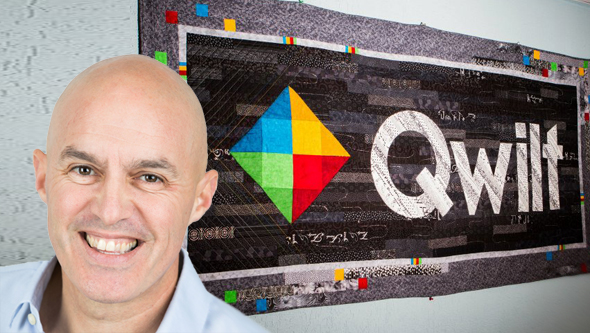 Qwilt CEO Alon Maor. Photo: Maya Amdo/Qwilt
“Disney is responsible for 60% of the global content and in the wake of Covid-19 Disney+ is its main tool to provide the content to the viewers,” Qwilt co- founder and CEO Alon Maor said in an interview with Calcalist. “We are seeing a significant increase in use particularly on days that new episodes of popular series like The Mandalorian are released. There is massive demand during those hours, which is when our solution becomes most significant. Our technology enables any online service provider to become a video provider independently of companies like Akamai. British Telecom, Verizon, and other communication companies are also currently using our technology.” Maor stressed that his company is not solely committed to Disney and is able to collaborate with any streaming service in the world. Netflix may have its own tailored platform, but there remain many big players like Amazon, Apple, and HBO who are Qwilt’s potential clients. The solution provided by Qwilt is part of a widescale collaboration agreement the company recently signed with tech giant Cisco. A second major client is British Telecom. Disney is estimated to spend more than $100 million a year on services like the ones Qwilt provides and the current agreement with them is expected to yield Qwilt tens of millions of dollars in revenue a year. Maor founded Qwilt in 2010 together with Dan Sahar, Giora Yaron, and Yuval Shahar, who serves as its chairman of the board. The company has raised a total of $100 million to date and among its investors are Cisco Investments, Tal Barnoach’s Disruptive, Innovation Endeavors, Accel, Bessemer Venture Partners, and Marker LLC. The company employs 120 people in offices in Israel, the U.S., Europe, Australia, and Dubai. The most popular method of transferring content nowadays is through a geographically distributed network of proxy servers and their data centers called content delivery network (CDN). The Israeli company’s technology, combined with the partnerships with giants such as Cisco and BT, presents a threat to the technology that dominates a market worth tens of billions of dollars. Qwilt’s solution employs algorithms to monitor the network for video traffic, identifies the most popular titles, stores those titles locally, and delivers content to subscribers in close proximity without having to repeatedly fetch it from either origin sites or remote CDN nodes. The result is a significantly improved viewing experience. The software is managed on the cloud and can work anywhere in the world by embedding it in existing infrastructure. At a panel organized by the international Streaming Video Alliance, of which Qwilt is one of the founders, Michael Fay, VP of media distribution at Disney Streaming Services, said: “In addition to having the best content, we at Disney are committed to providing our clients with the best continuous viewing experience. The demand for video content, especially over the recent period, has grown at a dizzying pace and we predict it will grow tenfold in the next two years. Qwilt and it’s technology provide a breakthrough in a market that hasn’t changed in more than 20 years,” Fay said. Other participants in the panel included senior executives from Qwilt, Cisco, Verizon, and BT, who met to discuss the future of the global streaming industry. The move is expected to impact content creators and ISPs, and end-users. The content producers such as Disney will enjoy higher quality and lower cost distribution, the ISPs will benefit from saved costs and a new revenue stream and the consumers will enjoy a better and smoother viewing experience.