TAGS:
Is the Tel Aviv Stock Exchange (TASE) about to get its first unicorn? Herzliya-based fintech company Nayax Ltd. is planning to go public on TASE in the second quarter of 2021 at a valuation of $1 billion, a source told Calcalist under the condition of anonymity. Jefferies Investment Banking is expected to lead the IPO, with Leader Capital Markets to represent the company in Israel. Nayax is set to stand out in TASE not just because of its valuation, but also because 100% of its shares are still held by its founders. As a result, should the IPO be a success, Israel is set to have three new billionaires in shekel terms. TASE has seen a surge of interest in tech-related IPOs over recent months, including by Aquarius Engines, which is aiming to raise $65 million at a company valuation of over $250 million, and Akopia, which is targeting just under $75 million at a valuation of $300 million. However, neither of these companies comes anywhere close to the valuation of Nayax. 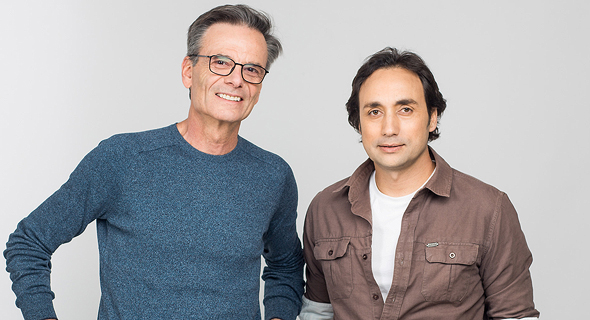 Nayax CEO Yair Nechmand (left) and CTO David Ben-Avi. Photo: Nir Selkman
While companies like IronSource, which is aiming for a valuation of up to $10 billion, still target Nasdaq for their IPOs, smaller companies which are valued at several hundred million dollars and up to $1 billion, are beginning to shift their focus to Tel Aviv, realizing that their value will not suffer as a result.

The founders of Nayax, CEO Yair Nechmad and CTO David Ben-Avi, are relatively anonymous businessmen who set up the company in 2005 in order to develop a credit-card payment solution for vending machines. Nechmad and Ben-Avi each hold 30% of the shares. The remaining 40% is held by Yair Nechmad's brother, Amir, who provided the initial funding to set up the company. Yair comes from a business background, serving as the CEO of mineral water company Mey Eden between 2000 and 2004. Ben-Avi is an experienced tech entrepreneur. Amir Nechmad is active in the U.S. real estate market and isn’t involved in the operations of Nayax. The three met when Ben-Avi hired office space for one of his startups from Amir.

Nayax currently develops cashless payment, management, and business intelligence products. The company employs 390 people, 270 of whom in Israel. In January, Nayax was on the verge of closing a $60 million round at a valuation of $400 million, but ultimately backed out. In March of this year it acquired digital payments startup Modularity Technologies Ltd., also based in Tel Aviv. Payment technology companies have been a hot trend over recent years, with one such example being Nuvei Corporation's acquisition of Teddy Sagi's payment technology company SafeCharge for $889 million in cash in May of last year. That represented a 25% premium to the London-listed company's stock at the time. SafeCharge listed in 2014 at a company valuation of $400 million. SafeCharge has a direct connection to Nayax, loaning it in the region of $25 million in February 2018. The loan was transferred to Sagi following the sale of SafeCharge and Nayax is expected to settle it after it completes the IPO. Nayax is estimated to have annual revenue of $100 million and has grown at a yearly pace of around 40% over recent years. The company is profitable and that allowed it to continue and grow without outside investments, though with the help of several loans. Nayax's business model is based on a subscription model, with clients paying a monthly fee for the products. The company's terminals support 26 different currencies in 65 countries. Nayax's solutions are installed in over 340,000 points of sale and in 2019 it facilitated over 500 million transactions.