“Israel is going back to the Moon,” announces SpaceIL co-founder

Beresheet 2, Israel’s second attempt at a lunar lander is set to launch in 2024

TAGS:
After the crash-landing of Beresheet two years ago, the Israeli space startup SpaceIL announced the newest private venture of Israel’s next Moon mission on Wednesday. “Israel is going back to the Moon,” said SpaceIL co-founder Kfir Damari during a live streamed announcement from the Israeli President’s Residence in Jerusalem. 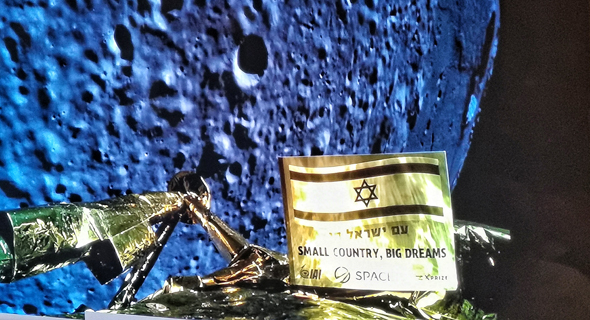 Israel will launch Beresheet 2 after its first attempt, Beresheet crashed on the Moon. Photo: IAI/SpaceIL
Under the new plan, Israel will launch a spacecraft, coined Beresheet 2 - Hebrew for Genesis - in 2024. It will be sent into space from the American space launching base in Cape Canaveral, Florida, like its predecessor. The spacecraft will be composed of three parts, an orbiter and two lunar landers which will descend on different parts on the Moon. One will remain on the Moon, and will feature an ongoing interactive program for Israeli schoolchildren, while routinely collecting data and conducting scientific experiments, while an orbiter will stay in space circling the moon for years, conducting experiments and collecting data. Beresheet 2 will weigh 630 kg (1,400 pounds), and include two lunar landers weighing 120 kg (260 pounds) each with fuel, and will be launched as additional cargo together with another satellite. Shimon Sarid, CEO of SpaceIL said that Beresheet 2 will use similar technologies to that of its predecessor. “Are we going back to the moon? Yes. Will we land on the moon again? Yes and yes,” he said. “We’ve just announced our next venture to the Moon, and I am sure it will be successful. It will allow us to conduct innovative scientific experiments and help us better understand the Universe we live in,” said Israeli President Reuven Rivlin. While lauding the lofty aspirations of the project, especially as the world battles a global pandemic, Rivlin urged people to embrace the values of scientific research and use them for earthly purposes too.”We must remind ourselves of our responsibility as humans on Earth to be responsible for the health and safety of our planet, as well as taking care of the health of all humans on Earth. This is a historic moment in the short history of the State of Israel,” he concluded. 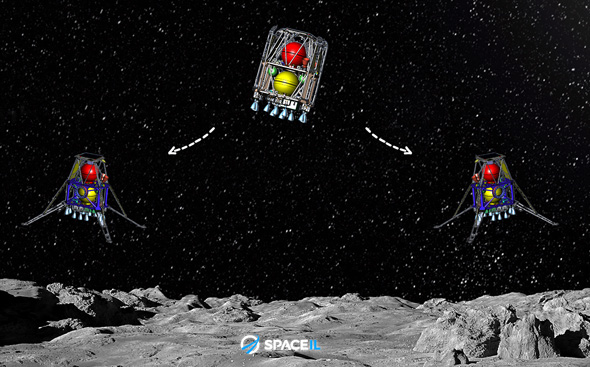 A diagram of how the alleged landers will look. Photo: SpaceIL
The spacecraft’s official plans were signed Wednesday by leading figures including SpaceIL co-founders Damari and Yariv Bash, alongside Israeli Science and Technology Minister Yizhar Shai, senior members of Israel Aerospace Industries, and other groups and sponsors.

Boaz Levy, IAI's recently appointed new CEO said that he hoped for further collaboration between space startup-SpaceIL and his company. "Together we've ignited a spark of interest in science and technology for Israeli children. IAI’s advanced technological capabilities brought Israel to its historic mission to the moon, and we are happy to join our partners SpaceIL on the next mission – Beresheet 2. IAI will continue to lead Israel’s space industry to develop new technologies based on its engineering and knowledge, its capabilities and human capital, which are the best in Israel," he said.

Shai praised SpaceIL co-founders and all of its partners. “Entrepreneurs like Kfir and Yariv know how to do amazing things. Our country was founded by people who believed they could do something, and they’ve created something out of nothing. Every high tech company in Israel was founded by entrepreneurs. We are proud to be partners of this launch of Beresheet 2,” he said, adding “we are among the 12 countries in the world who can accomplish feats such as this.” Similarly to the first attempt, the spacecraft will be designed and built by Israel Aerospace Industries, with local and international funding, including private donors such as businessman and billionaire Leonard Blavatnik. Israel is expected to partner with countries such as the United Arab Emirates, who recently launched a craft of their own to Mars, and signed a peace agreement with Israel in September. The project is estimated to cost $100 million. Turning to Israeli schoolchildren who continued to watch the speeches as they were broadcast via video, Damari said: “This mission is for you. I want to invite you to join us, and also to tell you that we’re looking to you to be the next generation of scientists and inventors. I want to tell you that despite all the difficulties and challenges, you will also continue to dare to dream,” he concluded. Udi Etsion contributed to this report.
Buzz