“When it comes to space, Israel has its own new frontiers to conquer”

Isaac Ben-Israel, head of Israel’s Cyber Center and Chairman of the Israel Space Agency shares his thoughts about cybersecurity, his predictions for the Israeli space industry, and the country’s upcoming space endeavors

TAGS:
Israel is marking many firsts in space and has new frontiers of its own left to conquer. Yet its small size and lack of large scale funding haven’t prevented its space agency from reaching for the stars. In an interview with CTech, Isaac Ben-Israel, a leading expert in the cyber and space sectors shared his thoughts about the importance of cybersecurity, the expansion of the Israeli space industry, and upcoming Israeli space endeavors.

During his long career, Ben-Israel (71) initiated the establishment of Israel National Cyber Bureau and the National Cyber Security Authority, which became the Israel National Cyber Directorate at the Prime Minister's Office. Today, he works simultaneously as Head of the Blavatnik Interdisciplinary Cyber Research Center at Tel Aviv University, where he oversees multidisciplinary research projects. He also is Chairman of the Israel Space Agency, where he is involved in the oversight of projects for Israeli space exploration as well as embarking on educational quests for Israeli schoolchildren, and collaborating with other space agencies, such as NASA, in other missions. 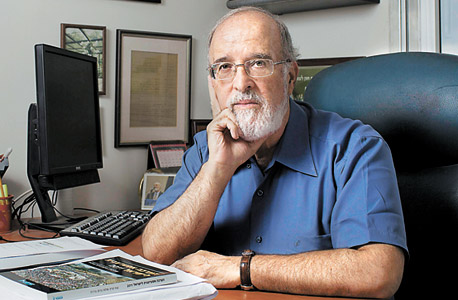 Prof. Isaac Ben-Israel who serves as the Chairman of the Israel Space Agency

You lead the Cyber Research Center in Israel; what does that entail? Do you give research grants to space-tech startups who have a proof of concept?

“At the center, we have around three hundred researchers, most from Tel Aviv University. Every year we publish a call for proposals that are judged by a global group of academics. It is open to everyone, on the condition that at least one of the researchers is a staff member of the university. So far, we’ve given grants to over 100 research topics.”

Many of those projects are on interdisciplinary topics, such as smart cities, which can only be solved by a combination of technologies. “Problems are rarely technological, and require several considerations to be taken into account, such as the psychology of individuals and social behavior, if you ignore the legal, or privacy issues, then you won’t really understand the problem,” he said.

How have cybercrime and cyber-law changed and expanded over the past few years?

“In 2010, I recommended that we form the National Cyber Bureau, which is responsible for overseeing all cybersecurity efforts, to build the necessary capabilities in Israel. Prior to that, we had some 30 years of experience in the cyber field, but it was locked behind the walls of secrecy of defense and intelligence agencies. It wasn’t a part of normal civilian life.”

Up till 2010, Ben-Israel added, no universities or educational institutions offered academic degrees in cybersecurity. Now that has all changed and the sector is seeing rapid growth. In Israel today, cybersecurity is even taught in some high schools.

He added that in 2011, the total sales of Israeli defense and cybersecurity services and products reached around $400 million a year. Last year, it crossed the $7 billion mark.

In 2014, after the exposure of the breach of privacy behind the U.S. National Security Agency, when tensions were surfacing over alleged violations to people’s privacy rights, Ben-Israel headed a government committee to set up a National Cybersecurity Authority to address the conundrum that bothered many. If governments could monitor everything on cybernetworks, it would increase the level of security but at the expense of citizen’s privacy.

“The problem remains, can you sacrifice the values of one for the other?” Ben-Israel asked.

It’s an age-old question, which continues to trouble many today. The National Cybersecurity Authority is entrusted with protecting Israel’s critical state infrastructure, its citizens, its industry, and its government organizations at the national level. Prior to that, only critical infrastructure such as power and electricity, received cyber protection, he explained.

In 2014, it became increasingly important to protect all the other systems. “I also think that it’s not healthy for a democratic country to leave this task to secret intelligence services,” he said and explained that the Israeli Shin Bet Security Agency had been in control of the country’s cybersecurity network since 2002.

Ben-Israel’s goal was to have the new body be civilian in nature and minimize violations of people’s privacy. This is made possible through artificial intelligence but requires the cooperation of citizens and according to him, should remain outside of law enforcement. Two years ago, the authority and bureau were merged into the National Cyber Directorate, which is responsible for defending Israel’s national cyberspace and for establishing and advancing Israel’s cyber power.

“For ten years, I was in charge of national defense R&D at the Ministry of Defense and oversaw satellites, missile defense, and cybersecurity projects. I think it’s important for us to realize that the more we use computers, the more possibilities we’ve unknowingly created for criminals, and the more we become dependent on computer technologies. That’s why I believe it’s very important to dedicate time and resources to this sector, for our own safety. We’re trying to function and use cybersecurity for the good of society, but criminals are using it for their own goals.”

In 2018, Netanyahu appointed him to lead a task force to make Israel one of the top five countries who lead in AI, or to be more exact secured-AI.

“It must be secured because we are transferring part of our decisions as human beings to robots, machines, and computers.”

However, due to political constraints and the lack of a budget, the government so far has not moved forward with these plans, and they remain on the back-burner. There are rampant ethical and philosophical problems as well, he noted.

Do you think that due to security concerns, Israel should establish its own space force? In the event of a potential shooting down of an Israeli communications satellite by an Iranian or other Middle Eastern threat, does Israel need to protect its interests in space?

“No. I don’t think even the U.S. should have one. Space is perhaps the last frontier in which there is no war. While there have been wars on land and sea for thousands of years, in space there is an international agreement that above 100 km, there are no national territories or combat.

He emphasized that the Outer Space Treaty is a central factor in international space law.

“Space isn’t a territory,” he clarified and recalled the joint U.S.-Russian ventures after the shut down of NASA’s space shuttle missions where U.S. astronauts would fly with their cosmonaut colleagues aboard Russian Soyuz crafts to the International Space Station (ISS).

“There’s also a difference between air space and ‘space,’” he said and gave an example of an enemy country’s aircraft flying over Tel Aviv, which would constitute a violation of Israel’s air space, and thus its territorial sovereignty compared to a foreign satellite that flies 500 km above the city, in which case there isn’t any issue with sovereignty.

He noted that though certain countries have already put weapons in space, such as China, Russia, Iran, Russia, and the U.S., “I don’t believe we need to weaponize space.”

“If we want to protect space assets, then we can use cyber technologies. All of these satellites and weapons are controlled by ground stations through communications and computers. We need a high level of cybersecurity on Earth and this will provide us with ‘insurance’ in space. I would leave it at that.”

He continues to oversee projects at the Israel Space Agency as chairman, something he has done for the past 15 years. 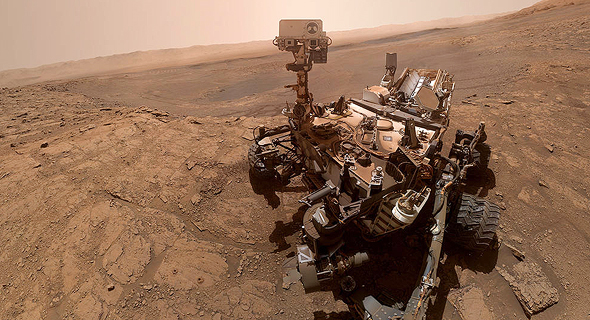 How has your time at the ISA led to the launch of the next Israeli astronaut?

“(Former Israeli astronaut) Ilan Ramon took a seat aboard NASA, while Eytan Stibbe will embark on a private sector vehicle. It’s a whole new world,” he said. “Although the Ramon Foundation and Eytan have raised the money for this mission since it is a private endeavor, there is some involvement of our agency.”

He clarified that Stibbe donated money from his own personal funds to fly aboard the SpaceX rocket next October, and bought enough cargo space aboard the vehicle to carry between 10-20 Israeli space experiments to the ISS. This is all a very big deal, he added.

What do you think is next in store for Israeli spaceflight?

“For spaceflight at least, we’d need to develop a vehicle that can take humans to space, and that is a very expensive endeavor,” he said. “Even though we've been launching satellites for 35 years. Human spaceflight is too expensive for Israel. We’d need investments in the billions of dollars. That’s the bad news. But the more technology develops and the more it becomes lightweight, the price for spaceflight will go down. Now, it stands around $50 million, but over the next decade, it could go down to around $50,000. We’re not going to direct our resources for that, but we are sending experiments along with Stibbe to the ISS.”

What are the agencies’ next goals and plans for the future?

“For the next five years, we’re focused on three main areas. One would be expanding technologies for the NewSpace sector, which is the result of technology becoming less expensive. We’d like to encourage the Israeli industry to be part of the NewSpace trend. There are around 100 satellites flying in space that have Israeli components, and that includes NASA’s Mars Curiosity rover, which has an Israeli-designed analyzer that examines rock components and was built in Kibbutz Ein Harod. We are continuing to build atomic clocks, GPS systems, and more to send aboard other satellites and missions.”

“Another mission that we’re involved in is a scientific breakthrough. Some information coming from outer space is lost in Earth’s atmosphere. For example, in a supernova explosion, some radiation that is emitted during the explosion – particularly UV rays – doesn’t reach Earth. Our terrestrial atmosphere is very effective at absorbing UV radiation. When we use a telescope on Earth to look up at the night sky, we don’t observe any of these rays. We are working on developing the ULTRASAT, a satellite that can observe UV light. We want to send it into space so that it can help scientists explore supernovas and other phenomena that can provide us with hints about the creation of our Universe.” 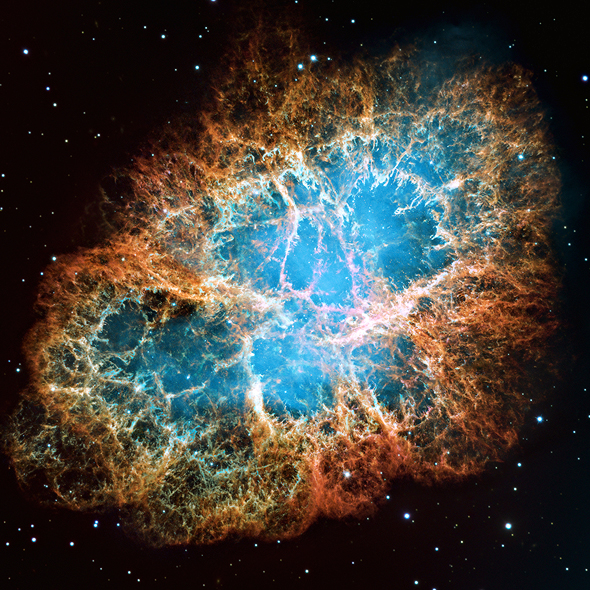 Scientists hope to use a UV telescope to further probe supernovas, such as the Crab Nebula seen here which is a supernova remnant. Photo: NASA

He noted that they’re already in the U.S. at the moment, and will be launched in a matter of weeks.

“We want young people to take space seriously,” he concluded.