Is it time to finally kill tech?

Our modern world has become so inundated with hyphenated techs that the term has become cliched, essentially meaningless

To paraphrase a famous movie villain, "when everyone is tech, no one is tech."

Health-tech, ad-tech, ag-tech, edu-tech, con-tech, no matter what they are pitching, every startup associates themselves with one, if not more '-techs', i.e., a dashtech. In some egregious situations, some companies with absolutely no technology beyond their website, still refer to themselves as a -tech. This vapor-tech compounds confusion and adds to the problem.

Dashteching isn't a new phenomenon. According to the Oxford English Dictionary, the granddaddies of this whole -tech thing, the terms high-tech and bio-tech, emerged in the late sixties and seventies respectively. By the 1980s the affix had evolved into a rampant lib fix —albeit without the zaniness of a -burger or an -o-rama — that began to be added to numerous other areas and fields.

Half a century later, our modern world has become so inundated with hyphenated techs that the term has become cliched, essentially meaningless, even as a buzzword. There seems to be no shortage of words that can be tacked on to -tech to sound impressive and yet convey little to no actual information about what it is that a company or innovation actually does. In a few instances, like techfins, the suffix has even become a prefix. 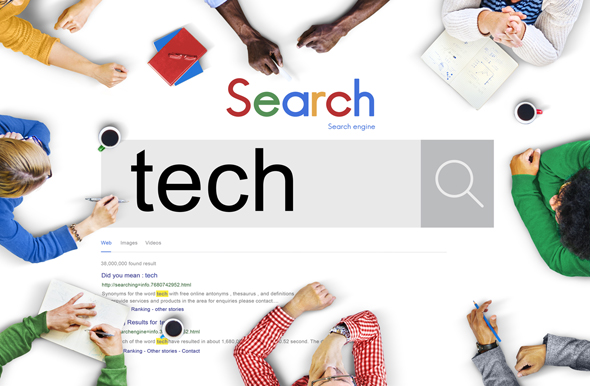 As long as it has the suffix 'tech' . Photo: Shutterstock

Given all this, some have started to question whether appending on a '-tech' is still a valuable marketing moniker; what premium, if any, are companies telegraphing by referring to themselves as tech if everything uses tech?

Technology companies can be excused somewhat from this excess. The business world has forever been involved in neologisms. The game of creating portmanteaus from heretofore unrelated words, repurposing idioms and phrases from other fields, and overusing pretentious newly discovered corporate jargon, initially popular only amongst marketing and consulting types, is now pervasive throughout the entire business world.

Nor is this grievance limited to just corporate culture. Every social and professional group has its own set of gobbledygook that they can abuse, but it is more often used internally as a way to separate the initiated from the uninitiated.

For example, I wrote an article decades ago regarding the emerging exploitation of the suffix 'ome. It was a half tongue-in-cheek analysis examining the various uses of 'ome in light of the raging popularity of the genome at the turn of the century. Twenty years later, the use of 'ome, to reference a body of biological knowledge, hasn't slowed down, with new terms still emerging. Omics is now officially considered a subfield within biology. It even has its own academic journal.

Similarly, in the American journalism sector, every scandal since Watergate, named for the hotel where the infamous break-in occurred, is a '-gate'.

And, like all libfixs, non-native speakers, or those who lack the particular cultural references, might be excluded from discussions that include -gate or other nonsensical suffixes like -o-meter or -opoli.

While this may seem like just semantics, there are real-life repercussions to overusing and abusing the dashtech taxonomy system that now seems to permeate all innovation-speak.

There are clear good reasons to use these dashtechs. Both science and law appreciate clean definitions and informative ontologies: they allow us to easily categorize the plethora of new innovations and create some semblance of order out of the chaos. Initially, the organization provided by dashteching allowed startups and established multinationals alike to signal to interested consumers, investors, and peers that they ought to be included in a particular group, whether that inclusion was related to venture capital funding or to conferences. That value seems to be waning.

Regulators as well seek to develop rules for emerging technologies, and it is useful to employ catchall terms that define broad sectors to be regulated. However, whether a particular innovation falls within the purview of one or more of those fields can have repercussions vis-à-vis how the government will view and oversee that innovation or company. The wrong label could be problematic. To wit, various patent systems similarly have a technology classification system (e.g., the European and American joint Cooperative Patent Classification system, CPC) that is employed to assign incoming patents to the correct patent examiner group (art unit). The wrong label could ultimately kill a patent.

The development of actually useful and accurate identifiers has been successful in some fields. For example, the ISO standardized Digital Object Identifier System (DOI) used primarily in academic literature has a prefix and suffix system that provides for broad categorization and more specific subcategorization.

Or, the Israeli beef system wherein each cut of meat is associated with an identifying number that consumers use when buying their desired steak.

One could imagine the dashtech system employing a similar nomenclature, wherein the prefix fintech could be followed with a complicated suffix that subcategorizes the startup as a blockchain company. Or more simply the term Fintech 3.0 could refer to all blockchain-based fintech innovations. But such systems are only valuable if they are employed consistently and correctly and provide easy clarity and organization, rather than just added confusion.

Or perhaps this is all less complicated than it seems. In paraphrasing that aforementioned villain's alter ego, tech companies just need to be true to themselves. The hardest part is simply figuring out which part of themselves to be true to.