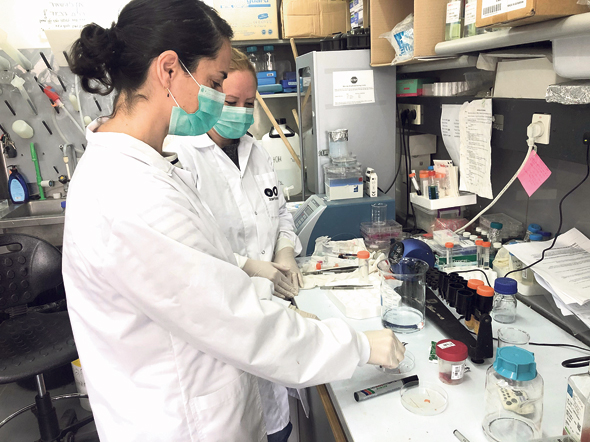 The biotechnology company Matricelf won the competition, its lab is pictured. Photo: CTech
Matricelf will receive a range of prizes, including a grant of NIS 40,000 ($12,500), an eight-month lease at Mixer’s co-working space, digital advertising on Calcalist, and assistance and consulting services from Poalim High Tech. “This is a long great journey that we’ve gone through, and if one ill person is saved by our company’s treatment, then the entire competition and award will have taken a large part in the journey,” Asaf Toker, CEO of Matricelf said. Genetika+, which developed a technology that personalizes digital health took second place in the competition. The company was awarded NIS 20,000 ($6,200), a three-month lease in the Mixer co-working space, and consulting services from Bank Hapoalim, as well as ad space on Calcalist’s website. Dr. Talia Cohen Solel, founder of the company thanked the judges and the competition for having faith in her company. Three additional companies reached the finals, including Suridata.ai, Lynx.MD, and Appwrite. Each one of the five companies who reached the finals presented their pitches to the judges. The five surpassed hundreds of other companies that applied for the contests, including 15 that reached the semi-final stage. Each company’s founder stood before two judges, who asked them tough questions demanding to understand where the company is headed, what their relative chances compared to others are, and their overall business plan, among many other factors they inquired about. The five companies, which came from a variety of local tech fields, represented young startups that haven’t had an easy time of it this past year, mainly because investors focused on more mature companies. “This is a challenging time financially-speaking, but the tech industry was successful in adapting to the new normal. In 2020, capital investments reached $9.9 billion. We are seeing a drop in the launching of new companies, and we want to be the bank that understands such companies’ needs and fortifies the industry. We are putting the young companies at the focus of this competition,’ Batsheva Moshe, Head of the Poalim High Tech Division said. No fear The winner of first place, Matricelf, which was founded in 2017 and employs seven people, is active in the field of regenerative tissue engineering based on a technology that was developed over the past few years at Tel Aviv University. The company developed a platform to create 3D printouts of otological implants of tissues and organs. The implants are built from a matrix of cells that are taken from the implantee’s body, which lowers the risk of the body rejecting the implant. The implants yielded good paraclinical results in a variety of diseases such as myocardial infarctions and Parkinson's disease. The company’s technology was used to 3D print the first artificial heart in history. The company is developing motor implants for patients who are paralyzed or have spinal cord injuries and is planning its first experiment on humans for 2023. The company’s main partner is the pharmaceutical giant Bayer, which will study new medications on human heart tissue that is 3D printed in the lab of Prof. Tal Dvir. The technology was developed in Dvir’s lab, and Matricelf was originally founded on his discoveries and owns the commercial rights to the technology. The company expects that ongoing cooperation between Bayer and Dvir’s lab, will help it continue to develop its spinal cord implants for patients who have been paralyzed in accidents.

Finding the right drugs for patients suffering from depression

Second place went to Genetika+, which was founded in 2018 by Talia Cohen and Daphna Laifenfeld, who have several years of experience in developing and selling personalized drug technologies in order to find the best treatment options for patients suffering from depression. The company's potential customers are health organizations, including hospitals, doctors, insurance companies, and sick patients, as well as pharma companies that are developing new drugs to combat depression and can take advantage of their rapid tests to speed up new medications’ clinical trials. The company employs seven people full-time and is located in Jerusalem.

Competition finalist Suridata.ai developed a system that is based on artificial intelligence from the field of natural language processing (NLP), which mimics the human ability to read and comprehend texts and their meaning. The unique technology allows organizations to easily locate, identify, and categorize sensitive information for their organizations without human interference or hand-typed processes. The system connects in a simple and seamless way to data sources in the organization, scans and analyzes the data while spotting similar sensitive information to allow the organization to control and protect its data.

Lynx.MD, which was founded in 2018 by Omer Dror, Ofir Farchy, and Dr. Robert Eisdorfer, developed a SaaS platform that allows health organizations to take advantage of the medical data it collects over time and to access it in a safe way, and while protecting patient privacy, to develop new drugs, medical devices, and diagnostic testing based on artificial intelligence. In this way, it shortens the long process for awaiting FDA approval by basing its findings on real-world evidence. The company is working on a number of different hospitals in Israel and the U.S. and is in advanced stages with additional health centers in Israel and around the world.

With its help, health organizations can share many types of data (including tabular information, such as tests and procedures, as well as videos, images, and genetic information) with external companies, while the data remains in complete control of the health agencies. The company employs 12 people today, most of whom are involved in research and development

An open-source code for organizations

Appwrite has developed a complete open-source code that is designed mainly for independent developers, but with further improvements, it plans to be available for organizational use too. The product has a following of 4,500 developers around the world and is constantly growing. The open-source code project has more than 200 code contributors, and many help to expand its knowledge base through writing posts, video tutorials, and even a book. The company completed its first financing round, was founded in 2019, has two employees, and employs additional external contractors.

The path to a successful startup

During the course of the competition, eight meetings dealing with how to found and manage a successful startup were filmed. The sessions were led by top of the line professionals and consultants from the local tech industry. The meetings dealt mainly with ways to develop a product, managing teams during the working from home era, raising capital investments, managing marketing and business development, managing a young company board, presenting a successful pitch to investors, and the financial and legal aspects of entrepreneurs at the beginning of their journey, especially during crises.