TAGS:
Israel will ban passenger flights in and out of the country from Monday evening for a week as it seeks to stop the spread of new coronavirus variants.

“Other than rare exceptions, we are closing the sky hermetically to prevent the entry of the virus variants and also to ensure that we progress quickly with our vaccination campaign,” Israeli Prime Minister Benjamin Netanyahu said in public remarks at the start of a cabinet meeting.

The ban will come into force from Monday at 2200 GMT and last until the end of January, a statement from Netanyahu’s office said. 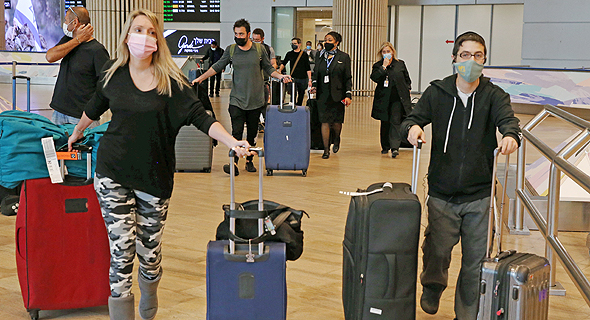 Ben-Gurion Airport. Photo: Shaul Golan
The country’s borders have largely been closed to foreigners during the pandemic, with only Israeli passport holders allowed entry. Also on Sunday, Israel expanded its rapid vaccination drive to include late teens. The vaccines were initially limited to the elderly and other high-risk categories, but are now available to anyone over 40 or - with parental permission - those between 16 and 18. The inclusion of late teens is meant “to enable their return (to school) and the orderly holding of exams,” the Education Ministry spokeswoman said. Israel awards a matriculation certificate to high school students in grades 10-12 who pass exams, administered by the Education Ministry, that play a major role in acceptance to universities. They can also affect placement in the military, where many Israelis do compulsory service after high school. Israel has the world’s fastest vaccine distribution rate. With regular imports of Pfizer Inc. vaccines, it has administered at least one dose to more than 25% of its 9 million population since Dec. 19, the Health Ministry says. The country has been under a third national lockdown since Dec. 27, which it plans to lift at the end of January. Critics say the government has mishandled the crisis, lacking a clear long-term strategy and allowing politics to cloud its decisions. Education Minister Yoav Galant, speaking on Ynet TV, said it was too early to know if schools would reopen next month.
Buzz