The January 2022 Israeli-side of the mission will be dubbed “Rakia,” after the diary of fallen astronaut Ilan Ramon written aboard the Columbia shuttle; two North American entrepreneurs to join Stibbe in flight to ISS

Israeli astronaut Eytan Stibbe and mission commander Michael López-Alegría will be joined by investor Larry Connor and philanthropist Mark Pathy when they blast off to the International Space Station as part of Axiom Space’s first manned private Low Earth Atmosphere mission, the company announced on Thursday during the concluding events of Israeli Space week at the Ramon Science Communications Conference sponsored by the Ramon Foundation and Calcalist.

The four astronauts will fly aboard the SpaceX Dragon capsule with Connor in the pilot’s seat and Stibbe and Pathy serving as mission specialists when they take off for the mission which has been pushed back from October 2021 to January 2022. 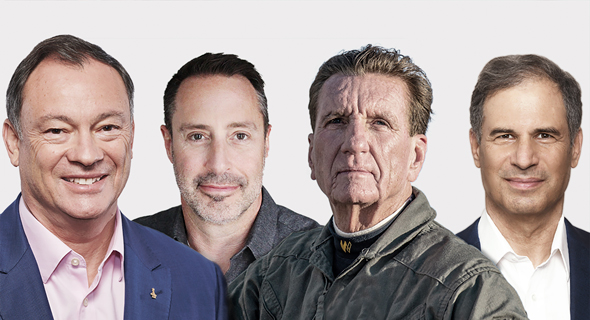 From right to left Stibbe, Connor, Pathy, and Lopez-Alegria. Photo: Axiom Space
During the concluding events of Israeli Space Week, The Israel Space Agency and the Ramon Foundation announced that the name of the Israeli part of the mission would be “Rakia,” Hebrew for sky, which appears in the Bible during the description of the second day of creation, where according to Judaism God separated the Earth from the waters and created the skies. The name was chosen by 60% of the people who voted in a Science and Technology Ministry online poll. The name of the overall mission will be Ax-1.   The name also has additional resonance with fallen Israeli astronaut Ilan Ramon, who while in space wrote a diary, where he took a line from John Lennon’s song “Imagine,” and translated it into Hebrew as “Rakia.” Later his wife, Rona published the fragments of the diary which survived the 2003 Columbia crash tragedy, with the title “Above us only skies” or “Rakia.” They have been on display at the Israel Museum in Jerusalem since 2008, after forensic researchers restored pieces using technological methods similar to those used to recover the Dead Sea Scrolls. “I want to encourage children to dream big and far,” Stibbe told crowds via a livestream “to work together, and by doing so bring our hearts closer to the cosmic bodies.” He announced a competition for teachers, where he will choose four lesson plans that he will conduct in Hebrew from the ISS. Earlier, during the initial announcement at the President’s Residence in November, Stibbe told crowds,“I am excited but also afraid, yet we learn to deal with that fear through preparation for the mission.” He will spend 200 hours or 10 days aboard the station, conducting experiments from blue-and-white companies, advancing the Israeli space tech sector. “This collection of pioneers – the first space crew of its kind – represents a defining moment in humanity’s eternal pursuit of exploration and progress,” López-Alegría said. “I know from firsthand experience that what humans encounter in space is profound and propels them to make more meaningful contributions on Earth.”

The Israeli part of the mission will be coined "Rakia" or skies in Hebrew. Photo: Brave Branding
Former NASA astronaut Peggy Whitson will serve as the mission’s backup commander, while John Shoffner will be the backup mission pilot, and are set to undergo the entire course of training under Axiom to be ready in case of any mishaps prior to the flight. Connor, an American entrepreneur, has founded and led organizations in the real estate, fintech, and non-profit sectors, and will collaborate with the Mayo Clinic and Cleveland Clinic on research projects in health once onboard. He will also host lectures to students at a college in his hometown, the Dayton Early College Academy. Pathy will collaborate with the Canadian Space Agency as well as the Montreal Children’s Hospital, to conduct health-related research projects too. Stibbe will be collaborating with the Israel Space Agency and the Science and Technology Ministry and donating his flight hours for educational outreach and scientific projects on behalf of the Ramon Foundation, who is sponsoring his mission, although he is paying out of pocket the $50 million sum for his flight seat. “We sought to put together a crew for this historic mission that had demonstrated a lifelong commitment to improving the lives of the people on Earth, and I’m glad to say we’ve done that with this group,” Axiom Space President & CEO Michael Suffredini said, noting this will be the first of many missions to the ISS. Axiom Space is the commercial space industry’s only full-service orbital mission provider for private and international astronauts, and provides training, transportation, mission planning, hardware development, life support, medical support, crew provisions, safety and hardware certifications, on-orbit operations, and overall mission management. It also has plans in the works to construct the first private international space station and make it operational by 2025.