Even without earnings, BladeRanger is the stuff of dreams for investors

The Israeli company develops robots to clean solar panels and is only expected to begin yielding revenue in 2022, but its stock leapt by 156% since its December IPO

TAGS:
Since its stock shares first began trading on the Tel Aviv Stock Exchange (TASE) on Dec. 10, 2020, the market value of BladeRanger, which develops robots to autonomously clean solar panels, has surged by 156%. Only one company issued in Tel Aviv last year yielded a higher return - Doral Energy, which rose by 208%, although it held a six month lead over BladeRanger, since it was issued in June 2020. BladeRanger’s honeymoon as a public company, which lasted for 36 trading days to be exact, yielded investors an average daily return of 4.3%. This fact has turned Blade into one of the hottest IPOs of 2020. Those astounding figures are even more surprising when considering the fact that the company still doesn’t have any revenue, and isn’t expected to throughout 2021 and has a “Going concern” note tacked on to its recent reports. 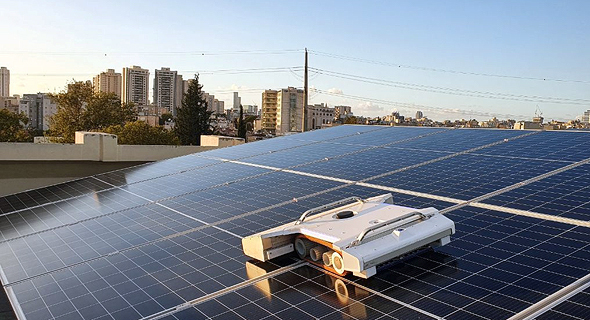 BladeRanger, whose stock market graph resembles a long-necked swan, was only recently an ugly duckling. In its latest financial reports, prior to going public, the company’s auditors noted significant skepticism about whether the business would remain alive. Raising NIS 22.6 million ($6.9 million) in its IPO brought BladeRanger back to life.

The investments made during 2018-2019 were made at a valuation of between $9.5-$11.6 million, but when Israeli construction company Shikun & Binui invested in it in September 2020, it already reflected the company’s valuation at $1.5 billion. Since the deal went through, Shikun & Binui earned more than triple its investment (3.2), or an increase in share price of 220%. In a report published prior to the IPO, BladeRanger noted that its valuation in the deal didn’t properly reflect the company’s true value, mainly because it was signed at the beginning of the coronavirus (Covid-19) outbreak - and the timing was problematic and hampered the company’s ability to raise funds. In December 2020, Shikun & Binui realized an option that allowed them to invest $1 million at a 20% discount off the issuing price. BladeRanger’s leap in valuation arrived when the company issued its shares on the stock exchange, on Dec. 6, 2020.

In the right place at the right time BladeRanger’s leap in valuation can be attributed, with some degree of fairness, as simply hot air inflating the capital market. That’s a tempting enough reason, but it doesn’t explain the exceptional return compared to other companies that raised money during the same period of November and December 2020. BladeRanger is in the right place at the right time. The company, which develops robots to autonomously clean solar panels, is enjoying the fact that the renewable energy solar sector is scorching. The solar panel market is enjoying strong growth and yearly revenues which have already passed the $120 billion mark. The yearly growth rate of the solar panel market in 2018 and 2019 stood at 12%, and it is estimated to continue to grow into the double-digit figures over the coming years. So it’s not a surprise that those solar panels will need cleaning, and not simply for aesthetic reasons. Dirt and dust which accumulates on solar panels causes a large decrease in efficiency of electricity output, which is where BladeRanger fits in. While their robot is still at the beta testing stage, it plans to be finished during the second quarter of 2021. The company expects to move to the product engineering stage during the third quarter, and begin to sell its pilot product during the first quarter of 2022. Its production schedule is similar to the expected release of its cloud-based solar panel monitoring and management system that it is also working on. Blade is developing other products as well, among them drones to clean solar panels, although they are still at the initial development stage. The significance of these milestones outlined in its report mean that the company’s yearly financial revenues will remain at zero during 2021. In an era like today, that news doesn’t exactly deter or bother investors. Perhaps, just the opposite. At Blade’s current stage, It would be expected to be turning to venture capitalists to raise money. That type of investment process would have assisted Blade to reach maturity prior to going public, with a proven product and initial sales. However, due to the current market environment, Blade managed to raise capital that will allow it to continue its activity and ability to develop its products, all at a value which its shareholders wouldn’t have dared to contemplate a few months ago. It’s easier for investors to justify purchasing shares of a company that’s losing money than to justify buying shares of a company that’s priced at extremely high multipliers. Paradoxically, purchasing a losing company’s shares is a sort of solution to the cognitive dissonance that arises in those who are standing before a dilemma of whether or not to purchase a company's shares at a price that embodies a high multiplier.

Thanks to the great market potential that rests in the products that Blade is developing, the idea that the “dream” may be realized makes the share price almost seem meaningless. In the event that Blade becomes a significant player in the solar panel cleaning market, its current market valuation will seem ridiculous. The point is that it will look equally ridiculous if Blade isn’t able to translate that potential into significant revenues and profits.

Now, after Blade’s shares left most other companies’ 2020 TASE IPOs in the dust, the only thing left for the company, which is managed by Assaf Friedler one of the company’s founders and shareholders (who holds a 19.3% stake in the company), to do is to present its post-sales receipts. An additional Israeli company that is active in the field is Ecoppia Scientific, which carried out an IPO in November 2020 and since then its shares have risen 21%, a meager increase compared to Blades. This is despite the fact that Ecoppia registered NIS 8 million ($2.4 million) in revenues in 2019. However, during the first half of 2020, its revenues shrunk to only NIS 673,000 ($205,000). The gap between the pricing of Ecoppia’s shares which were traded at a valuation of NIS 1.4 billion ($420 billion) between BladeRanger, which was issued at a valuation of only NIS 93 million ($28 million), led investors to buy up the latter and caused the value of Blade’s shares on the stock market to skyrocket.