The Blame Game: Who will be liable when autonomous vehicles crash?

Israel’s Ministry of Justice asked the public to weigh in on regulations for self-driving cars. One thing’s for certain — expect insurance premiums to rise

The Ministry of Transportation often prefers to simply turn a blind eye to the plethora of autonomous vehicle experiments that take place in Israel. Sometimes it is for the better, like when it prefers to stay away from ribbon-cuttings and taking credit for Israeli genius, but occasionally it is for the worse like when Mobileye’s autonomous car ran a red light.

In contrast to the Ministry of Transportation, whose senior officials are always happy to put their names on anything that is related to the autonomous car market, the duties the Ministry of Justice deals with are far more critical and practical: It has to determine what will happen when autonomous vehicles that drive on Israeli highways get involved in an accident?

The Justice Ministry last week released its first call to the Israeli public “to assume a position in the field of damages and insurance.” While the general public is unlikely to turn to the Justice Ministry offering a firm opinion on the matter, insurance companies will certainly do so by the end of the month for a very simple reason: while autonomous vehicle manufacturers promise an accident-free future, in reality such cars aren’t yet completely safe and raises quite a few questions, such as what happens when a pedestrian jumps into the street, or what the future will look like when for several decades autonomous vehicles will have to share the road with human-operated vehicles regular vehicles, and who will be responsible when a driverless car will have to “assume liability” for a car accident. Although the ministry’s document isn’t lengthy, it fascinatingly described Israel’s real attitude towards autonomous vehicles, and particularly the rising fears over what will happen when Israeli drivers first encounter autonomous vehicles on the road. Frightening forecasts predict expensive insurance plans Most of the ministry’s emphasis appears in the clauses that relate to the unique characteristics of autonomous vehicles, specifically to the complications that they raise in regard to liability in the case of damages. Despite the high level of detail, the document doesn’t provide answers to the infinite number of problematic issues that may arise. One of the primary issues the document raises is who’s to blame in the case of an accident when there is no human driver? Who will need to pay in case of damages? Will it be the car’s owner or the car’s manufacturer? Global automakers are likely to refuse to pay for system failures, which will require a certified inspector to investigate any accidents, even if the damage only costs a few thousand shekels. Another scenario relates to cases in which the human driver does take responsibility, but it isn’t clear to what degree. Self-driving vehicles are divided into different levels of autonomy, ranging from one to five, with five being fully autonomous. In level four, the human driver takes control of the vehicle only in an emergency, in which case an entire new calculation of the equation is required to determine to what degree the driver was responsible, since it’s unclear at which stage the human driver will intervene, when the vehicle’s system alerts the driver to intervene, or how much discretion the driver has, or whether their involvement was even necessary or not. Situations may arise where a driver of a level four autonomous vehicle will have intervened in the driving process, causing the vehicle to be involved in the accident. It could be argued that the vehicle could have resolved the problem on its own, without assistance from the driver, but then insurance company investigators will have to be even more clever and connect to the vehicle’s computerized system to assess whether it was the driver or the vehicle that caused the accident. Those types of scenarios are an actuary nightmare for insurance companies and it isn’t yet clear how Israeli insurance companies intend to cope with situations that will arise in the next five to 15 years. What is safe to say is that these scenarios will likely cause insurance prices to skyrocket. 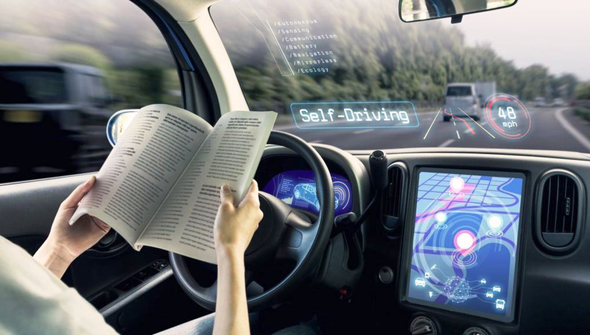 Insurance companies, car manfacturers, and importers are all concerned over who will take responsibility for accidents caused by autonomous vehicles. Photo: Shutterstock
What happens when a vehicle is “too smart”? Another interesting chapter of the ministry’s document relates to the vehicle’s artificial intelligence system, and how it relates to the causal connection, or the ability to prove the cause and effects in a car accident. According to the document, artificial intelligence is a learning intelligence, and therefore “the programmers have no ability to foresee how the computerized systems will respond, and similarly it is impossible to foresee how it will operate the car, in any given situation.” In light of the fact that we are dealing with a car whose behavior is unpredictable, it’s impossible to prove the causal connection, or the process, and thereby it’s impossible to prove whether there was negligence. Additional chapters relate to the judicial processes that involve proving which party is guilty i.e. what happens when two drivers stand in court, each providing a brief explanation, and the judge decides which party is guilty. For autonomous vehicles, that process simply isn’t possible and the document outlines that any court hearing that is related to accidents involving autonomous vehicles will be particularly expensive because they will need to prove who’s guilty by relying on highly advanced technological tools that will be obtained directly from car manufacturers, who will not attempt to explain who is guilty but rather which component of the car’s super-complex system failed and caused the vehicle that on paper is incapable of causing an accident to get into a crash. In the case of death, the situation is even more dire. The information can be protected in a “black box,” but storing and protecting that data will also be very costly, and will only add to the accumulated legal expenses. Total responsibility of property damages An additional interesting chapter directly relates to bodily harm, the most dire topic. In typical car accidents where a person is injured, an investigative process of identifying the liable party is relatively simple, since the vehicles are driven by people. However, in this case, the problem is far more complicated, since the vehicle is not driven by a person. So who is driving the car? In such a case, the car may not even be considered a vehicle but instead a general consumer product, meaning that a person who was injured by an autonomous car is analogous to that of a person who was injured by an inanimate object that was not operated by a human. But an autonomous car isn’t a refrigerator: it isn’t a “stupid” vehicle, and the law is looking for those who can assume responsibility, whether that’s the car manufacturer, that was responsible for programming the accident-prone system; the car owner, who is at fault for choosing a certain type of autonomous vehicle; the company that is responsible for the car’s maintenance as well as its autonomous systems, which may have failed; or even an operator in a remote control room. The latter case would expose companies such as Mobileye to liabilities it never took on in the past. The bottom line is that even the government doesn’t have all the answers. That’s why it is turning to the public and asking their opinion, even if the entire process can be very dangerous and can open a can of worms that no one in the automobile industry wants to deal with. Nowadays, car importers enjoy the familiar status quo in which cars are operated by human drivers, and when they have accidents, the person is either guilty or not, and then the car is repaired by the importer garage using its replacement parts. But what will happen when the importer will become part of the autonomous vehicle “chain of blame”? What will happen when representatives from Hyundai, Mercedes Bentz, Kia, or Nissan will need to appear in Israeli courts and explain the essence of their vehicle's technology which caused an accident where people were killed? That scenario will expose car importers to lawsuits - since they are representatives of the manufacturing company - and for the first time place them in a situation where they will have to argue with insurance companies over the definition of who exactly was responsible in the case of a car accident. If insurance companies win and manufacturers are the ones to assume responsibility for damages or casualties, then car importers will be forced to enter a whole new world of burden of proof, and the process may prove to be one of the most difficult in their history.
Recently Read