If someone chooses an electronic bracelet over a hotel, it means they can self-isolate at home

TAGS:
Israelis returning home from abroad have a new option that will exempt them from being sent to a quarantine hotel: They can wear a bracelet monitor that will notify authorities should they violate a mandatory isolation period. The pilot program began on Monday with 100 tracking systems available at Ben Gurion Airport, where traffic has dropped dramatically due to restrictions meant to reduce the risk of Covid-19 variants entering the country. 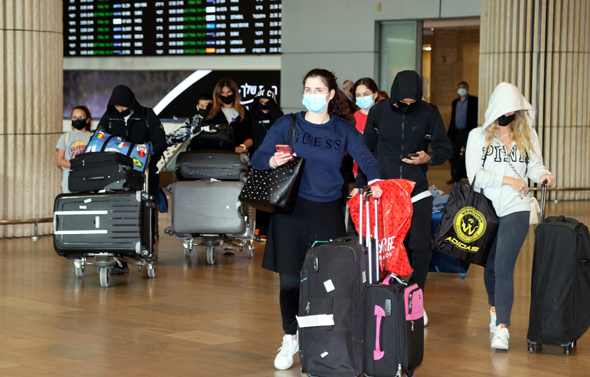 The arrival hall at Ben Gurion Airport. Photo: Yariv Katz
Incoming passengers have been forced to stay at hotels, paid for by the government, for up to two weeks to make sure they are virus-free before they can move around freely. Should someone choose the new system - which includes an electronic bracelet, a smartphone and a wall-mounted tracker - they can self-isolate at home. "We said we want it," said 44-year-old Alejandro Quil, who wore the slim, lightweight and waterproof bracelet on his wrist. "They gave us the service, it's great for us so we won't have to go to a hotel, so we will can do the quarantine at home as it should be." The system alerts the authorities if someone removes the bracelet or ventures too far from the home monitor.

"There is potential for the pilot to quickly expand into a project consisting of thousands of units for more wide scale use to assist in quarantine compliance in Israel," said SuperCom , the company behind the technology.

Data has shown that Israel's vaccination rollout - considered the best in the world - sees two doses of the Pfizer shot cutting symptomatic Covid-19 cases by 94% across all age groups, and severe illnesses by nearly as much. Despite this, authorities are still on high alert as groups gather over holidays like Purim and Passover, which will occur at the end of the month.