In Myanmar coup, old Israeli weapons exports are still in the picture

Israel halted its defense export to Myanmar in 2018, but sales made in previous years are now coming back to haunt it

The military coup in Myanmar last month gave birth to many iconic images and moments. Like the photo in which soldiers blocked the main, multi-laned, entrance into the Parliament building in the completely deserted capital Naypyitaw. Another moment, which went viral, saw a mask-laden gym instructor going through her aerobics routine while armoured vehicles were storming a government compound in the background.

In a far less shared photo taken by AFP, a masked soldier is seen sitting behind a machine gun on the roof of an armoured vehicle that is driving through the capital. That photo does, however, is closely linked to Israel, as according to the New York Times, the armoured vehicle it depicts is manufactured by Israeli company Gaia Automotive Industries.

Gaia CEO Shlomi Sharaga said in response that he hadn't seen the photo and that all the company's export activity is conducted according to its licenses from the Ministry of Defense. 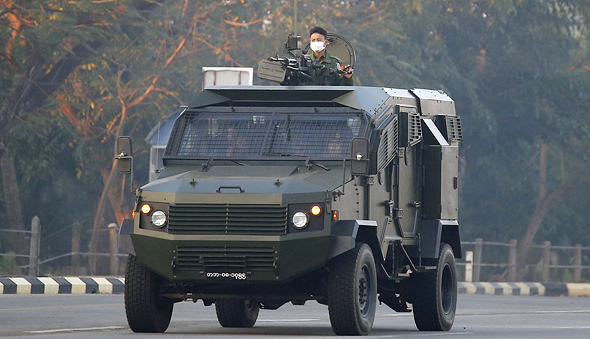 An armoured vehicle manufactured by Israeli company Gaia Automotive Industries in use in Myanmar. Photo: Getty

The armoured vehicle arrived in Myanmar before Israel halted its defense export to the country in 2018 due to the genocide of the country's Muslim Rohingya people. However, the fact that the vehicle is being used in the coup is a prime example of how difficult it is to control the way in which defense exports are used and how problematic, not to say irresponsible, Israeli export can be when it comes to certain countries.

Gaia's armoured vehicle isn't a unique example either, with the New York Times reporting that the Myanmar military, which now controls the country, is also using Israeli tracking drones and offensive cyber systems, alongside additional systems and technological tools from the U.S. and Europe.

Israeli human rights lawyer Eitay Mack, who advocates for limiting the export of weapons from Israel, doesn't believe Israeli equipment was of any relevance in the Myanmar coup. He does note, however, that the presence of such systems in the country is problematic as it could be used by the military to suppress protests in regions that are home to ethnic minorities.

"The military is always in control there," Mack told Calcalist. "It doesn't need some phone hacking tool or tracking drones to know where Aung San Suu Kyi is located. This wasn't a violent coup. The military just turned up and arrested her and her party members. The protests that are currently taking place are going ahead because the military is allowing them to. The military controls everything. There have been several dozen deaths, but as far as I know there isn't an order to stop the protests or kill protesters.

"The problem is that you can't know what might happen in the future, and what this equipment might be used for if, for example, a Civil War breaks out in the Ethnic regions. Israeli weapons and systems could be relevant to persecution in Burma or fighting in conflict regions."

Mack said that in September 2015 the Myanmar commander-in-chief of Defence Services, Min Aung Hlaing, who is now the country's de facto leader, visited Israel and signed agreements to export defense equipment from the country. The export was halted after a couple of years. "At the beginning of 2018 all the Israelis left the country, as well as the defense and civil companies, because they understood that they were in danger," added Mack. "All the defense exports were stopped, but there is a problem with the equipment that is already there. According to international law, you can be convicted of aiding in crimes against humanity even if you provided equipment prior to the crimes taking place. It wasn't necessary to wait until August 2018 to understand what was going on. There were several cycles to the Rohingya genocide, with the first starting in 2012 and the current one beginning in October 2016 when they began burning down villages. A U.S. and European embargo was already in place at that time."

According to the New York Times, the Myanmar military's budget includes the acquisition of software used to extract information from Apple computers developed by BlackBag Technologies, a company acquired by Israel's Cellebrite last year in a deal valued at $33 million. Cellebrite told the NYT that the company halted its sales to Myanmar in 2018 and that BlackBag hasn't been involved in any such activity since being acquired by the company. “In the extremely rare case when our technology is used in a manner that does not meet international law or does not comply with Cellebrite’s values, we immediately flag these licenses for nonrenewal and do not provide software updates,” a spokeswoman told the Times.

Another Israeli technology that was sold to Myanmar between 2015 and 2018 was military-grade surveillance drones made by Elbit Systems. The Times reported that last year, an ethnic armed group fighting the Tatmadaw in far western Rakhine State said it had seized an Elbit drone that had been flying over a battle zone.

U Kyi Thar, the chief executive of Myanmar Future Science, told the Times that his company began repair work on the drones in late 2019 and that they ordered the spare parts from Elbit, but the company denied the claim, saying it has had no dealings with Myanmar since 2015 or 2016.

Mack said Elbit's claim makes sense. "The Elbit drones in Myanmar are of an older version that was sold before the defense export to the country was stopped and they are very popular around the world. They are relatively simple and it is easy to acquire spare parts from many places. Elbit stopped the export, didn't transfer spare parts and didn't know of the transferring of spare parts."

Mack said that despite the halting of export of defense equipment to Myanmar, Israel is now paying the price for agreeing to do business with the controversial regime between 2015 and 2018.

"Israeli companies shouldn't have entered Burma in the first place in 2015 and they are deservedly being criticized now," said Mack. "You shouldn't sell to these types of countries in which there is no way to monitor what the weapons are being used for."